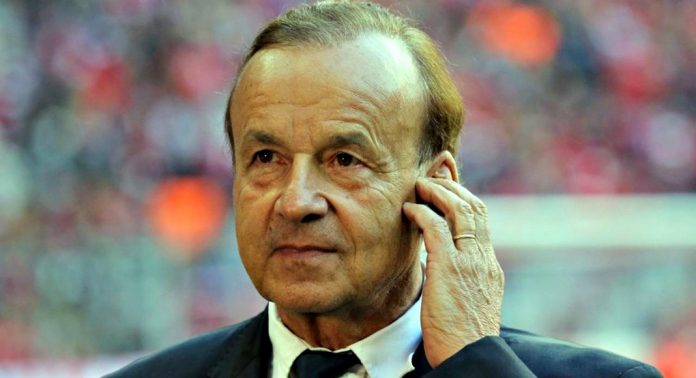 Nigerians who are waiting for the exit of Franco-German Gernot Rohr from the Super Eagles job may heave sigh of relief soon as four African countries want to hire him.

Rohr, 66, led Super Eagles to the semi final of the just concluded 32nd Africa Cup of Nations in Egypt and won the bronze with a 1-0 defeat of Tunisia in the Third Place match last Wednesday.

However, since Nigeria failed to reach the final, there have been calls for the termination of Rohr’s contract. He is largely perceived to have failed at the tournament despite meeting the target of a semi final finish at Egypt 2019.

THISDAY learnt at the weekend that Morocco and three other countries have made enquiries about the gaffer and want to hire him.

If the coach accepts to leave, this will save the NFF the payment of the $1million pay off clause in his contract that is not due to expire until next year.

Despite the clamour for Rohr to be sacked from the Eagles job, an insider at the Glass House in Abuja confided in THISDAY that the federation does not have the capacity to cough out N360 million to pay off the coach.

“Where will NFF bring the $1million pay off clause in Rohr’s contract to end the romance with him even though I am aware that the leadership of the federation is no longer confortable with the man’s tactics,” a top football administrator confided in THISDAY yesterday from Abuja.

When asked if there was no way the contract can be terminated without having to pay Rohr, the official who spoke on condition of anonymity blamed NFF’s legal department for setting a semi final target for the coach while reviewing the contract after qualifying Nigeria for the World Cup in Russia last summer.

“Nigeria is a big country in African football. I don’t know why anybody will set an AFCON semi final target for Gernot Rohr? We have won the AFCON title on three occasions, reached the final about four times and won the third place eight times with the bronze from Egypt on Wednesday. Winning the title in Egypt would have been the target otherwise we will not be in this situation now,” observed the official.

He dismissed the tactics adopted by the coach in Egypt as poor and unfamiliar with Super Eagles flair.

“I don’t want to hear all these talks of young team, young team any more. Our Eagles were simply poor in tactics despite winning the third place match against Tunisia. If Rohr continues with the team for the next five years, I don’t see anything improving our playing pattern,” he noted.

Under Rohr, Nigeria has recorded 20 wins in 35 matches, drawn five and lost 10 since he took charge of the team in 2016.