The air of the National Assembly was fouled last week as members of the Islamic Movement of Nigeria (IMN) invaded the Legislative House and caused havoc, report Deji Elumoye and Shola Oyeyipo

What started as a peaceful protest by hundreds of members of the Shiite religious sect, the Islamic Movement of Nigeria at the main gate of the National Assembly, last Tuesday, snowballed into a crisis situation with the sect members overpowering the few security men at the first gate (Mopol Gate) before trekking the one-kilometre long road to the second gate where security had been beefed up to resist the sect members gaining entrance to the White House main building of the National Assembly.

The IMN sect members had in the past paid several visits to the main gate of the legislature, where they usually had peaceful protests for hours before retreating. However, their protest last Tuesday took a dimension for the worse.

Some casualties were recorded in the course of the protest. These include destruction of properties including five cars and about seven policemen sustaining serious injuries in the hands of the Shiite members, who insisted on forcing themselves through the second gate and injured the policemen in the process.

The policemen who sustained various degrees of injuries were first treated at the National Assembly clinic before being moved to the National Hospital in Abuja for further treatment.

The Director of Medical Services at the National Assembly, Dr. Bashir Hamza, who confirmed the treatment of the wounded policemen said: “The seven were brought here as an emergency. As usual, when patients come like that we don’t have to confirm whether it is a staff (member) or a visitor; we just first of all rush to save the life. That was what was exactly done. As soon as they were brought in, we had doctors on ground that quickly received them. There were other medical personnel also on ground that attended to them.

“One of the patients had a cut, which looks like knife cut on the head and was bleeding profusely. That was immediately attended to, to stop the bleeding. There was another one with gunshot wound on the left shoulder he was quickly attended to too.

He, however, went further to say, “In all the cases that we have seen, I think we have seen seven persons with various degrees of injuries. We made sure that they were stabilised, with the exception of the first one that I mentioned, who has been losing a lot of blood and has started becoming restless.

“In our medical knowledge, we know that people (patients) who start to become restless are getting out of control, probably the bleeding is much higher than we anticipated or there is internal bleeding in the head, because it is appearing (to be) swollen. That one is to be transferred to the Trauma Centre of the National Hospital (Abuja). That will be ensured, because we have ambulances on ground, ready for evacuation.

But the leadership of the National Assembly, in a swift reaction, ordered the immediate security beef up in the Assembly premises.

“One of the issues we have discussed is the security within the National Assembly premises. It is a matter that is being looked at, because parliaments across the world are not this porous”.

Adeyeye, however, submitted that National Assembly is a public place for all Nigerians, saying “All Nigerians reserve the right if they follow proper channel and procedure to come in here and meet with their representatives. But where there are breaches in terms of procedure and regulations guiding such matter, the matter will be looked at inside the chambers”.

Perhaps, the daredevil protesters, who were agitated that their leader, Ibrahim El-Zakzaky, who government has opted to keep behind bars despite court pronouncements to the contrary, is currently facing health challenges in his incarceration, were emboldened to make return to the National Assembly after their visit penultimate week.

El-Zakzaky had been arrested along with his wife, Zeenatudeen in 2015, following a clash with the Nigerian Army and the subsequent Zaria massacre, in which three of his remaining sons, as well as many of his followers, reportedly were killed.

Justice Gabriel Kolawole of Federal High Court, Abuja had on December 2, 2016, granted the fiery Islamic leader along with his wife bail and imposed a fine of N50 million on the federal government for the incarceration of the duo.

The sect members had threatened in April to change tactics in their demand for the release of their leader and his wife. So, in what seemed like making good their threat, they clashed with the security agents, who prevented them from gaining entrance to the National Assembly at a time when both chambers of the National Assembly were in session.

Piqued by the brutality unleashed on police officers and men, the Inspector General of Police (IGP), Mr. Mohammed Adamu, in a statement by Force Public Relations Officer, Mr. Frank Mbah, a Deputy Commissioner of Police, warned the protesting sect members not to test the will of the state. He also ordered a round-the-clock surveillance on the Federal Capital Territory (FCT) and adjoining states.

Also, the Federal Capital Territory (FCT) Police Command in a statement by Deputy Superintendent of Police (DSP) and Command spokesman, Anjuguri Manzah, said eight of its personnel were injured. The command accused the sect of an attempt to violently take over the National Assembly.

The invasion was one of the major issues raised on the floor of the green chamber the following day, Wednesday, July 10. Members of the House of Representatives called on the Federal Government to as a matter of urgency, engage the Shi’ite group so as to amicably resolve their grievances and avoid a repetition of what gave birth to the Boko Haram crisis, which the government is currently battling to curtail.

The advice followed the adoption of a motion of urgent national importance moved by the Minority Leader, Hon. Ndudi Elumelu on the invasion of the National Assembly by the group.

In his prayers, Elumelu had among other things called for a thorough assessment of the internal security of the National Assembly, compensation for officers, who were affected and hospitalised during the Tuesday invasion and that committees on Police Affairs and Internal Security should ascertain if security officers attached to the assembly were insured against occurrence such as what happened on Tuesday and if not to include them under group personnel accident scheme and workmen compensation.

But in their various contributions to the debate, the lawmakers tasked government to handle the situation with seriousness and prevent it from escalating.

Speaking against the background of his experience in the emergence of the Boko Haram crisis, the Chief Whip, Hon Mohammed Monguno representing Jere federal constituency, Borno State, said: “There are danger signals coming from the present crisis of the Shi’ite sect going about clamouring for the freedom of their leader.

“Those of us that are coming from Borno State, the epicenter of the Boko Haram insurgency, can vividly recall that the Boko Haram crisis started the same way the Shi’ite sect are now masquerading themselves in all the nooks and cranny of not only Abuja but all over the country in the name of marching for the freedom of their leader.

“There is need to nip this crisis in the bud so that it will not snowball into full blown blood crisis that is going to affect the whole country.”

Hon. Bamidele Salam representing Ede North, Ede South, Egbedore and Ejigbo federal constituency in Osun State, also urged government on the need for Nigeria to be very futuristic about the Shi’ite matter and “address the root cause of this brewing insurgence.”

He said, “The man El-Zakzaky whose freedom they are asking for, what we have in the public space is that he is being held against several pronouncements of competent courts of jurisdiction in Nigeria. Injustice anywhere is a threat to justice everywhere.

“I want to urge the federal government to please dispassionately look into the matter of this leader of the religious group and allow the rule of law to take its course while not condoning any act of violence.”

In the same vein, Hon. Onofiuk Luke representing Etinan/Nsit Ibom/Nsit Ubium federal constituency, who raised a point of order premised on Section 4(1) (2) of the constitution of the Federal Republic of Nigeria, said the debate on the Shi’ite invasion of the National Assembly should not be narrowed down to when the members of the legislature are threatened.

“It is very paramount that we must call a spade a spade.

“So, I am appealing that on this issue we should not only think of preserving only the sanctity of the premises, the chambers or the members of this legislative House. We should look at how to address this problem so that other Nigerians in other cities like Kaduna, in the city of Abuja, away from the National Assembly are protected.”

Contributing, Hon Dachung Bagos representing Jos South/Jos East federal constituency in Plateau State, said: “The federal government should rise to see that the issue of the Shi’ite group is treated with all seriousness, because so far as far as I am concerned, it has been treated with levity. We need to see how this issue will be treated as a national issue, because if we are not careful, another Boko Haram will rise from another angle.”

From the foregoing, it is crystal clear that the government needs to revisit the issue of the continued incarceration of the leader of the Shiite group, ZakZakky, despite several court orders for his release.

There is also the need for the leadership of the National Assembly to engage the leaders of the sect by inviting them over with a view to hearing them out. This will enable the legislative body to determine the next step to take with a view to nipping the brewing crisis in the bud.

Also, the security around the legislative arm of government needs to be given priority attention by the authorities. It is high time the Inspector-General of Police, Mohammed Adamu, took an immediate action in this regard. 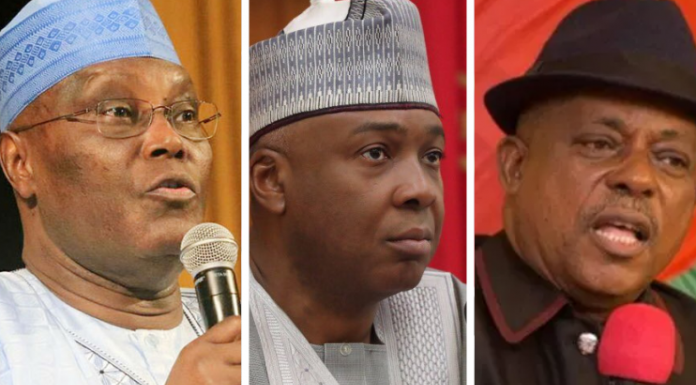