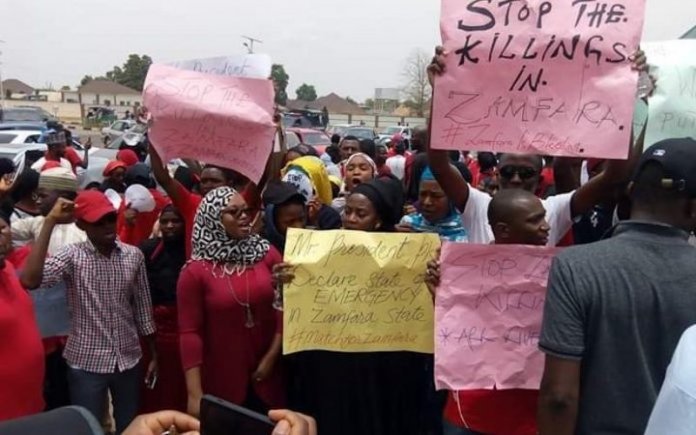 Villagers from Jirrawa community in Kaura-Namoda Local Government Area of Zamfara State, yesterday, in their hundreds stormed the Government House, Gusau, in protest with the body of a farmer alleged to have been killed by bandits earlier in the day in the village, News Agency of Nigeria(NAN) has reported.

The villagers were however led by their leaders, Muntari Abdullahi and Muhammadu Sani, who told NAN that the bandits invaded the village around 10:00 a.m. and shot indiscriminately.

According to Abdullahi, “We later realised that they have already killed Shafiu Inusa on his farm while he was trying to apply fertilizer on his plants after the rain of last night.”
He said the deceased was just recovering from a gunshot wound inflicted on him when the bandits attacked the village four months ago during which Shafiu’s father was murdered.

“It is exactly four months now when his (Shafiu’s) father was killed in a similar attack, because the wives of the old man are completing their four months stay at home as mandated by Islam.
“We gathered from his farm neighbour and brother that initially, one of the bandits came out and said, ‘anyone who knows he is guilty should run and who is not should stay’.

“Shafiu refused to run and when the others numbering over a hundred arrived, they opened fire and killed him. This is his remains that we brought here for the governor to see and know that this peace initiative is not working for us,” he said.

On his part, Sani said, “These criminals have always passed by our village without any threat or harassment until the last few months. So far, they have attacked us more than eight times and have killed many people.

“Even while on our way to Gusau today, we received a phone call that they also killed one Bala Danrabi, a vigilance group leader, who has always fought the bandits,” he said.

“I can confidently assure you that the peace initiative by Gov. Bello Matawalle which I lead in the state is working as can be seen in the release of kidnap victims and the repentance of several bandits, but that does not mean that the hardened criminals are no longer there, they are the ones that will perpetrate this now,” he said.

“I am in constant contact with bandits groups in all the bushes and our discussions have been positive leading to the peace we are now enjoying.

“On this Jirrawa issue, I have spoken with my contacts around the area and the repentant bandits promised to meet tomorrow and fish out the perpetrators of this latest attack and hand the culprits over to me; this is in the spirit of the partnership we are now enjoying,” he said.

The commissioner, however, said the police would not use force for now because of the ongoing peace initiative but that the command would await the outcome of the meeting to be held tomorrow by the repentant “bandits”.

Zamfara, Sokoto and Katsina States in Nigeria’s troubled North west have been gripped by violence in recent months, with hundreds killed in attacks locals initially linked to illegal mining and cattle theft.

The attacks have continued despite increased deployment of security to the area. The government, state and federal, merely refer to the attackers as “bandits” without saying exactly who they are.

Zamfara has long faced problems with armed groups stealing cattle, kidnapping for ransom and attacking communities, which has in turn prompted some local people to form vigilante gangs.
More recently, there has been a growth in informal mining activity in this mineral-rich region, which has attracted people from outside the state, further fuelling instability.

At the beginning of April, the government responded to concerns over increasing levels of violence, suspended all mining activities in the state, and deploying additional troops to the area.
The Nigeria Security Tracker, produced by the Washington-based Council on Foreign Relations (CFR), monitors levels of violence by collating local media reports.

This highlights a significant upsurge in killings over the past few months.
According to these figures, from the beginning of 2019, there have been 262 civilian deaths. In the whole of 2018 there were 288 and for 2017, the figure is 52.

The CFR data also indicates a sharp rise in killings of members of armed groups – which would include bandits, vigilantes and others involved in criminal activities.
However, the number of deaths each day is not as high as the 30 to 50 claimed by Kadaria Ahmed.

With 262 civilian deaths in the first 100 or so days of this year, that’s between two and three deaths each day – although the CFR data does indicate that this number is rising.