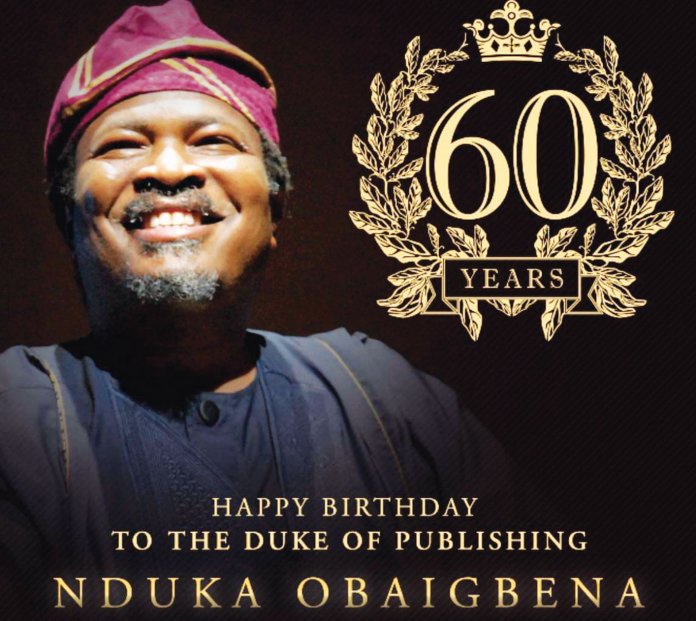 He used to be more controversial than he is today; the Duke. I hated him when I supported MKO Abiola and he was NRC spokesman and gadfly who always tried to sour our ointment. I hated him when I didn’t know him but heard fabulous stories about his escapades and all. But love him or hate him, you cannot ignore Nduka Obaigbena. We learn every day that it is important to stand up for something, than to always blend into the crowd because you don’t want to be noticed, especially in a society such as ours. Nduka Obaigbena, like a few men who have chosen to stand for greatness, chose to stand for something and it shows today.

I haven’t been one of his direct proteges. But some of those he has groomed and propped to prominence have been very instrumental to who I am today, and the little achievements I have had. However I came into more contact with the Duke himself in the last few months. I will explain.

As a young man I was very opinionated. From buying newspapers for my Dad and reading almost everything before I got home, I started forming my opinions about social justice. At some point I started writing letters about issues and sending to those newspaper houses. Concord. Guardian. Sketch. Tribune. Daily Times. Punch. Those were the newspapers that drew attention then. Since I then lived in Akure, one could only send these letters via post. None of my letters were published. I recall visiting Rutam House to directly submit letters and what would be called opinions a little bit later, as a young worker back in Lagos. Many times we submit these letters and back it with prayers. Though it’s tough now, but getting published was a major deal those days. Anyone whose name you saw in the papers had to be a legend of sorts. In short, I never got lucky. Those were in the real analogue days.

But then came THISDAY. Around 1999 my first letter was published by Mr Olusegun Adeniyi. I was ecstatic. It was some reply to what he had written the previous week. He edited out a bit of my usually long grammar and published it at the back of THISDAY. I believe I called to thank him because I just couldn’t believe it. I haven’t looked back since then. Through Segun I got to know Eniola Bello (now MD, THISDAY) and Simon Kolawole. These gentlemen sometimes published my right of reply, or helped to get my opinions published inside the newspaper. They were a relatable bunch; young and savvy then, even though older than me. They gave some of us a sense of belonging and I think this is true for many guys in my generation. They gave us a voice, and an opportunity to express ourselves.

Around the same time I would leave Citizens Bank where I had started my career, for Standard Trust Bank. I had struggled to leave operations directorate in the bank because marketing was where the sharp boys seemed to be. I’m the type that will always aspire no matter what. I was posted to Export Marketing department where I was trying to pull my weight. My posting was done by the Acting MD, but when the substantive MD resumed from his leave, all postings and appointments were ‘annulled’. That was the language of the day in 1997/8. I didn’t want to return to back office so I stuck around, only to be told by a few senior colleagues in the marketing department to shove off back to my back office. Around that very time I received a call from one of the guys I had trained in operations that a new bank, Standard Trust Bank, needed smart people. I didn’t think twice, or look back. Here I was in Citizens, a bank to which I was and still am very grateful for giving me a chance when I knew no one as a pimply-faced bare teenager straight out of school, but I was caught in between executive politics and I had no alignments. A quick interview with Akin Adenekan (then ED), and Wole Ajomale (my direct boss), and a meeting with the legendary Tony Elumelu at the Oyin Jolayemi Street, Victoria Island Headquarters and I was off to Standard Trust Bank Ikeja. I will meet great guys, mentors, superiors, subordinates and so on, who have shaped my life one way or another today. These are people like Kennedy Uzoka (MD UBA), Walter Akpani (MD Providus Bank), Henry Ajagbawa (former ED Oceanic), Obeahon Ohiwerei (then ED and later MD Keystone Bank), Akin Olaofe (ED) and many more. It was around this time I met Dele Momodu (also a close associate of the Duke), when I went after the Ovation account. I also met all the local government Chairmen in Lagos then and I remember Ganiyu Solomon (GOS), with whom I became a bit close.

This is the chain of human interaction. My little story is important, because just as Elumelu gave confidence to young people and pushed us to go for goals in banking, so also did Nduka Obaigbena push guys in the journalism world. Being a journalist used to be a drab affair, when writers and editors had no personality and were not the savvy opinion leaders and highfliers they have become today. Nduka changed the face of journalism in that way and we have people like Ijeoma Nwogwugwu, Bolaji Abdullahi, Waziri Adio, Victor Ifijeh and a raft of razor sharp people coming from that stable. To believe I have met so many of them! While I was in Lagos, I got so moved at times that I drove to the Apapa headquarters of THISDAY to interact with these gentlemen sometimes out of courtesy and sometimes to ensure some ‘serious’ opinion of mine got published. They were so welcoming and friendly and we remain close today… all of them.

So in a way, THISDAY, and Nduka Obaigbena, changed my life. I tried to get a space on the backpage of the newspaper – a prized gift to anyone – but haven’t been that lucky. However, some of these big media friends I mentioned above, have yielded their space to me entirely in the past. It was because of the confidence that TISDAY afforded me that I was eager to link up with Daily Trust in Abuja when I was transferred here by the great Dr Mike Adenuga, the Chairman of Equitorial Trust Bank, and today I write a regular column for Trust, every Sunday, since early 2016. I have never missed one day – though tucked inside the paper but grateful I am. I also contribute to Premium Times, another bevy of serious-minded intellectuals with stratospheric standards. I recall Dr Adenuga used to say I was one of the few who wrote on topical issues in the bank’s internal magazine when it was functional. I believe I’m heading somewhere with my life.

I will close with the story of Arise TV. When the idea kicked off, at some point they needed to broadcast from Abuja. Abuja being what it is, is full of civil servants who are not authorized to speak on any issue. Mr Chike Ogeah, another senior brother of mine gave Nduka my phone number. The Duke called in his usual respectful, backslapping way. For me, I wasn’t going to waste his time. I was honored to have him call me to appear on Arise TV as the idea took its tentative steps. I had last met him at the gig he organized for George W Bush, Tony Blair and Condoleeza Rice at the THISDAY Dome and I recall how approachable he was. He didn’t take particular notice of me until this call initiated by Chike Ogeah.

One day as the last campaigns were hitting up, I shot Mr Obaigbena a text one morning, reminding him of how I had assisted in giving AriseTV the first few appearances, and asking why he wouldn’t reciprocate now that I needed the exposure. His reply was swift and in no time I was speaking with Reuben Abati and other anchors. He must have liked my interview for he texted me about their plans for a presidential debate – which never materialized but I understand because it cost a lot to put these things together.

If I would summarize Nduka Obaigbena in a few words, I would say he is someone who tries to think of greatness for other people, not himself alone. He doesn’t do mediocrity. He is into creative disruption. He never forgets a favor, or a true friend. He is a go-getter. Never takes no for an answer. He is a lover of life. A real fun person. Those really close to him must be having a blast. Happy 60thto the media guru. Many more fruitful years on God’s earth sir. And thanks for always addressing me as ‘The Presidential Guru!’ during the campaigns. Voices like yours kept me going. Like you disrupted the media space, I wanted to disrupt the political space whether or not I had money. I wanted to overturn everything with the powers of my ideas, just as Tony did in banking. We are still on the project.

Fasua is a former Presidential Candidate of ANRP