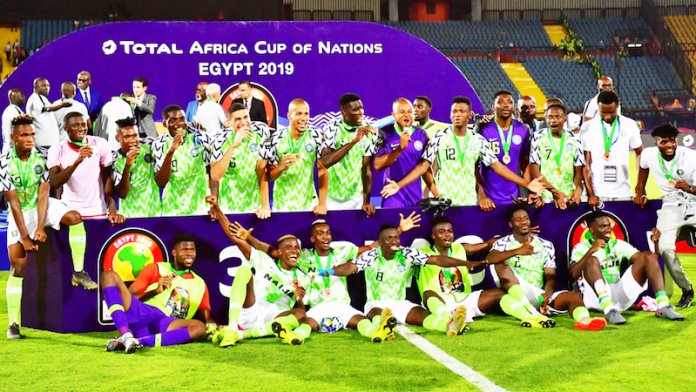 *Musa: Mikel, Ighalo will be missed

Nigeria’s Super Eagles’ third place finish at the just concluded Africa Cup of Nations in Egypt comes with a cash prize of at least $2 million (about N720 million) from the Confederation of African Football.

CAF had confirmed earlier in April this year that a total of $14.2 million would be shared between the best eight teams of AFCON 2019.

Algeria who emerged as champions earned $4.5 million while hosts Egypt – who were knocked out in the second round – get $670.000.

Algeria lifted their second ever trophy after narrowly beating Senegal 1-0 in the final on Friday night. The beaten finalists who are yet to taste continental glory, get $2.5 million to help ease the pain of defeat.

Tunisia also get $2milion as semi-finalists, while each of the beaten quarter-finalists (Madagascar, Ivory Coast, South Africa and Benin) get $800,000 each.

Apart from Egypt, seven other teams who crashed out in the Round of 16 get $670,000. They are Morocco, Uganda, Mali, Guinea, DR Congo, Cameroon and Ghana.

Angola and Kenya, the two third placed teams in the group stage that didn’t make the second round, earned $620.000.

Mikel, who made 88 appearances for the three-time African champions, announced his retirement from the national team on Thursday.

The 32-year-old Trabzonspor midfielder featured twice in the 2019 Africa Cup of Nations winning a bronze medal to add to other medals including an AFCON gold in 2013, an U-21 World Championship in 2005 and an Olympic bronze in 2016 among others.

Ighalo, who won the Golden Boot with five goals, also announced his decision to retire from the Super Eagles.

Despite making his senior debut relatively late as a 25-year-old in an international friendly against Uganda in March 2015, Ighalo has left his mark, with 16 goals in 35 matches.

The healthy ratio of one goal in two games ensures he is ranked as the seventh highest scorer in the national team’s history.

According to Musa, “As hard as it is to accept that you guys have retired from the National Team, it’s been nothing but a privilege and a great honour to play with you guys.

“Here’s wishing you nothing but the absolute best in your future pursuits. You will be greatly missed in the team John Obi Mikel and Odion Ighalo.”