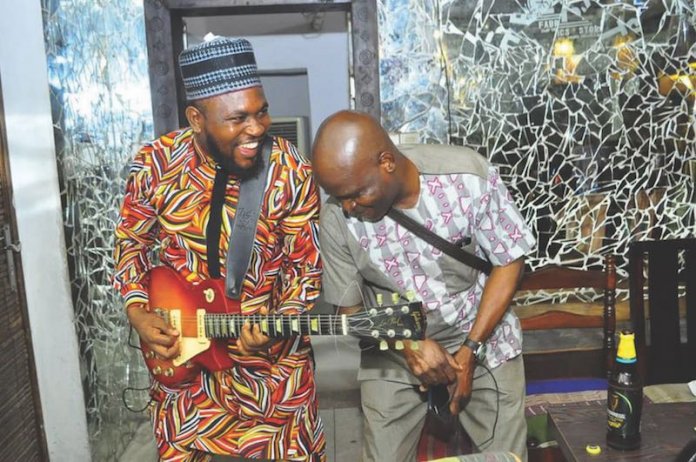 The rains kept pouring. Most drivers switched on the hazard lights as they drove past Bogobiri, the venue of the live jazz music, titled, “One More Night” in Ikoyi, Lagos. That Sunday was special not just because it was the first one for the month of June; it was to welcome music fans from the May break which was the month of Ramadan. Night-crawlers dwindle in attendance at fun spots at this period every year. Still, it was a good time for one of Nigeria’s most promising jazz acts, Adeh Gbolahan to get his groove on.

Whilst watching sky in hope that the drizzle would give way to a clearer skyline, Adeh called out from the passenger side. He had just arrived an hour before his much-anticipated show at Bogobiri, where folk, indie, rock, alternative and jazz musicians have performed over the years to an audience mostly made up of expatriates, celebrities and other elite music fans.Of course, the flood-prone situation on Maitama Sule Street kept music fans away but as soon as the rain subsided, they trickled in. It was a gentle reminder of the connection between infrastructure and night life which inevitably found its way into the light conversation with Tony Martins, the CEO, The Grey Company. With a keen interest in entertainment logistics and management, Martins had worked with the likes of Jimi Solanke and Duro Ikujenyo in the past decade.

Prepared to break the music fast, Adeh didn’t waste much time with the sound check. In a flash, the jazz ensemble was set for a scintillating night of performance. Adeh was on a “major key alert”, swift to hear when the sound wasn’t right using facing cues to reset his band members. From the classic to the contemporary, the young guitarist certainly knows how to relive Jimi Hendrix on stage without any line.

Some of the major highlights of the evening was Adeh’s effort to transport the audience from the melancholic tunes to the upbeat vibes. First, he started with smooth jazz, and moved on with Lionel Richie-inspired “Stuck on You’’ and later, travelled down more years to invoke the pop jazz tapping from the 1991 hit song, Kenny Thomas’ “Thinking About Your Love” and then revolutionising hip-hop on the jazz stage with his rendition of “Liberian Girl”. The night’s vocal-string wonder, a former reality show contestant, Mimido poured out some soulful serenades as the opening act. “One More Night with Adeh Gbolahan” is powered by The Grey Company and comes alive every first Sunday of the month.
Pix: Afro-jazz musician Adeh (L) on d guitar with culture activist, Jahman Anikulapo at Bogobiri House, Ikoyi, Lagos.jpg