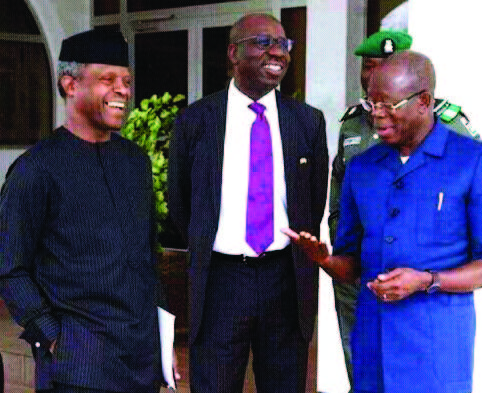 The continued feud between the Edo State Governor, Godwin Obaseki and his estranged benefactor and National Chairman of the All Progressive Congress, Comrade Adams Oshiomhole, may spell doom for the party in the state, writes Adibe Emenyonu
It is no longer news that members of the All Progressives Congress (APC) in Edo State are at war with one another. However, when the party won all the 24 state constituency seats in the last general election, there were mix reactions.

First, to the APC, the victory would signpost a harmonious relationship between the executive and the legislature especially for quick passage of bills. But in the eyes of the opposition, the new development would kick-start the era of a rubber stamp assembly, which would be readily used to do the bidding of the executive arm of government.

Incidentally, none of the above sentiments came to fruition, as the assembly is neither ‘a yes parliament’ nor harmonious. Rather, the assembly is a House divided against self, based on the current logjam within the Edo APC over, who becomes the speaker of the House.
Unfortunately, the fight has pitted the governor, Mr. Godwin Obaseki on one side against the APC national chairman, Comrade Adams Oshiomhole, on the other hand.
But what has continued to baffle political watchers is, why the fight in the first place? One, Oshiomhole is Obaseki and conversely, the one who brought in Obaseki against all odds and political permutations.

This is because in the election that brought in Obaseki as governor, Oshiomhole campaigned as if he was running for a third term. Similarly, Obaseki until the fight became pronounced had consistently respected Oshiomhole. What then is the bone of contention?
Beyond the disagreement on who becomes the speaker, which many believed is the reason for the political war, there seemed to have been some surreptitious moves behind the entire issue, which their followers may not be aware of.

For instance, it is being alleged in some quarters that the disagreement has something to do with business interest owned by the two, which has snowballed into political interest; and since all is fair in war, both gladiators decided to deploy all manner of tactics to undo each other, using politics as a cover.
The way it stands today, the political difference between Oshiomhole and Obaseki is irredeemable except there is divine and genuine intervention by stakeholders within and outside of APC.

For the stakeholders to do this, they first must ask the two parties to sheath their swords, avoid blackmail and counter blackmail by them and their followers.
Although none of the key actors has come up to say in concrete terms, the reasons behind their quarrel, however, available information indicated that the over bearing attitude by the two might have given way to the war of attrition.

First is the constant interference of Oshiomhole on the administrative flow of Governor Obaseki following the intermittent report he was bombarded with by some APC members, who refused to acknowledge that there is a new sheriff in town. To them, the old ways they are used to must continue, which the governor refused to oblige.
Obaseki, on the other hand, has displayed intolerance in the way and manner he handled political situations in the state. Hardly had he assumed office than, he threw the APC Youth leader, Osakpamwan Eriyo into detention over a disagreement that could have been settled amicably.

Not only that, his penchant to always be in confrontation with party men and women, when it comes to patronage further created distrust and suspicion.
As this was going, loyalists of both men aligned themselves with their respective principals, which gave room for rumours, gossip and hearsay among others.
With this, talks began to fly on how APC lost in Edo during the presidential and National Assembly elections, heaping the blame on the governor’s unbending attitude towards politics and party members.

There was also talks about 24/24 after the House of Assembly, which is being parroted as a feat by Obaseki’s men as a superior political gain above Oshiomhole. In a counter move, they also said the APC loss in Edo should not be blamed on Obaseki but that Oshiomhole too should share from it being the national chairman of the party and an indigene of the state.

This long drawn battle prompted the plot by one of the parties to outsmart each other, which the leadership of the state assembly provided a veritable platform, which has hitherto created a political crisis in the state and drawn the attention of the National Assembly.
Following the insistence of the governor and his supporter that the inauguration of the assembly was proper, and the outcome of the House of Representatives, which ruled otherwise, Obaseki is said to have been making frantic moves to opt out of the party.

Sensing it would take the head of a Carmel to pass through the eye of a needle than for him to get a second teem ticket, Obaseki is alleged to be making frantic effort to leave the party probably, because of the friction already generated.
Charles Idahosa, an APC chieftain in Edo gave the hint during a media briefing when he asked those fighting Obaseki to let him be, otherwise he would be forced out of the party. He threatened that should the governor decide to move out of the party, because of the activities of those he described as Abuja politicians, he would be one of those to follow the governor.

Idahosa may have spoken in a vague language, it is on record that Obaseki has been making secret moves to join the PDP and fly their flag in the 2020 governorship election in the state, even though the overtures were believed to have been made by the PDP.
To actualise this, Obaseki is alleged to have met two governors of the opposition PDP to facilitate this moves by lobbying their national leadership for a possible place should the APC make real its threat to deny him the re-election ticket.

It was gathered that one of the meetings took place at Oghara between him and two PDP chieftains – one a sitting governor and the other a former governor. The other meeting was said to have taken place at an undisclosed location.
At the end of the meeting, a party chieftain who was privy to the encounter, said the only snag hindering the planned move from being actualised yet is the feeling by the PDP leaders, who are afraid of a repeat performance of what is currently going on in the APC.
But the Special Adviser to Edo State Governor on Political and Community Matters, Chief Osaro Idah, has denied any plan by Obaseki to leave the APC ahead of the governorship election in the state.

In a statement issued in Benin City, Chief Idah said “Our attention has been drawn to a news item published by a national daily (not THISDAY), stating that Governor Godwin Obaseki met with two Peoples Democratic Party (PDP) governors, to strategise on a fresh platform to run for re-election, should the National Chairman of the All Progressives Congress (APC), Comrade Adams Oshiomhole deny him the APC gubernatorial ticket.
“Media houses and members of the public should be wary of stories like this planted by detractors of the governor and the Edo State Chapter of the APC. These persons are threatened by the wide acceptance and support, which the governor enjoys from his people.”
The governor’s aide added: “We state categorically that Governor Obaseki has no intention of leaving the APC, where he has firm support at the state level and across all local governments, wards and units of the party.

“In Edo State, the governor’s popularity within the party and across the state is overwhelming and the few deviant troublemakers within Edo APC and their sponsors in Abuja are warned to desist from the irresponsible act of trying to cause trouble in their own home while seeking refuge elsewhere.”
But the APC national leadership is said to be shopping for a replacement should things completely fall apart and the centre no longer hold.
From a reliable source, two names have been penciled in as possible replacement for Obaseki. They are the immediate past deputy governor, Dr. Pius Odubu and a business mogul, Capt. Hosa Okunbo.

But the question is: does Obaseki have the political clout to move to another party not necessarily PDP and win election? Can APC win election without Obaseki going by his present popularity with the people? Give or take, both need each other to remain relevant and sustain their hold on power.
Nevertheless, should the situation remain irreconcilable, APC in the state will be the greatest loser, because already, the PDP is waiting in the wings to take advantage of the crisis to capture power in the state.

This is because few days ago, the PDP in a statement, has described the assembly crisis as not only sad but an unpleasant development.
The statement signed by the party’s Publicity Secretary, Chris Nehighare, said “We are embarrassed by the ugly and unending crisis in the APC-controlled Edo State House of Assembly”, noting that the unnecessary power show was not in the interest
“We have always maintained that Edo State deserves better than what the APC is offering. The poor and lamentable state of affairs in the state underscores the need to vote out the APC government in the state. A party and government that cannot manage a House of 24 persons cannot manage the state.

“We call on all concerned in the assembly crisis to stop this ego trip and blame game and face the serious business of good governance in the interest of the people. Edo State is too sophisticated to be used as political guinea pig of supremacy between party and government’s strength.”
From all indications, the best as suggested is for both warring parties to bury their hatchets in the interest and benefit of the people they profess to govern. Anything to the contrary might spell doom for the ruling party.
Pix~: Osinbajo, Obaseki and Oshiomhole…will they ever work together again.jpg