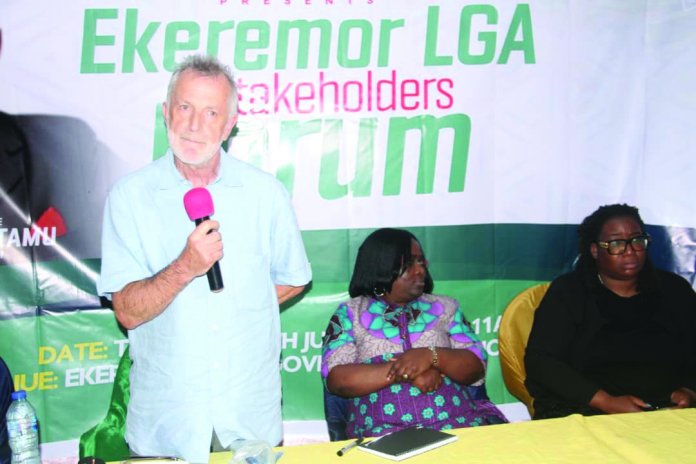 Michael Watts is on the board of the International Committee of Bayelsa State Oil and Environmental Commission, BSOEC. He is a 1963 Professor of Geography and Development Studies at the University of California Berkeley United States. He received his PhD in 1979 from the University of Michigan on his work on Agrarian Change and Politics in Northern Nigeria. Retiring from the classroom in 2016, Watts is a leading critical intellectual figure of the academic left often described as “fiercely original mind and brilliant theorist.” He recently toured oil producing communities in Bayelsa State, which ended with an interactive section with stakeholders in Yenagos, Bayelsa State. Stanley Nkwazema reports

Professor Michael Watts is concerned about the environmental degradation of the Niger Delta by oil companies operating in the area, particularly in Bayelsa State, where oil was first discovered in Oloibiri in 1956. Watts first visited Kaima, Kolokuma, Bayelsa State in 1972. He again returned in the company of late Niger Delta Environmental activist, Oronto Douglas. He has now taken up a position on the international board of BSOEC.

He was at a recent interactive section with Niger Delta stakeholders in Yenagoa, and kicked against Shell Petroleum Development Company of Nigeria’s statement that it had made financial contribution to the development of host communities in Bayelsa state to the tune of over N23 billion under the GlobalMemorandum of Understanding GMoU. Watts picked holes in the statement and the need for the companies to go beyond rhetoric. He said: “They need remediation. What I mean is that all the areas that have suffered from the spill. That is actually quite long and complicated and a costly process too. It means that land has to be improved and rested. It means forests have to recover. It also requires a change in the behavior of the companies but also of the government and the GMoU with the host communities and how they have often failed.”

The SPDC General Manager, External Relations, Igo Wali, who spoke through SPDCs External relations Manager, Corporate Lands Management, Trevor Akpomughe during the 2019 media launch of Shell Nigeria Briefing, noted said the amount represented about half of the company’s GMoU spent in its host communities in Niger Delta since the introduction of the community development model in 2006. Again, Watts explained that “there is a great deal about the investigations and how the oil spills are accessed. These are clearly inadequate. On this issue, it is clear that government needs to improve on its performance. There must be tighter and better regulations in other for companies to be held to account and improve their performances”

The priority of projects in Bayelsa State is set by 14 GMoU clusters. But Watts is not impressed because “The whole process of compensation is central to all the disagreements any of the communities have with the oil companies. They all have complained about the Joint Investigations processes. For example, they did not understand first of all the way in which compensation was calculated.”

Secondly, after touring eight local council areas of Bayelsa State and speaking directly with the community leaders, Watts told THISDAY that the communities are unhappy, considering the way they trade blames with oil firms on the cause of the spills. He said: “Sometimes, the JIVs say the spills were as a result of sabotage and yet the communities often argue strongly that it was operational failure and corrosion of the equipment. So, the question of compensation is a very important aspect that need immediate action because in some cases there are oil spills which occurred many years ago for which there has been absolutely no compensation whatsoever. And when the compensation is given, the means by which they are calculated are very unclear and are often made by the companies without the participation and input by the communities. This is an area that requires a great deal of work.”

Immediate measures to be taken by the oil Majors

Even as Shell, during his briefing, said security remained a major challenge as a result of continued crude oil theft and vandalism of oil and gas facilities in parts of the Niger Delta, it added that “our support for development in the Niger delta is more than a business strategy. It is a demonstration of our commitment to the well – being of our hosts.  But it cannot prosper in an atmosphere of rancor, violence and endless acrimony. SPDC continues to collaborate with Local community leaders, traditional rulers and state Governments in the Niger Delta to implement several initiatives and partnerships to raise awareness on the negative impact of crude oil theft and illegal oil refining.”

However, Watts insists: “There are a number of things, but I think they are sacred. If you have pipelines that are 50 years old and have not been repaired, that is the company’s responsibility. The government should be able to compel, through its laws and supervisory agencies, that the oil infrastructure should be repaired or replaced. That has got nothing to do with the community. That is the responsibility of the companies. They must. That is something to me that should and must be done and that will make the safety issue from corrosion for example much improved. The second thing is on compensation. It is clear that the compensation system has to change and how you calculate it shows underestimation on what the communities should be receiving. That shows that the process being carried out is faulty and to me something should be done with the communities participating.”

The professor Emeritus, who spoke to THISDAY after the tour of the areas and meetings with the communities, stated: “It is obvious that the communities are not involved. They are not. There is a new GMoU system called the Cluster Group and that system was actually abandoned. What was in place before was the role of the Community Liaison officers. Now, there is no channel between the community and the oil Companies. So, there is participation by certain people or a select group of people.”

At a sitting in Twon Brass in Brass Local Council Area, the Amanyanabo of Twon Brass and First Military Administrator of the old Rivers State, King Alfred Diette -Spiff reeled out tales of woes, just as they expressed disappointment with the oil companies in their communities.

The traditional ruler explained that it took several letters and pressure on the company before an oil multinational, Agip, came to assess an oil spill in the area few years ago.

“The area affected by that spill was 3,172 square meters. But it took Agip more than nine months to award the clean-up contract despite several calls and letters to the company. In fact, Agip is the Lord of the Manor here. Whatever it decides stands.

It will surprise you that for a clean-up for 3,126 square meters that affected Opkoma and Fantua communities, Agip awarded a contract of N1,100,000. What manner of clean -up was that?

In Southern Ijaw, the Development Committee leader Anthony Demotiein said: “our parents trained us with money they got from farming and fishing. But today, all that is gone. Our crops are no longer growing and we are now battling to train our children.”

Ayawei Egbaboyefa of Koluama clan said: “Koluama is one of the worse hit with explosion and oil spill that were internationally recognized. On January 17, 1980, under a company called Texaco Overseas Nigeria Limited, Koluama community recorded an oil spill. But most notably was that of January 2012 when a massive gas explosion occurred, the fire lasted for 49 days and until now nothing has been done to alleviate the plight of those affected by it.”

On the GMoUs proper, the oil-bearing communities described it as fraudulent during the stakeholders’ forum which had in attendance the members of the BSOEC. The Ibedawoei of Ekeptiama Kingdom, King Bubaraye Dakolo in his presentation said: “The GMoUs are fallacies. The oil firms deceive the communities with these documents and still will not clean up the environment or even provide social amenities. The GMoU has never worked.”

He was corroborated by another representative Olubenson Silas who said: “We were not allowed to note our problems because they claim to know more than us. After the discussion, nothing has been done by SPDC and our people are suffering”.

The Archbishop of York and Chairman of the International Committee BSOEC, John Setanmu said: “In fact, for me and the Commissioners, we are more determined to address the issues. In fact, we are not dealing with the question of oil spillage, that’s true, gas flaring that’s true, air pollution, that is true. But actually, what we are dealing with are the Bayelsa people who have been treated in such a bad way. I don’t know, I don’t have the words to describe. We know what is obtained in the United Kingdom, the United States and other countries and we are not going to rest until the injustices are addressed.’

“The state is facing environmental terrorism that could lead to genocide. It would be unfair for anybody to describe the magnitude of violence done to the environment through spillages and pollution by the oil firms as degradation. When you talk about environmental degradation, it sounds as if it is acceptable. In other words, it is bad but not really too bad, whereas genocide is a tough word; that you are actually killing.

“I went into the river for about four to six hours without seeing a single bird flying anywhere? You would have expected to see them because they should be plenty; but the habitat has been destroyed. What is going on is that bio-diversity is not what it should be, so we need words that actually express the truth. I said in my sermon there that corruption has become a very weak word because it doesn’t tell you who is corrupt or who is corrupting who; I would rather use the words ‘organised theft’ and ‘organised bribery’. That what is causing the trouble.”

While lamenting that the environment had been destroyed because of unchecked pollution, which culminated in the destruction of the people’s livelihood, Setanmu also disclosed to THISDAY that he embarked on a trip for about six hours along the waterways without seeing any bird flying because of the violence done to the environment.

“The environment had been destroyed because of unchecked pollution, leading to the destruction of the peoples’ source of livelihood and eventual death. The problem is when you talk about environmental degradation it sounds as if it’s acceptable. In other words, it’s bad but not really too bad whereas genocide is a tough word, you are actually killing,” Setanmu added. 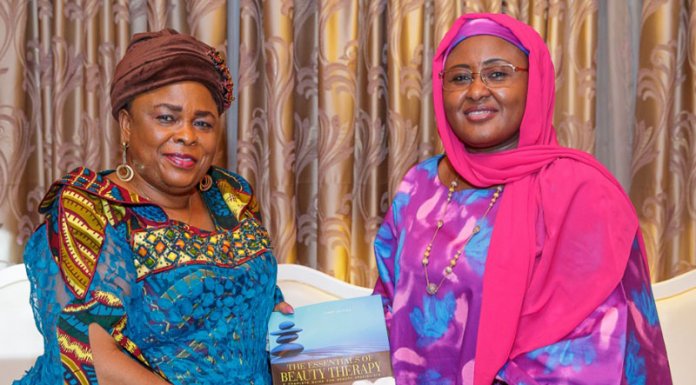 Mistake of Counsel and Judiciary as a Whipping Boy