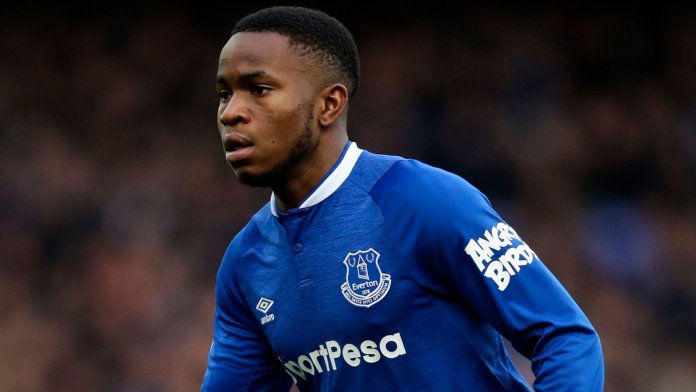 In the summer of 2016, Ahmed Musa set a new transfer record when he moved from Leicester City to CSKA Moscow in a deal worth £16.6 million. That record is set to be shattered by Everton prodigy, Ademola Lookman, as he set to dump the Toffees for RB Leipzig in a move worth up to £22.5m

German Bundesliga club, RB Leipzig are set to break Nigerian transfer record for a winger as Everton agree to sell Ademola Lookman for a fee said to be worth up to £22.5m.

Before now, the costliest transfer involving a Nigerian winger is Ahmed Musa’s switch to Leicester City in the summer of 2016, with CSKA Moscow pocketing £16.6 million from the deal, meaning Lookman’s return to RB Leipzig is set to surpass that fee.

The 21-year-old already played for RB Leipzig in the second half of the 2017-18 season and was directly involved in nine goals-five goals and four assists from 11 appearances in the German top-flight under the stewardship of now-Southampton manager Ralph Hasenhuttl.

Since then, RB Leipzig have held an interest in Lookman. And after an underwhelming campaign where Marco Silva used him sparingly,  he is now set for a permanent exit.

He saw his first-team opportunities limited upon his return to Everton last season, making only three Premier League starts and played 18 games off the bench.

If Lookman’s transfer to RB Leipzig goes through, he is expected to feature in the group stage of the UEFA Champions League for the first time in his career in the new season.

Things have not worked out as well as he might have hoped since making the January 2017 move from Charlton Athletic to Everton. Lookman has only managed 48 outings – with four goals and two assists – and has mainly been a bench player.

But the England U-21 international is set to continue his career in Germany. He thrived in the Bundesliga previously and will hope to follow the likes of Jadon Sancho and Reiss Nelson, who both enjoyed success in the German top-flight.

Analysts are of the opinion that Everton may live to rue Lookman’s exit, blaming Silva for not giving him enough opportunities in the first-team, saying that if he had been allowed to fulfill his potential, the Toffees could save millions in the transfer market as they would not need a new winger.

But this was perhaps a blind spot by Silva. Instead of playing Lookman regularly, he preferred other options, such as Theo Walcott. This is why a permanent exit makes sense at this stage of the 21-year-old’s career.

In 2017, Pep Guardiola was dented with his biggest loss in his coaching career by Everton, a victory that was orchestrated by the Nigerian-born England U-21 and his performance enjoyed a lot of media attention.

Lookman came on in stoppage time of Everton’s 4-0 win over Manchester City to score the fourth goal after capitalising on a mistake from John Stones despite being on the pitch for just a matter of minutes.

The £7.5m signing from Charlton was delighted with his performance and he said afterward: “The gaffer just said ‘play behind Rom. I was lucky to anticipate the ball and put it in the back of the net. My first premier league goal, this is my chance to score it – and I took it well.”

With his goal-scoring debut for Everton, the then19-year-old Lookman dreamt playing beyond the Toffees.

“One day I want to win trophies. Of course, I want to play at the highest level – whether in England or Spain, I want to be at the top. You have teams like Barcelona and Real Madrid. As a kid, I dreamed of playing for one of those teams,” he said.

When Everton poached Leicester’s head of recruitment Steve Walsh in the summer, it was easy to understand the logic. The 52-year-old’s reputation had hit new heights after he unearthed Jamie Vardy, Riyad Mahrez and N’Golo Kante to inspire Leicester’s title triumph, and Everton were eager to apply the same expertise at Goodison Park.

The Walsh was quick to identify the talent in Lookman as the Nigerian arrived from Charlton as a little-known teenager with no Premier League experience. But at £10m, he was the most expensive ever signing from League One.

The fee reflects just how highly he is regarded by Everton. A rapid rise into Charlton’s first-team convinced Walsh that the speedy, skillful little forward could be the next breakout star from the lower leagues, and Ronald Koeman has already described him as an important part of his long-term vision for the club.

Like many of Walsh’s best signings, Lookman has had an unconventional route to the top. The jump from League One to Premier League has drawn parallels with Dele Alli’s move to Tottenham, but while Alli was on MK Dons’ books from the age of 11, Lookman did not set foot in a professional academy until he was 16.

Charlton U-21 coach and former Wimbledon striker, Jason Euell remembered how Lookman came to the club’s attention. “It was right at the end of the U-16 year in 2014,” he tells Sky Sports. “The majority of scholarship decisions had already been made, but every year our U-16s play a game against Inner London, an FA side for the best players in South London.”

Charlton had received a tip-off about Lookman. The youngster was playing what Euell describes as “innocent Sunday football” for an amateur team called Waterloo FC in the London borough of Lambeth, but he produced a dazzling performance for the county side in front of Charlton’s watching coaching staff.

“He had no academy background at all,” says Euell. “Sometimes it can happen that a player slips through the net, but we were lucky to already have a relationship with the county and with Waterloo FC. We signed him on a scholarship straight away.”

Lookman was drafted into Charlton’s U-18 side during his first season at the club, scoring 17 goals in 29 appearances as they clinched both regional and national titles. It wasn’t long before Premier League clubs started to take note, but Charlton are experts in youth coaching and understood the need to be cautious with his development.

“We knew the talent he had but sometimes it’s about taking your time with someone like him,” says Euell. “He had been training once or twice a week but he had to get used to every day, professional football while doing his school work. He had growing to do and he had to start a full-time weight programme , so we had to be careful with how we used him.”

Lookman was eventually promoted to Euell’s U-21s, and in November 2015 he made his senior debut in a 1-0 defeat to MK Dons. Charlton’s season would end in relegation to League One, but a little over a year on from playing Sunday league football, Lookman took the step up in his stride, scoring five goals in 24 appearances and landing the 2015/16 Championship Apprentice of the Year award.

Lookman’s breakthrough was recognised with his first England U-19 call-up last May. His outstanding attributes are his pace, dribbling and powerful finishing ability with both feet, but without any professional coaching, before he joined Charlton, there were areas of his game which required extra attention. “There were a lot of things he missed out on, and that was the learning and understanding of the game,” says Euell. “Young lads always say they can play football, but then comes the tactical side of it, the game understanding and the decision-making process.

“We didn’t want to stop Ademola from doing what he does because that’s what makes him special, it was just about getting him to understand when and where to do certain things. At every level, every game is different. He had to learn what was needed from him in and out of possession.”

Charlton rejected an offer from Crystal Palace in the summer, but Lookman never lost focus and added seven goals in 25 appearances for Charlton in the first half of this season. Euell chuckles as he recalls having to drag him off the training pitch at Charlton’s Sparrow’s Lane headquarters. That determination to improve should serve him well at Everton.

“He’s a great character and everyone else at the training ground would say exactly the same thing,” says Euell. “He is just a humble boy who loves his football. He hates being injured and he always wants to do extra work. He just wants the ball at his feet and wants to improve. He’s one of those guys who absolutely hate losing.”

Charlton manager Karl Robinson only coached Lookman for a few weeks having taken over at The Valley in November, but he described the teenager as an “incredible talent” and a “joy to work with” when the deal was confirmed. Lookman has made a positive impression on just about everyone who has known him, and he heads to Everton hoping for more of the same.

“He called me up to say goodbye,” says Euell. “I said: ‘Goodbye? It’s only a see you later; you’re only going up north!’ We had a nice chat. I gave him a bit of advice and wished him well.” Lookman is still learning, but he has the talent and he has the temperament too. In his new Merseyside surroundings, he might just become Walsh’s latest success story.

Born as Ademola Olajade Lookman on October 20, 1997, in Wandsworth, London to Nigerian parents, he attended St. Thomas the Apostle College in Peckham where he achieved three As and five As at GCSE.