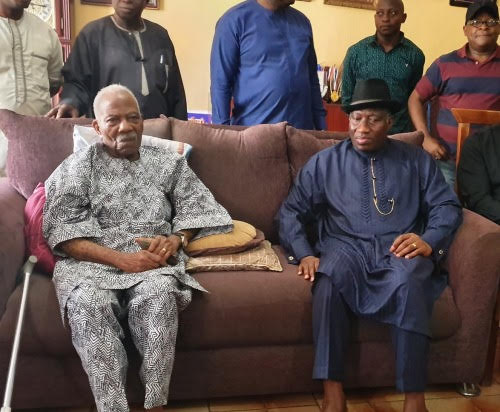 Former President Goodluck Ebele Jonathan has said that the security situation in the country is getting worse.
He therefore said the Federal Government must work with state governments and  adopt a different approach to fight kidnapping and terrorism.
Jonathan made the recommendation Tuesday while speaking with journalists in Akure, Ondo State, during his condolence visit to the Leader of the Pan Yoruba Socio Political Group, Afenifere, Chief Reuben Fasoranti, on the death of his daughter, Mrs Funke Olakunrin.
Mrs Olakunrin , 58, was shot dead last Friday at Kajola on Ore-Sagamu Road while returning to Lagos from Akure, Ondo State.
The former president said the President Muhammadu Buhari administration must design a new method to address insecurity in the country.
He said: “I was there as a president for some time, security challenges were there with me, I also inherited some. But it is getting worse everyday. And we cannot continue to use the same old method.”As security operatives, the police, the SSS, the armed forces we must deploy technology and I believe if the federal government will need to set up a special unit, just like we set up EFCC and ICPC to handle specific issues of corruption.
” If this is done, they will know that their total responsibility is to manage this issue of kidnapping and terrorist attacks on people going on the road or going to the farm.

“We can’t continue that way, it is not just possible, because we can’t talk about managing the economy of this country if people are not safe.  Economy is for the people, they must be alive to enjoy infrastructure. Even if you tar all the roads in the country and people cannot move around, then the road become meaningless.

“The issue of security must be approached from a different dimension, we cannot continue the old way because it is getting out of hand”.

Jonathan, who said just like every generation faces problems and finds ways of solving the problems, every government faces some unique problems which must be solved in a unique manner.
Jonathan said a lot of things were discussed during the 2014 national conference organised during his tenure and recommendations were   made including on security.
“The issue of security, state and community policing were discussed. I always believe that government should look at that report, it was not written by me.
“We should not play politics with serious national issue. If we look at that report, there are  recommendations that bother on security and if there is area that need to be expanded because I believe everyday new ideas come, it should be updated.
“There is nothing wrong holding a specific meeting to look at the issue of security. I believe the federal and state government (should) device a new approach, deploy technology and deploy more money to protect our people”, Jonathan said.