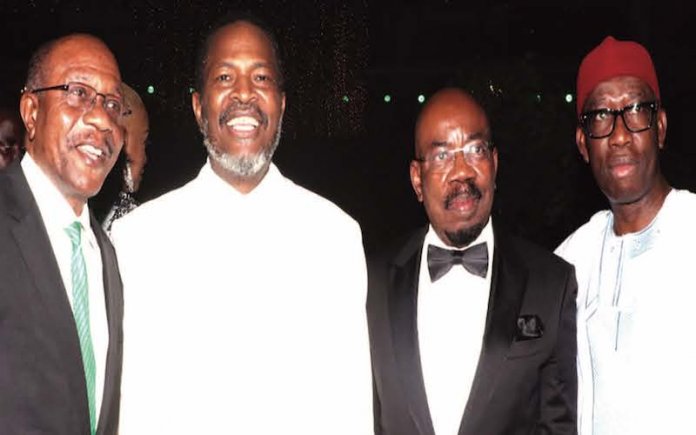 It was a night of glamour. Of tributes. Of music. Of gaiety and camaraderie.
There was much to eat and to drink. The ambience was cool and the guest list impressive.
That was the atmosphere yesterday at the Eko Hotel and Suites, Lagos, where Chairman/Editor-in-Chief THISDAY Media Group/Arise TV Networks, Nduka Obaigbena, a prince of Owa Kingdom in Delta State, drew political bigwigs, technocrats, captains of industry, the intelligentsia and others to join him in celebrating his 60th birthday.

Yesterday’s event, tagged ‘60 Years of God’s Grace’, was the grand finale of the two-day celebration, which began on Sunday with a thanksgiving service at The Cathedral Church of Christ, Marina, Lagos.
But it was not only a night of hedonistic display, it also featured a conversation on the state of the nation and the future of Nigeria.

An entire section of the hotel was transformed into nature’s own fortress with tonnes of green grasses, which signifies life.
The symbolism behind the green grasses was not lost on many of the guests who were witnesses to the behind-the-scene battles of the celebrant, who was hospitalised for three months recently.

Asides the greenery, the dangling chandeliers, alongside the revolving disco lights gave the entire ballroom a cozy ambience.
Drapped in their finest, the guests were first hosted to a cocktail in another area that was decorated with plenty of foliage and a water fountain, thus adding to the aesthetic beauty.
At the dinner, drinks flowed, there were tasty dishes with scintillating dessert as the audience were regaled with a documentary on the life of the celebrant.

As the guests wined and dined, popular American R&B singer and songwriter, Toni Braxton, was introduced to a visibly excited crowd.
Song by song, the songbird serenaded the guests and at a point she asked an audience member to join her on the stage.
Although the guest, who simply gave her name as Nkechi could not sing the lyrics of the song, that did not deter her from swaying to the admiration of all.
For her almost one hour on the stage, Braxton sang, danced, walked into the crowd and engaged the audience in a sing-along section.

Ushered in by four male dancers, the sultry singer set the tone for the night with her 2009 single ‘Please’. She took the audience on a memory lane when she sang ‘He Wasn’t Man Enough’ and for ‘Another Love Song’.
In the middle of her ‘Breathe Again’ performance, award-winning Braxton left the stage and walked to the VIP section where the celebrant was in the company with dignitaries who had graced his 60th birthday celebration.

She had earlier greeted and congratulated him on his birthday celebration. This time around, she sang to him and his friends, eliciting screams of excitement from the audience.
Thrilling the audience with her evergreen melodies, she initially took a bow with ‘Unbreak My Heart’ but was later called back on stage for one last performance.
Braxton’s visit to Nigeria for Obaigbena’s birthday celebration is another testament of his super taste and panache. Not one known to do things in half measures, he threw all in the ring for a splendid celebration.

As the evening progressed, Braxton finished her set at about 9.53pm, giving way to a pre-recorded testimonial of the celebrant by friends, well wishers and family.
Kenim Obaigbena in her speech lauded her father for being a mentor that they can look up to, who keeps pushing them to be the best in their endeavours.
Afterwards, two of his daughters mounted the podium to lavish encomiums on the man they call father, but the world refers to as The Duke.

Reading intermittently from their speech, they said: “He makes things happen. He often tells us failure is inevitable but if you fail, always stand up. He has played an incredible role in Nigeria and in all of our lives.
“Daddy, you have been our protector and provided for us. We won’t be what we are today without you. We wish you many more years.”
After their tribute, it was time to make a toast to many more years of grace. The toast gave way for the cutting of the cake.

Supported by the Governors Emeka Ihedioha (Imo), Abdulrahman Abdulrazaq (Kwara) and Ifeanyi Okowa (Delta State) as well as Central Bank of Nigeria (CBN) Governor, Mr. Godwin Emefiele, Obaigbena cut his birthday cake.
Zenith Bank Founder, Mr. Jim Ovia, anchored the cutting of the birthday cake and afterwards wished the celebrant an additional 60 years.
Another highlight of the occasion was the encomiums poured on the celebrant by family, friends and acquaintances.

Earlier, there was a conversation on the state of the nation during which former Nigerian Ambassador to the United States, Professor George Obiozor, called for the renegotiation of the basis of Nigeria’s unity and co-existence among its people must be renegotiated.

He said: “When I hear people say that Nigeria’s unity cannot be negotiated, I laugh. It can be negotiated from time to time. So we should not resist the inevitable. It’s a historical fallacy to say that the Nigerian unity cannot be renegotiated. That is why I believe the 2014 National Conference was a good thing for Nigeria.
“The problem of Nigeria is the political leadership. As long as our leaders keep playing the ostrich and keep dodging to solve the real problem, every generation of Nigerians will keep facing the same problem. What Nigeria needs urgently is a political system of shared powers.”

In his contribution, former Northern Region Premier, Alhaji Ahmadu Bello’s grandson, Alhaji Hassan Danbaba, said the solution to Nigeria’s problems was dialogue.
“In my own perspective, it is an issue that needs to bring people together to sit down and discuss. The issues are so many. The best thing is to sit down, look at what the problem is and find solutions. We need to come together. Initially I used to think that the leadership needs to do more, but the common man also needs to do more. The leadership can’t do it alone,” he added.
In his submission, immediate past Minister of Power, Works and Housing, Mr. Babatunde Fashola, said the country should recruit its best brains into the public service.

“What is the silver bullet for Nigeria? On deep reflection and with the benefit of public service, there is one thing I think we need to pay attention to: it is the professionals in Nigeria, the quality of those that choose to come into the public service.
“We need to bring in our very best. The very best of our human capital have left the public sector for the private sector.”
Fashola also wondered how many Nigerians who attended Ivy League schools are now in the police, federal ministries or teaching in public schools.

“That is for me the singular recommendation I will make. We must decide to populate the Nigerian civil service with the very best of our human capital. We must not underestimate the capacity and power of a well resourced, well trained, very competitively recruited civil service as the real drivers of development,” he said.
On her part, Managing Director of the Nigerian Ports Authority (NPA), Hadiza Bala Usman, agreed with Fashola that the public service should be peopled by the nation’s best.

“Every time I see young people try to come into the public sector, I encourage them. I also believe we need to have reform minded people in the political space,” she added.
According to her, the country needs to work on its consumer credit and national identity systems, adding that doing so would “help us develop our middle class. I think we should start walking the talk. It’s time to start implementing this. Lets stop excuses and get Nigeria working.”

Then, it was the turn of the Obaigbena to address his guests. In his speech interspersed with witty jokes and anecdotes, he said his life was as a result of God’s grace.
Recalling how his proposed plans to host family and friends last December failed because of ill health, he said after being hospitalised for three months, it was obvious God still has a role for him to play.

He said: “It’s a privilege to host you today. In December last year, I proposed a thank-you evening with quite a few of my friends but on the eve of that day, I fell gravely ill.
“But today, I want to thank God. I was in the hospital for three months and I was out of action but God has a role for me to play.”

While mentioning some of his high-end friends in his appreciation speech, he waxed philosophical when he charged the audience to “think about Nigeria, think about inequality and how we can make Nigeria better.”
It was indeed an emotional night for the celebrant who was showered with accolades by friends, colleagues and family members. Some of the dignitaries who graced the occasion were Ogun State Governor, Prince Dapo Abiodun; his Edo State counterpart, Mr. Godwin Obaseki.

Others include key players in the nation’s economy such as Chairman of Metis Capital Partners, Mr. Hakeem Bello-Osagie; former Guaranty Trust Bank Managing Director, Mr. Fola Adeola and former Managing Director of UBA, Mr. Tony Elumelu.
Bringing the night to a near-close, afro-pop superstar, Tiwa Savage, thrilled the audience with some of her hit songs before Wizkid came on stage to entertain the crowd with a medley of songs.