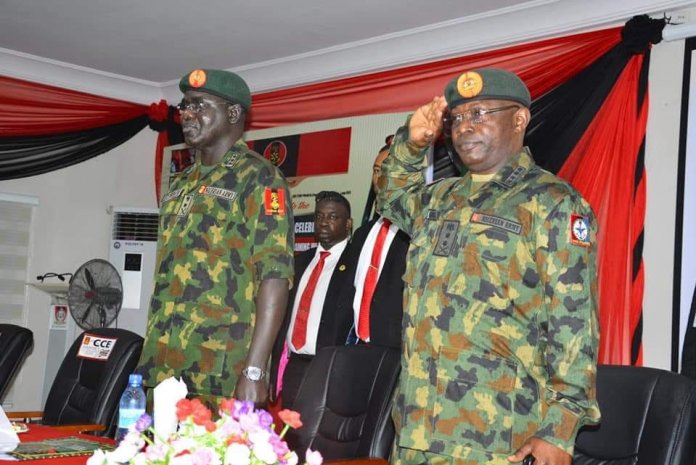 At the recently held Nigerian Army Day celebration and Combat Support Arms Training in Lagos, Sunday Ehigiator reports that the focus was on grooming professionally-responsive soldiers  for any successful military operation

At the headquarters of the Nigerian Army Ordinance Depot in Lagos, professionally-responsive soldiering was touted as the panacea for any successful military operation. The occasion was held at the opening ceremony of the combined Nigerian Army Day Celebration (NADCEL) and Combat Support Arms Training (COSAT) week.

Themed ‘Professionally Responsive Soldiering, panacea for successful military operations’, the Chief of Defence Staff, General Abayomi Olonisakin and the Chief of Army Staff, Lt. Gen. Tukur Buratai, at the week admonished soldiers to be more responsive in their service to the nation at their various duty posts, just as they stressed on some strides of the military in curbing insecurity in the country.

In his address, Olonisakin assured Nigerians that the military is better positioned to totally end the insurgency in the North east, and other criminal activities across the nation. According to him, “Our discuss comes at a time when the Armed Forces of Nigeria is re-organising to better tackle current challenges, and curb all future threats in line with our role as enshrined in the constitution of the federal republic of Nigeria.

“Our contemporary security challenges are characterised by more stage actors, who exhibits deep intolerance for peaceful coexisting with other members of the public based on narrow ideologies, radicalism, and in some instances, outright criminal intent. These individuals and groups have resulted to attacking innocent citizens, creating an atmosphere of fear and panic through act of terror, as well as insurgent activities against Nigerian territorial integrity.

“ It is therefore vital that the Nigerian Army continues to lead efforts in crushing such elements, so that they nation may be safe and secured. To consolidate all the successes against the insurgents, these building efforts must continually concentrate on addressing the drivers of the challenges in the force space.

“I wish to assure you that we are better position to totally end the insurgency in the North east, and other criminal activities across the nation. This can only be achieved through synergy and cooperation of all the services, security agencies as well as other stake holders. The right to live in a peaceful and secure environment is an interminable right of every citizen of this country. Thus, there is an urgent need for all Nigerian citizen, in the spirit of patriotism to contribute to the efforts of combating the menace of insecurity in the society.

@Our efforts at combating insecurity in our dear nation is a continuous engagement that requires a lot of sacrifice, and to which we are ultimately committed. The Nigerian army, and indeed the armed forces of Nigeria is encouraged in this ou noble course b y the support and encouragement of Mr. President, Commander in Chief of the Armed Forces of the Federal Republic of Nigeria,President Mohammadu Buhari. I therefore wish to seize this opportunity to express our appreciation to Mr. President for all the support and encouragements for operations, including the welfare needs of the armed forces in both internal and foreign operations.”

Also speaking, Buratai revealed that the Nigerian Army is currently celebrating its 156th year of existence since its establishment as the Glover’s Hausa’s in 1863. According to him, “The choice of July 6 as Nigerian Army day is due to the historical fact that the first shot during the Nigerian civil war was fired on that day at Garkem back in 1967. The 30 months civil war was fought to keep Nigeria one with a lot of soldiers paying the supreme price in the process.

“Thus, NADCEL is a constant reminder of the sacrifice made by troops most of whom laid down their lives to ensure we remained united as a nation.  Though times have changed and the challenges have morphed, yet the resolve of Nigerian army troops and its conquering spirit has waxed stronger and more triumphant. This is what we are celebrating today.

“This year’s NADCEL is being conducted at a time when our soldiers are still fighting various evils bedeviling the nation on various fronts. A good number of our colleagues have over the years made the ultimate sacrifice in the process of keeping Nigerians safe.

“Many Nigerians have lost a sibling, relative or friend as our troops battled the enemy at the gate of our beloved nation. We honour these heroes and hold them in high esteem. They are the reason why we are alive and marching on to victory with teary eyes but with courageous hearts.

“I am pleased to state that the Nigerian Army has made giant strides in curbing various security threats since the dawn of the current administration. We have not only consolidated on the gains established in the fight against insurgency in the north east, but have progressed to the stabilisation phase where all efforts are geared towards ensuring displaced persons return to their traditional homes. This year’s NADCEL is unique as you will see the varied sides of the Nigerian Army,

“Since my appointment as the 20th Chief of Army Staff  on July 15, I have pursued a transformational vision which is to have a professionally responsive Nigerian army in the discharge of its constitutional roles. This is based on my core conviction of not only military subordination to civil authorities but also the fact that increased military professionalism ultimately yields greater effectiveness in military operations. It is in the spirit of my vision that this year’s NADCEL theme is aptly crafted as ‘Professionally Responsive Soldiering: A Panacea for Successful Military Operations’.

“We will continue to do everything possible in our resolve to build a formidable army supported by a well trained and equipped combat support arms.  I sincerely commend the efforts of the combat support arms in the ongoing counter insurgency operation in the North East where the artillery has effectively acquired, located and engaged ground targets while the air defence continue to prevent hostile aerial interference with our land operations.  The engineers have equally assisted the army to live, move and fight especially in the areas of Counter Improvised Explosive Device (CIED) and force protection. Additionally, the Signals Corps has provided communications and electronic warfare support for effective command and control during our operations while the NAIC has assisted in producing actionable intelligence for ongoing operations around the country.

“The security challenges we are facing today however manifesting in novel and ambiguous forms thus requiring more agility, flexibility, ingenuity and an uncanny ability to think outside the box; hence, the theme of the COSAT Week, which is ‘Enhancing the Efficiency of the Combat Support Arms in Tackling Contemporary Security Challenges’. I therefore look forward to incisive lectures, engaging discussions and pragmatic solutions to the myriad security challenges we face today.

“While we have made good progress as an army; producing undisputable results in various theater of operations, I must say that there is still room for improvement. I see the combat support arms, being a conglomeration of intelligent, resourceful and technologically savvy officers and men, as key drivers in the attainment of my vision.

“The fast-changing nature of the modern battlefield and the availability of technological resources to adversarial forces call for both critical and creative thinking to multiply force and do much with the little available. In this regard, we must continue to strive to be self-reliant in battle space technological options and reduce importation of military hardware in the long term.”