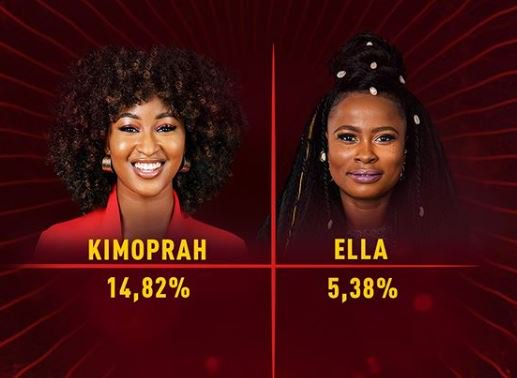 By Vanessa Obioha
It was a surprising end to housemates Ella and Kimoprah’s stay in the Big Brother Naija’s House as they were evicted on tonight’s show. They were the most nominated housemates alongside Sir Dee, Tacha and Mercy whom Frodd used his Veto Power on.
Sir Dee was the first to survive the chopping block before host Ebuka Obi-Uchendu asked Ella to leave the house.
Initially, it was expected that only one housemate would be evicting the house but the enigmatic Big Brother informed the host that another housemate will be packing their bags home.
Visibly nervous, the remaining nominated housemates went through another tense moment with Ebuka who has an uncanny way of building suspense. At the mention of her name, Mercy was very excited that her stay in the house was not yet over. She received hugs and cheers from her fellow housemates, including Kimoprah who was yet to know her fate.
At the end of the night, it was the end of the road for Kimoprah. Her eviction affected some of the housemates, particularly Gedoni who seemed to be fighting back tears.
Putting up a bold front, Kimoprah said she would place a bet on Mike and Jeff to emerge the winner of this season. She also revealed that Ella was the only housemate she didn’t get along with.
Ella and Kimoprah are the second group of housemates to leave the show. Last week saw Isilomo and Avala evicted after a game of chance.
There were some exciting revelations during the live show. Ebuka put some of the housemates in the hot seat, starting with a clip of Frodd breaking down when Esther turned down his offer to date her. Without mincing words, he asked Esther if she wasn’t touched anyway by Frodd’s years. Esther replied that she didn’t know how to react that was why she kept a straight face. Then Jackye found herself in a tight corner when Ebuka asked her to reveal which of the housemates she suspected was fetish. After much circumventing, she disclosed that she suspected Tacha of using a talisman because of the anklets. Tacha quickly defended herself that it is just an ordinary adornment.
While Ike is yet to make up his mind on who he has true feelings for , Khafi was confident to confirm that her heart has been arrested by Gedoni. Diane on the other hand placed Sir Dee on the brother zone. The duo are very close and there are guesses that they may get closer in the house.
With Ella and Kimoprah’s eviction tonight, only 17 housemates are left in the battle for the coveted N60 million grand prize. Sponsored by Bet9ja, the season four of the reality show is themed ‘Pepper Dem’ and so far, is leaving up to its theme with the colourful and spicy housemates who have been entertaining the continent in the past 14 days. This week will witness another drama and of course, possible housemates for eviction on next Sunday live eviction show.