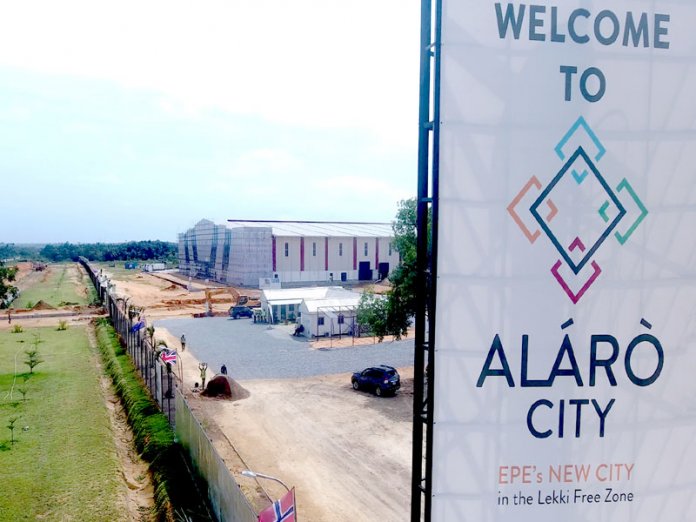 Investors and prospective homeowners have continued to express strong interest in Alaro City, a new mixed-income city being built at the Lekki Free Zone (LFZ).

The new city, located in the North West Quadrant of the LFZ ,has been acclaimed as the next phase of Lagos.

The project, more than twice the size of Victoria Island, is a joint venture between the Lagos State Government and Africa’s largest new city builder, Rendeavour.

A statement by Tim Beighton, Head of Communications, Rendeavour, said the phase one of its residential plots had already been sold out while the phase two sales were ongoing.

The statement said “Businesses are also taking advantage of the mixed-use characteristics of the new city going by the several facilities under construction at the site. More than ten businesses, spanning across national and multinational firms, are currently investing in the city.”

Odunayo Ojo, CEO of Alaro City, said the new city lies in the growth path of Lagos and aims to serve as a model for what a modern mixed-use city looks like.

“We expected high uptake of the plots, but the rate at which they sold out has been exceptional,” he said.

“Alaro City is situated in a prime location in the Lekki Free Zone, making it one of the most exciting development projects to come to Lagos State. The location and exclusive benefits have undoubtedly been key selling points for buyers,” Ojo noted.

He said the pedigree of the city’s developers. Rendeavour, seen as the biggest new city builder in Africa, was also another key attraction.

“As a master developer, Rendeavour invests over $250 million in each project, creating the infrastructure and living and working spaces that will help sustain and accelerate Africa’s economic growth, meet the aspirations of Africa’s burgeoning middle classes, and serve as a catalyst for further urban development,” said Stephen Jennings, the founder and CEO of Rendeavour.

Real estate and tax experts say the city is also attracting investors as a result of the fact that it is in a tax-free zone within an axis that has become one of the highest appreciating real estate areas in the country.

“Alaro City offers a unique and valued investment proposition that the market clearly recognises. As with any real estate investment, the real trick is to key in early,” Olaniyan added.

Businesses in the LFZ are exempt from all federal, state and local government taxes, levies and rates while operating in the zone. Some of these taxes include: Value Added Tax (VAT), Withholding Tax (WHT), Company Income Tax and Custom/Import Duties. This has also been identified as a magnet for investors in Alaro City.

“These investors are attracted by, among other things, the tax breaks available with operating in a free trade zone,” said Bidemi Olumide, Partner and CEO of Taxaide, a tax management firm. “For your company to be operating in that territory, you have a significant rebate in taxes; and that’s a conservative way of putting it. You have zero to no income taxes; you have no transactions taxes; etc. Then on the regulatory side, you are not dealing with multiple regulators; you are dealing with one regulator, which is the Nigeria Export Processing Zones Authority (NEPZA), who then organises all the relevant regulators under one umbrella so that you have only one port of call for all regulatory matters which significantly reduces your compliant costs.”

The residential plot appetite can also be tied to this as home builders will benefit from the advantages of building in a free zone; benefits which include and cheaper construction costs resulting from tax and duty incentives.

The LFZ, spanning across 16,500 hectares and widely acclaimed as the most ambitious project in Lagos State, has received remarkable attention this year; partly due to the several milestones celebrated by major investors in the zone in the past few months.

One of the biggest investors in the zone is Dangote Group, which is building a petroleum refinery, a fertilizer processing plant, a gas pipeline project and a petro-chemical plant in the South East Quadrant of the zone.