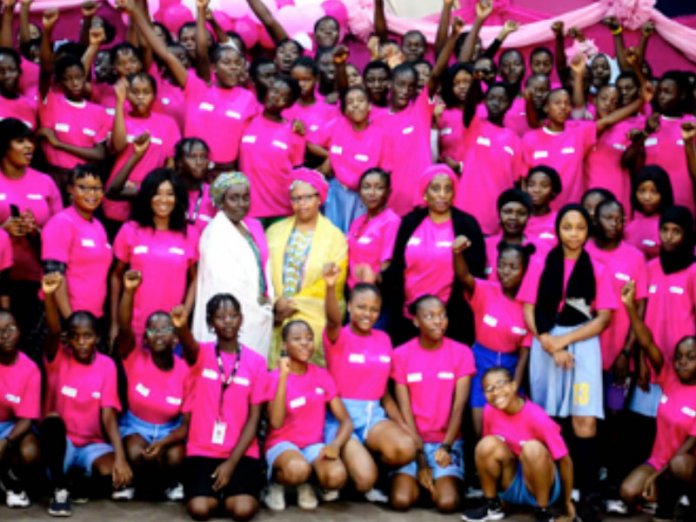 Africare Nigeria, a Nongovernmental Organisation has sensitised secondary school girls across 10 schools in Federal Capital Territory (FCT), Abuja on menstrual health and hygiene through its Power Forward project.
This is coming as stakeholders made a shocking revelation that some women in Nigeria, at over 30 years still lack the basic knowledge about menstruation.

The awareness programme, which held at the Raberto High School with at least 150 girls across the schools participating, is in commemoration of the 2019 World Menstrual Hygiene Day celebration with the theme: ‘Menstruation Matters to Everyone Everywhere’ and slogan ‘It’s time to Take Action’.

The Head of the FCTA Public Health Unit, Ms. Fatima Daggash, speaking at the programme stressed the need for girls to maintain a clean hygiene during Menstrual period to avoid infection.

Daggash said it’s important that girls at puberty age gets the right information on menstruation, according to her, most women don’t know the right things regarding menstruation.

“But when we all have the wrong information and our parents have refused to talk to us about the right thing, they go about not knowing what to do when it happens to them.

She however, advised against the use of cloths to replace sanitarary towels saying they are not hygienic. She also noted that for economic reasons those who can’t afford sanitaries still use cloths.

To this end, she urged the Federal Government, and NGOs to help see that sanitaries reach young girls either free or at an affordable rate. She also urged the local production of sanitaries to reduce cost.

Further, Daggash regretted that menstruation still hs a negative perception as it’s still considered a taboo or something to be ashamed of coupled with the myths around it.

“People need to understand that menstruation is a normal thing it happens to every girl and it’s God design to prepare girls for motherhood, so it’s something we should not be ashamed of”, she said.

She also informed that some girls depending on their body system can start menstruating as early as nine years of age. This she said should not be seen as something wrong or witchcraft in some parts of Nigeria stressing that it’s normal.

She however encouraged young girls to talk to their parents, caregivers, or nurses whenever they notice irregularities in their menstruation.

The Senior Head Coach on the Power Forward Project, Ms. Maureen Stanley, said the essence of the activity is to bridge the information gap on issues around menstruation in the society.

Stanley said, the menstrual hygiene day celebration is one of the six community initiative observed in the Power Forward Project.

“The project is a youth development programme that aims at developing the capacity if youths through four components and one of them is public health and this is one if the major activity, we do under the public health component”, she said.

She added, “We are doing this because we have noticed that there a lot of confusion and lots of wrong information associated with menstruation because of lack of education.

“We believe that bringing this education to them will help them reach a wider society, because every knowledge they gain today they will step down.”