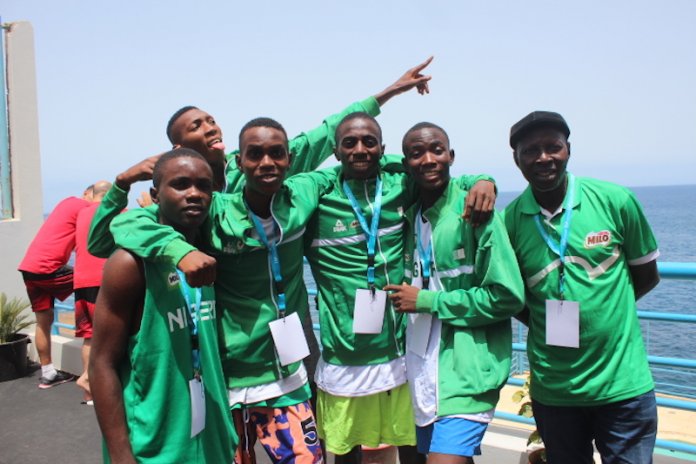 Nigeria players to the ongoing FIBA U-16 Africa Championship in Cape Verde have rated their experiences as awesome and life changing after four days on the coastal West African island.

The Nigerian team aiming for a first two finish at the championship which will automatically qualify them for the U-17 FIBA World Cup in Sofia Bulgaria in 2020 had their first free day on Monday since arriving in Praia, the capital city of Cape Verde on Friday.

The boys, sponsored to the competition on the stables of Nestlé Milo recorded their first win against the hosts on Sunday at the Vava Duarte stadium in front of a packed gymnasium cheering the home side.

Taking a look at the first four days of their stay in the country, the boys say there have been more positives than negatives as they intend to enjoy more of the scenery also getting more wins on the scoreboard.

Small forward, Precious Ikpe said. “They are loving and friendly people it is also a developing country, and I discover that their population is not as much as Nigeria. They are all beautiful and they look like Brazilians and this country is a good tourist place because of their beautiful ocean. Some of the things I don’t like since coming is their food, it is way different from what we eat in Nigeria, they don’t eat pepper at all.”

Power forward James Okemirie stated that the first thing he noticed was the way the houses looked. “I like the way their houses look, the beach which is very blue and I like their closeness to the ocean, the hills and the roads here are beautiful and they are very organized.”

Esuola David, Centre said “Their houses here are not as clustered like we have in Nigeria and there is no traffic here which is different from Lagos where I live and there is constant power. What I dislike is that their food does not have pepper.”

Ebuka Okpara, the team’s point guard noted that the serene environment brings a lot of positivity.” they have a very cool and healthy environment, there is no traffic, no noise, every thing is just in the right places.”

None of the players have ever been out of the country before now, the boys have since found it a bit difficult to adapt to the cuisine and most times favour it when rice or pasta is served.

The top four teams in each groups will qualify for the next stage of the competition while the bottom teams will play the ninth and tenth position classification match.