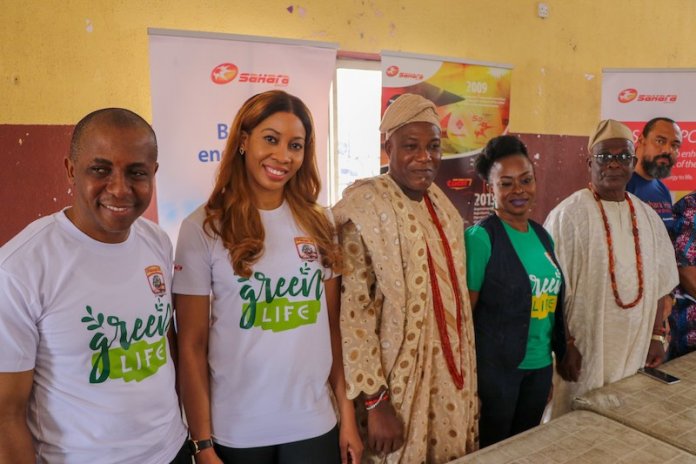 To solve Lagos’ waste challenge, Sahara Foundation has engaged key leaders, religious authorities and government representatives in each community, sensitising them on the urgent importance of proper waste disposal. They are in turn expected to spread the education to the rest of their communities, writes Solomon Elusoji

On a recent damp Thursday morning, elite residents of Ijora-Oloye, a slum community around west Africa’s busiest port in Lagos, converged on their town hall to talk about waste management. The community, with its network of weather-beaten roads and low, ramshackle houses was riddled with filth. Residents said the Lagos Waste Management Authority (LAWMA) and its retinue of trucks do not come into the community to collect waste, so they resorted to piling up rubbish in gutters, verandas and a nearby underbridge. This is a fairly common problem in Lagos; in 2017, a hiccup in the state’s waste management operations resulted into thousands of Lagosians dumping their waste on the streets, blocking major roads and polluting the air with repulsive smells.

The convener of the Ijora-Oloye meeting was Sahara Foundation, the CSR arm of Sahara Group, an energy conglomerate with business interest across 38 countries. The foundation said it is invested in, among other things, the environment and sustainable development, and wants to turn the community into a recycling hub. “We have an office here (Ijora-Oloye),” Director for Governance and Sustainability at Sahara Group, Pearl Uzokwe, said, “and we’ve looked around and realised there is a waste management problem”.

Sahara’s plan to clean up the community by engaging the key influencers – community leaders, religious authorities, government representatives – in the community, sensitising them on the urgent importance of proper waste disposal. Sahara Foundation’s Manager, Oluseyi Ojurongbe described it as “a mindset orientation”.

The influencers are then expected to spread the education to the rest of the community. “We have town criers who can go round and inform others”, a Baale of the community, Tajuden Igbalaye, who attended the Thursday meeting, said. What Sahara is doing “is a very good program, we want them to do more”.

Apart from sensitising, Sahara is also partnering two environment companies, EcoPrune and Pearl Recycling, to train the community on how to collect, sort and package waste products for delivery, which can then be exchanged for healthcare services. But they are starting with one person in the community, who is set to become a certified upcycler. “The person is supposed to cascade the training down to other members of the community”, Ojurongbe said. “It’s like a pyramid”.

Climate Change is transforming the world. The United Nations has described it as “the defining issue of our time”. The oceans are warming and ice packs in Antartica are melting, but the quantity of greenhouse gases in the environment, due to intensive industrialisation and deforestation, continues to rise. The future of planet earth is at stake.

The problem, however, is that the rise of greenhouse gases is inextricably tied to better lives for more people across the world. No government wants to stop building houses or making cars to save the earth. But by reducing and reusing components of production, experts believe the significant increase in global warming can be arrested.

Lagos, perhaps west Africa’s most cosmopolitan city, generates about 13,000 metric tonnes of waste daily. But most of it is not properly disposed, talk less of recycled. When it rains, people dump their refuse in flowing gutters, inadvertently blocking drainages, leading to massive flooding. Sometimes, most parts of the state resembles an abandoned landfill.

To tackle the problem, droves of environmental startups have been founded offering innovative approaches, but government intervention remains key. The city’s immediate past administration introduced the ambitious Cleaner Lagos Initiative (CLI) to provide an all-encompassing solution, but the program failed to get traction.

Meanwhile, corporate organisations like Sahara are also weighing in. This June, the group launched its Green Life project, a social responsibility initiative that seeks to contribute to solving problems related to climate change, including Lagos’s perennial waste problem.

Committed for the Long Run

At the Thursday meeting, Ecoprune’s Co-founder, Sandra Onwuekwe, delivered a presentation before the community representatives. She linked the locals’ arbitrary disposal of waste to flooding and ill-health. She also displayed a variety of recyclable waste products, such as plastics and cartons, then reminded them about the healthcare services they could receive. Later, founder of Pearl Recycling, Olamide Ayeni-Babajide, gave a similar speech, too.

It is not yet clear how successful the healthcare incentive will be but a similar scheme in Ajegunle by Africa Cleanup Initiative, which allowed people to exchange plastics for educational services, has been deemed successful.

Ojurongbe said one way the foundation will track progress is by measuring the number of trips being made to the community’s healthcare centre and determining how much flooding has been curbed in the area.

After the Thursday meeting ended, members of the Sahara Group and its environmental partners rolled up their sleeves and picked up rakes to clean up parts of the Ijora-Oloye community.

“This is not going to be a one-off, it is going to be continuous,” the Sahara sustainability chief, Uzokwe, said. “We look at it as something that can be built on. It is just the beginning. So we are looking for partners and collaborators. We believe we can’t do it alone, but we will not stand on the sidelines.”