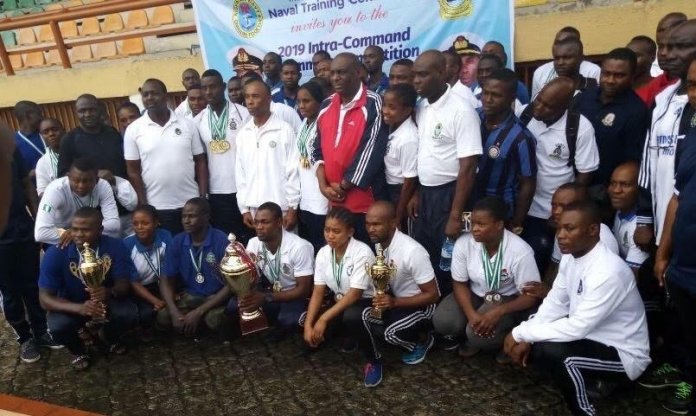 Sunday Ehigiator
The Nigerian Naval Training Command (NAVTRAC), at the weekend organised a swimming competition in Lagos to test the capabilities of its personnel on water.
The competition which began earlier last week was held at the olympic-size swimming pool inside Teslim Balogun Stadium (TBS) in Surulere, Lagos.
According to the Flag Officer Commanding (FOC) NAVTRAC, Rear Admiral Stanfford Enoch, the exercise was done annually to test the capabilities  of naval operatives to not just float on water but also swim.
He said swimming expertise was one of the requirements to be a naval personnel, adding that NAVTRAC ensures regular trainings of personnel in all experts of the job.
He said: “As naval personnel, our operational existence requires that we should be able to not only float in case of emergency but also know how to swim.
“Swimming is a prerequisite. This competition brings together personnel from other units of the command once a year so that we can examine their fitness and ability to survive during emergencies.
“At NAVTRAC, we train personnel from the point of entry into the navy to the last level of training they require within the country. So, ensuring that they are good swimmers is also part of our mandate.
“So, the command is making sure that all personnel who are enlisted or recruited in the navy must be able to pass a certain standard of swimming test in the school.
“It is a mandate and we have given directive that all those passing out must pass the minimum level of training.
“Ofcourse, not long ago, there was a directive and we at NAVTRAC have conducted swimming proficiency examination for all personnel in Lagos area. Centralised certificate will be issued to them based on set standard for swimming and ability to float.”
Congratulating the winners of the competition, the FOC noted that the exercise aimed at also showcasing the talents in the command, adding that “sporting events as this are meant to showcase the collective talents in NAVTRAC not only recognising winners in the competition. Sport helps you to build physical stamina and teaches us to take victories and defeats in our strides.
“Those who did not win should not be disappointed but should analyse their performances and strive to do better next time”.