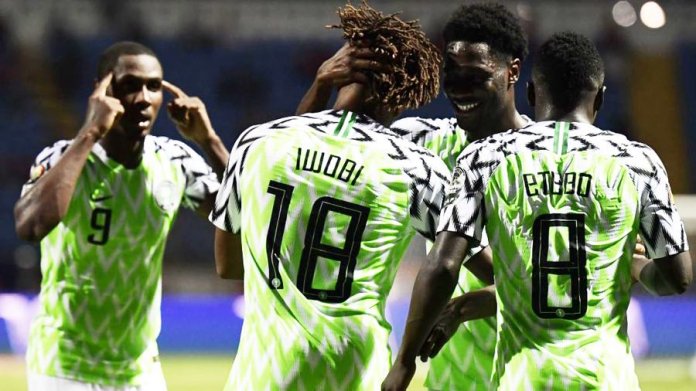 Nigeria’s Super Eagles brushed off the disappointment of a humiliating defeat against Madagascar in their last match to rise to the occasion and eliminate defending champions, the Indomitable Lions of Cameroon, from the ongoing Africa Cup of Nations in Egypt.

The Nigerian team again faced adversity after going 2-1 down at halftime but thereafter came from behind to edge out their illustrious opponents 3-2 at the Alexandria stadium.

In a match which will be remembered as one of the best the in the tournament so far, it was the Eagles who started on the front foot and opened the scoring in the 20th minute when Odion Ighalo stabbed in a goal after a Nigerian set piece.

The Eagles were the more proactive and threatening team early on had the chance to extend their lead but the Lions gradually eased into the match and started posing problems of their own.

Cameroon pushed back with Clinton N’Jie and Christian Bassogog coming more into the game, but the wide men initially had little joy against Nigeria’s fullbacks Ola Aina and Chidozie Awaziem.

However after a sustained spell of pressure, the Indomitable Lions hit back to level the game in the 41stminute. Bassogog whipped in a cross from the left and Stephane Bahoken, with almost his first contribution of any note, outfoxed Kenneth Omeruo and expertly turned the ball home for 1-1.

The Eagles were then stunned with another goal three minutes later when Bahoken flicked on a long ball and N’Jie showed good speed and strength to hold off a challenge from Aina before striking a low shot past Daniel Akpeyi to send Cameroon into the interval with a 2-1 lead.

N’Jie almost forced a third goal early in the second half, with his low cross from the right of the penalty area deflecting off Aina and heading toward goal, but Akpeyi did well to quickly change direction and claw the ball away.

However, the Nigerian side showed more urgency with Odion Ighalo dropping back to link with the rest of the team, while Alex Iwobi moved closer to Ighalo.

The Eagles soon equalised just past the hour mark, with Ighalo again getting on the score sheet. This time Awaziem provided a fine cross from the right and Ahmed Musa cleverly chested the ball into space for the striker, who turned and fired home a left-footed shot for 2-2.

Ighalo soon went from scorer to creator, playing a lovely pass through the legs of Michael Ngaedu-Ngadjui to find the run of Alex Iwobi, who hit a low shot past goalkeeper Andre Onana to make it 3-2 to the Super Eagles in the 66th minute.

Ighalo had a great chance to complete a hat-trick in the 76th minute when a low cross from substitute Samuel Chukwueze found the striker unmarked in the penalty area, but his shot was palmed away by Onana to keep Cameroon in the contest.

However, there was no way back for the 2017 champions, allowing Nigeria through to a quarterfinal against South Africa in Cairo on Wednesday night.