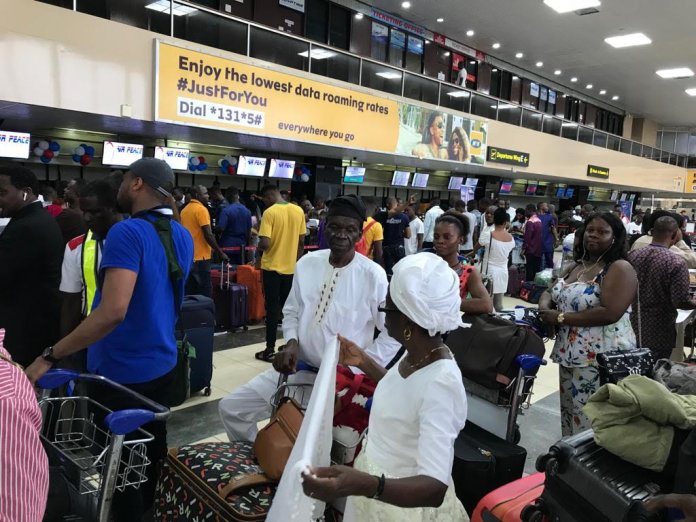 Hundreds of Nigerians paid for tickets to be part of Air Peace inaugural flight to Dubai via Sharja in United Arab Emirates (UAE) from Lagos on Friday.

The passengers said that they wanted to identify with the indigenous carrier, because of its affordable fares and the desire to see a Nigerian airline operate international destination to stem the exploitative fares charged by international carriers.

They expressed the hope that if Air Peace continues to provide efficient service, they would continue to patronise the airline, which they described as source of pride to the country.

One of the passengers, Ezekiel Lawal, told THISDAY that he was excited to be traveling to Dubai with a Nigerian carrier and expressed the hope that the  airline would sustain the route, adding that the fare is attractive and affordable.

“We are happy that a Nigerian airline is taking us to Dubai. The fair is very good and with this many people will be patronising the airline. Look at hundreds of people that are traveling with the airline. Many of them are traveling for the first time because they can afford the fare,” Lawal said.

At the formal ceremony to herald the inaugural flight at the Murtala Muhammed International Airport  (MMIA), Lagos, The Chairman/CEO of  Air Peace, Allen Onyema, said that the airline’s foray into international operations would help end the short changing of Nigerians flying to international destinations.

Onyema said he empathised with Nigerian travellers because of the outrageous fares they were made to pay when compared to what other African countries pay for the same hours of flight.

He stated that Nigerians traveling from Lagos to London which is six hours pay more than travellers flying from Johannesburg to London, which is about nine hours.

The airline which commenced its inaugural operations with over 80 per cent load factor said it aims to maintain its startup trajectory.

Onyema said the airline’s major objective is to provide efficient and reliable flight service to Nigerians at affordable fares to stem the exploitation of Nigerian travellers.

“Let me tell Nigerians, what you pay to Europe for a  six hours flight , those that fly  nine hours from Jo’ burg do not pay that; it’s time to stop the short-changing,” he said.

The Air Peace boss also said that competitor airlines would soon begin to crash their fares when they hear of and see the attractive offer Air Peace has in store but reminded them that these airlines refused to drop those fares initially until they came in.

” As we speak our fares are attractive, we have N180,000 to Dubai via Sharjah on Economy, and we have N650,000 for Business Class while our First Class is N850,000 you won’t get a better offer, in fact for First class ok you see from N2million up. I’m sure some airlines will reduce their fares but this is just to ensnare you again and keep ripping you off.”

“I am sure that Air Peace will start and not close shop after some months, I have no doubt this will succeed,” he said.

The Permanent Secretary represented by the Director Air Traffic Management, Azssan Musa,  also hinted that government has helped with its special window for making foreign exchange available as well as aircraft spare.