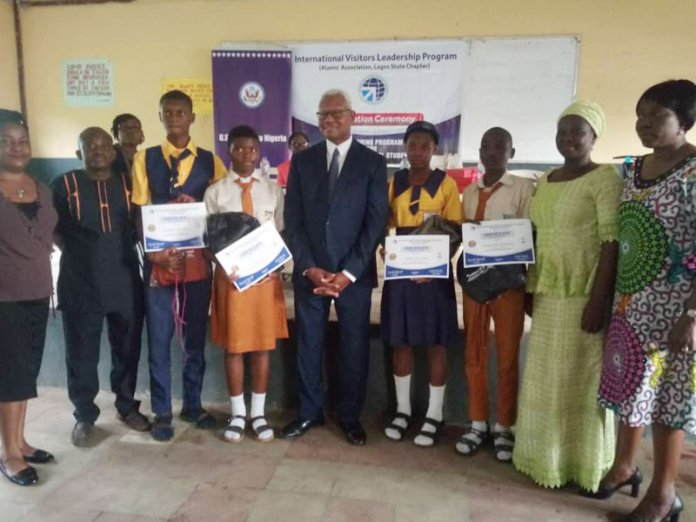 To whom much is given, much is expected. This saying rings true for the International Visitors Leadership Program (IVLP) Alumni Association. For them, the need to nurture budding youths on acquiring leadership skills is one of the ways they are giving back to the society.

The association came about due to the recognition they received from the US Consulate, as leaders in various their communities in Nigeria. They cut across all works of life, discipline and were randomly selected by the consulate for the giant strides they have achieved in their various fields. To be an alumni, the mentors undergo a three weeks experience program in about six states in United States where they interface with individuals in their own fields and learn leadership roles and skills that they will implement on their arrival back to Nigeria in various projects.

Recently, it was the second graduation ceremony at the Oregun High School, Ojota, Lagos. The program began on March 11, 2019 with classes held for one hour in the four selected schools and lasted six weeks with the students coached on Leadership Skills Training, Education USA, Science, Technology, Engineering, and Mathematics (STEM). Series of Evaluation were also carried out.

The Leadership Mentoring program was designed by the IVLP Alumni Association to develop academic, personal and social competencies in high school students to prepare and equip them for leadership roles in the society. The mentors also retrained themselves further following directives from their manuals before setting out to coach the secondary school students who were tutored on various subjects on how to deal with peer and societal pressure, choose their friends, identify their areas of influence and choose their respective careers devoid of external influence and held interactive sessions with their mentors on educational opportunities opened to them in the United States.

It also gave voice to the girl-child, teaching them not relent but continue to forge ahead irrespective of gender or background even when the odds are against them. Mrs Abisoye Ajayi-Akinfolarin an alumni of the association, who is a CNN Hero Award runner up and a Girls’ Advocate plus Founder of Pearls Africa Youth Foundation, a non-governmental organisation aimed at educating young girls with technology skills, during an interactive session with Ajigbeda Girls High School shared her life experience to motivate the students to strive to do better as hard work surely pays and not to succumb to peer pressure.

The participating students were also encouraged to use all what they have learnt during the training to improve their way of living and also use the knowledge they garnered to educate their peers more on the opportunities opened to them, with Ajigbeda High School already a notch ahead as the participants have already set up Peer Counselling Sessions on Tuesdays in their school, where they teach and interact with their peers mostly SS1 and 2 students sharing their knowledge, further more boosting the programs’ initiative of touching the lives of students in Public Secondary Schools.

The graduating students were given certificates of participation by Mr. Russell Brooks, the Public Affairs Officer of the United States of America Consulate, Lagos.
The program which in its second edition saw 240 graduands pooled from the selected schools, as each school had 60 participants. The increase in the number of students participating in this years’ program shows how strong the program is striving as against 130 participants the program had last year with just two schools.

The project has mentored an estimated 370 students in six schools across the six educational districts in Lagos with 26 mentors involved with this year’s project. Awards were presented to them for the work they put into the program, working closely with school counsellors, teachers and vice principal academic coaching this peer mentoring groups founded by the graduates to guide them.

Students were full of accolades for the program’s organisers and praised the mentors for all their input with Miss Ifeoluwa Martins, an SS1 pupil of Ajigbeda High School, speaking on how the interactive sessions helped her stop being timid and turned her into a courageous, smart and outspoken teenager who is no longer afraid of the crowd but speaks up to make sure her voice is heard.

Miss Olajumoke Balogun of the same secondary school and class said the program helped her tremendously to stop being “claustrophobic”. She has stopped being an introvert and actively interacts with her peers and seniors alike without fear.

The convener and alumni of the association, Mrs Omowale Ogunrinde rendered her heartfelt gratitude to the US Consulate for being a major sponsor, her fellow mentors who took time out of tight schedules every week to impact knowledge, touch lives, help develop the students socially, academically, psychologically in all aspects of life.

She thanked them for taking the pupils as their own without prejudice. Ogunrinde was grateful to Mr Russell Brooks for having an interactive session with students where he urged them not to relent in their endeavours and pursuits of a bright future.

He extoled the importance of education as the gate way to an industrious and fulfilling life and as the world is moving fast, the students should also gear up and work hard. He was full of praises for the mentors of the IVLP as they have given back to the communities all what they learnt during their own training in the United States and left no stone unturned when impacting knowledge during their mentoring program.

Brooks encouraged the students from the respective public secondary schools to use what they learnt during the Leadership Mentoring Sessions to improve and develop Nigeria in their own little way to increase development and prosperity in the country.

He urged them to take education very seriously and prepare themselves for the world in which they will live in, which is a globalised world, where they will have to compete with those from other countries in the fields of business and education as the world is more interconnected than ever before.