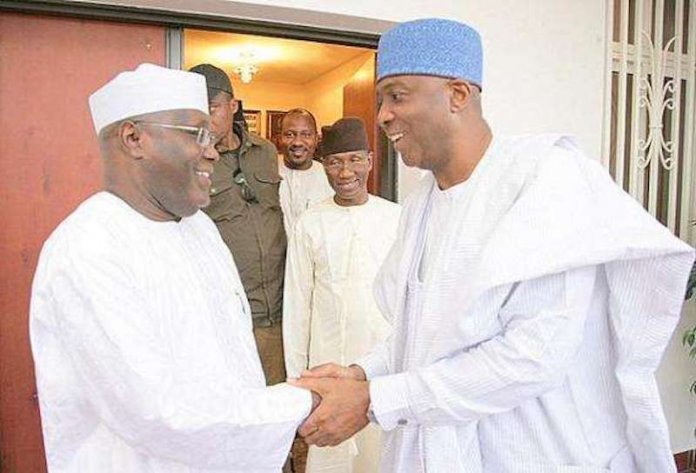 The presidential candidate of the Peoples Democratic Party (PDP) in the 2019 elections, Alhaji Atiku Abubakar, has advised immediate past President of the Senate, Dr. Bukola Saraki, to stay strong and remain firm following moves by the Economic and Financial Crimes Commission (EFCC) to arraign him on allegations of corruption.

Atiku in a statement made available to journalists in Abuja yesterday, accused the federal government of plotting the downfall of Saraki.

Describing Saraki as one of the most investigated Nigerians, he asked him to take solace in the fact that the nation’s constitution is there at all times in the interest of all.

Atiku said: “I urge Dr. Bukola Saraki to stand firm and take solace in the fact that Nigerians still hold the constitution higher than any other authority.

“Dr. Abubakar Bukola Saraki, the immediate past Senate president, is one of the most investigated politicians in Nigeria.

‘’He has been investigated and prosecuted all the way to the Supreme Court and has prevailed against his accusers. It was expected that should have been the end of the matter.’’

Atiku said that the revival of previously investigated cases, and the fact that Saraki was politically opposed to the administration of President Muhammadu Buhari seems to give strong grounds for objective bystanders to conclude that his current travails have gone beyond prosecution and are now tending towards persecution.

“I stand against corruption in government, which was why my office personally facilitated the take-off of the Economic and Financial Crimes Commission (EFCC), with a loan, after that most important anti-corruption institution was founded by then President Olusegun Obasanjo,” he said, adding: “However, there is a huge difference between prosecution and persecution. I am all for prosecuting the corrupt, but I believe it is wrong to use the instruments of state to persecute political opponents.”

Atiku said the laws of the Federal Republic of Nigeria are made for all and stated: “We fought for democracy so that the powers of the state would not be used to support tyranny and oppression.’’

He called on Nigerians especially those tasked with upholding the constitution and the laws of the land, to note that silence in the face of oppression is akin to acquiescence.