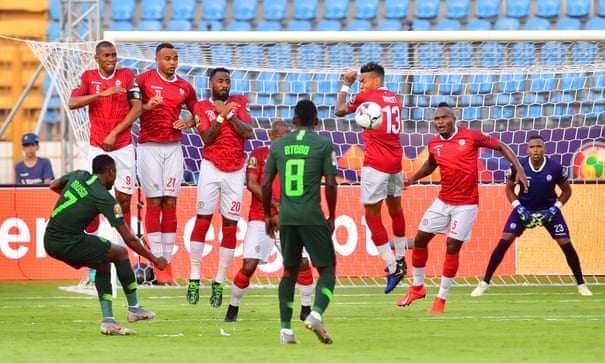 Madagascar produced the biggest shock so far at the on going 2019 Africa Cup of Nations in Egypt as they beat three-time winners Nigeria 2-0 to reach Last 16 with seven points from three matches.

Shocked Eagles finished the group stage on six points and are now the runners up going into the second round. The possibilities of playing Ghana’s Black Stars in the Last 16 is very real.

The Indian Ocean islanders have been the surprise package on their AFCON debut, claiming four points from their first two games in Egypt.

And Lalaina Nomenjanahary stunned Nigeria by pouncing on a defensive error to claim an early opener.

Carolus Andrea’s deflected free-kick then ensured Madagascar went into the last 16 as winners of Group B.

Madagascar are ranked 108th in the world – 63 places below Nigeria, who go through as runners-up having won their first two group games.

Super Eagles dominated possession but were punished when trying to play out from the back. John Ogu under-hit a square ball to Leon Balogun on the edge of their own box and the Brighton defender hesitated, allowing Nomenjanahary to nip in and round goalkeeper Ikechukwu Ezenwa before slipping the ball into an empty net.

Nigeria replied with Samuel Kalu curling a shot wide but Madagascar continued to make the better chances as Andrea produced a tame volley after exchanging passes with Jerome Mombris, before captain Faneva Andriatsima lashed a shot wide after being slipped in by Andrea.

Madagascar doubled their lead as Andrea’s 25-yard free-kick deflected in off Leicester midfielder Wilfred Ndidi, who had come on at half-time for Nigeria.

Ndidi produced his side’s first shot on target on 57 minutes but not even the introduction of Arsenal forward Alex Iwobi could spark a Nigeria fight back.

Nicolas Dupuis’ wards were the first team to qualify for the AFCON 2019, and have gained tremendous confidence on their debut with the draw with Guinea and victory over Burundi

Madagascar is to join three other group winners to play against third-place finishers in the Round of 16.