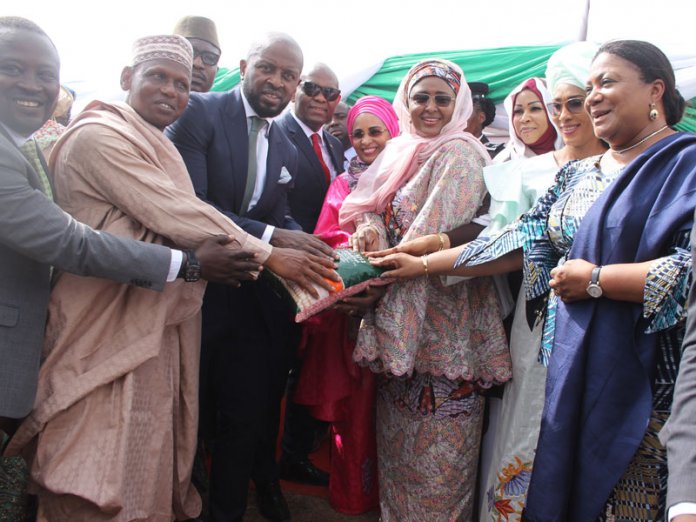 Chiemelie Ezeobi writes that Notore Chemical Industries, Nigeria’s leading agro-allied company and fertilizer manufacturer, through its Green Schools Initiative is changing the narrative by rallying stakeholders in the agricultural and educational sectors to expand the secondary school curriculum to get students acquainted with the nitty-gritty of agriculture at an early age

After Nigeria caught the crude oil bug over six decades ago, one of the segments of the economy that received the hardest hit was the agricultural sector.

Agriculture had hitherto laid the foundation for Nigeria’s industrialisation, contributing the largest share to an economy that was experiencing very boisterous growth. Commercial farms blossomed and farming was seen and practiced as proper business.

However, after decades of abandoning agriculture, dwindling hydrocarbon revenue and the need to rearticulate the economy has made going back to the farm a priority for governments and many other private actors looking to drive sustainable development.

The resort to rejig agriculture is cast against the backdrop of the sector’s immense potential to absorb a large workforce. In fact, even with low productivity, agriculture still accounts for two-thirds of Nigeria’s working population, according to the Food and Agriculture Organisation (FAO).

Unfortunately, there still exists the belief that farming is a profession for the poor and illiterate, which entails grueling toil in the farmland with a pittance as returns. These notions have been fuelled over the years by lack of proper training for those who go into agriculture, causing them to demonise and abandon the venture, leading to an ageing farming population that is dying away gradually.

This narrative is being changed by Notore Chemical Industries, Nigeria’s leading agro-allied company and fertiliser manufacturer, through its Green Schools Initiative. The initiative, a novel national programme, rallies stakeholders in the agricultural and educational sectors to expand the secondary school curriculum with the intention to get students to practice agriculture in dedicated farmlands in their school premises.

The priority is to get young Nigerians acquainted with the nitty-gritty of agriculture at an early age, introduce them to the business and money-spinning aspect of the practice and at the same time, make schools self-sustaining in food production.

Keen on setting the right mood for the programme’s national roll-out, Notore launched the Green Schools Initiative at Aliyu Musdafa College, in Yola, Adamawa State, on June 11, at a ceremony graced by Nigeria’s First Lady, Hajiya Aisha Muhammadu Buhari, as well as her counterparts from Niger, Chad, Ghana and The Gambia.

Managing Director/Chief Executive Officer (CEO), Notore Power & Infrastructure, Femi Solebo, said the Green Schools Initiative was timely because it was coming at a period when Nigeria’s population was growing faster than there are farmers to feed the nation.

Noting that agriculture still remains the largest sector of the Nigerian economy and employs two-thirds of the labour force, he said, “Agriculture accounts for approximately 22 per cent of Nigeria’s GDP.

However, in the past, many of the youth have not been interested in going into agriculture as a career due to their previous misconceptions about the sector. However, this is something we are working to change as we highlight the various benefits of agriculture as a business.”

He added that Nigeria’s rapidly ageing active farmer population was due for a baton-change, noting, “When the current farmers retire, Nigeria will face a major crisis in food production because without a strategy a new generation of sustainable farmers will not exist.”

Breaking down the concept of the Green Schools Initiative, he said that the programme aims to ignite the interest of school students in agriculture and encourage them to pursue agriculture-related careers instead of banking and oil & gas sector careers.

According to him, “The Green Schools initiative involves Notore partnering with Secondary Schools across Nigeria to establish demonstration farms that will be used to teach students modern agricultural techniques and best practices. The hands-on approach of demonstration farms accelerates the adoption of these international agricultural best practices, which will give the students a competitive edge over their counterparts in other sectors.”

He said that Notore’s launch of the Green Schools Initiative reflects its commitment to enhancing the quality of life as aptly captured in the company’s mission statement, noting that the initiative is a strong testament to Notore’s quest to be a significant contributor to the development of Africa, and especially Nigeria, as it targets the youth.

Tijjani St. James, Head of Notore’s Commercial Division, said the Green Schools Initiative will start off with 120 Unity Schools and top state-owned colleges across the country, stating that the company aims to significantly increase the number of participating schools and include relevant NGOs and state governments in the quest to lay the foundation for Nigeria’s future agricultural development.

He said, “Notore will see to it that this initiative makes maximum impact and endures for a long time by working with the Federal Ministry of Education to expand the Agricultural Science subject curriculum to include agri-business at the SS3 level.

“As we progress, we will expand the sizes of the demonstration farms so that each school cultivates a minimum of two hectares annually to help minimize Federal Government’s spend on grain purchases to feed the students.”

St. James also revealed that the First Lady of Niger wants Notore to replicate the initiative in her country by including it in the existing MOU that Notore has with Niger.

Nigeria’s First Lady, Hajiya Buhari said she was pleased that the initiative was kicking off at her former school, Aliyu Musdafa College, noting that the programme contributes immensely to President Muhammadu Buhari’s quest to stimulate youth interest in agriculture.

According to her, “I have always expressed my desire to see that women and young people become self-reliant; this is why I welcome the effort of Notore Chemical Industries to introduce a Green Schools Initiative, which is aimed at inculcating the love of agriculture and especially farming among Nigerian youth. With the commissioning of the pilot this afternoon at Aliyu Musdafa College, I hope that it will be replicated in all schools in the country. Our young people need to see agriculture as a business and a way to grow the Nigerian economy. I therefore commend Notore for this initiative.”

She said that it was delightful that Notore’s Green Schools Initiative would ignite the interest of school-age youths in agriculture and encourage them to grow up to take agriculture-related careers.

Noting that there was a need to support such causes, she called on the private sector, non-governmental organisations and extension agencies to invest in agriculture because “The potential is enormous, and the foundation is the youth, as they are the future of the nation. I also call on the youths to embrace agriculture and turn our economy around.”