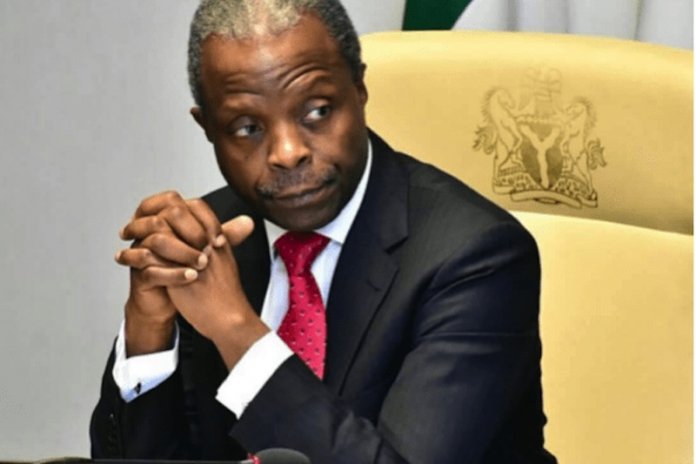 Pan-Yoruba socio-cultural organisation, Afenifere, Ohanaeze Ndigbo, the Southern and Middle Belt Forum (SMBF), and the Christian Association of Nigeria (CAN), have criticised Vice President Yemi Osinbajo over a statement credited to him that the level of insecurity in the country was being exaggerated.

Osinbajo was quoted as saying during a town hall meeting with Nigerians in New York, United States, on Sunday that “some of the kidnapping stories you read or listen to are simply not true anywhere; some are fuelled by politics.”

Afenifere, in a reaction contained in a communique titled: ‘We Can’t Bear It Anymore!’ which was adopted after the organisation’s General Assembly held yesterday at the home of its leader, Chief Rueben Fasoranti, in Akure, Ondo State capital, condemned Vice President Osinbajo for taking such position in far away New York while Nigerians are living daily in palpable fear over insecurity.

The Southern and Middle Belt Leaders Forum (SMBL), in a separate reaction by its spokesman and National Publicity Secretary of Afenifere, Mr. Yinka Odumakin, accused the vice president of being insensitive to the plights of suffering Nigerian masses.

According to SMBLF, “We have not seen such inconsiderate, uncaring and totally sadistic comments from any man trusted with position of responsibility anywhere around the world in recent time.”

Afenifere, in its communique, stated: “The meeting was scandalised by the opportunistic and provocative utterances of Vice-President Yemi Osinbajo in New York on Sunday dismissing the danger we are faced with in Yorubaland as well as by other zones in Nigeria as being ‘politically motivated.’

“As if he is unaware that we are in a digital world, which explains why America and Britain have issued travel directives to their citizens not to travel to more than two-third of Nigeria, the Vice President without much thought for his integrity stated that ‘With respect to general kidnapping, which we have seen in parts of the country, again, this is not entirely new. In fact, some of the kidnapping stories you read or listen to are simply not true anywhere, some are fuelled by politics.’

“The meeting frowned at this unfortunate comment by the Vice President who shames the Yoruba people with his very cheap politicking with the lives of Nigerians.”
Noting that Yorubaland is still under siege, the communique noted that the state of security in Yorubaland was reviewed that they were overwhelmed by reports of traumatisation of the people by Fulani herdsmen/kidnappers/militia all across the six states in the zone as well as Kwara and Kogi states.

“All the reports provided clear indications of failure of state as the security forces have largely incapable or unwilling to safeguard the lives of our people against these criminals as we are not aware of any of them that has been arrested or is under trial at the moment just as all the federal government has done so far is to make excuses for the Boko Haram and Miyetti Allah groups that have been accused of so many crimes against the people of Nigeria.

“Aside from the daily tales of horror across Yorubaland in the hands of these Fulani marauders, meeting would like Osinbajo to answer the following question: Is the report of the kidnap of a district head from President Muhammadu Buhari’s town from May 1 till date politically motivated? And was the President speaking of another country when he handed kidnappers on rampage to God?

“If he cannot answer these questions, he should kneel before his God and ask for forgiveness for violating ‘Thou shall not lie’ commandment. We further admonish him not to allow whatever ambition and political interest he serves to push him to make such infuriating comments as the number two man in the country again.”

On its part, the SMBLF said Osinbajo’s statement in New York was far from the truth, stating that “It is one thing for a leader to be bereft of kind words to the numerous victims of the genocidal acts currently going on in Nigeria, the Next Level of utter depravity in leadership is to tell bare -faced lies on the open abuse of citizens in the hands of Fulani marauders going on in Nigeria.

“How someone can tell such a lie internationally, go to bed comfortably and still wakes up calling himself a Pastor is beyond our ken. It is now clearly in doubt that Nigerians can any longer trust this type of leadership to protect them.”

On his part, the President-General of Ohanaeze Ndigbo, Dr. John Nnia Nwodo, who expressed shock at the statement, told THISDAY that “I can’t believe that Prof. Osinbajo said this. Nigeria is in real trouble!”
The Igbo leader, however, refused to speak further on the issue.

But the Deputy National Publicity Secretary of Ohanaeze Ndigbo, Mr. Chuks Ibegbu said they were shocked to read such remarks, wondering whether the vice president had become so unaware of the developments back home.
“The statement is very unfortunate. That statement doesn’t meet the requirement and standard of his status. Maybe because they are in government and are protected by government security, they no longer appreciate what the ordinary man faces out there.

Also, one of the nation’s foremost human rights activists and Executive Director of the Environmental Rights Action (ERA), Dr. Nnimmo Bassey, also decried the vice president’s statement, saying that “the Vice President missed a great opportunity to assure Nigerians who turned up to hear him that government was doing something about the various manifestation of insecurity in Nigeria.

“He should know that some Nigerians abroad are even more current with facts on the national situation than their compatriots in the country. Some of the persons in the audience may even have relations that may have had the unfortunate situation of being kidnapped.
The same sentiment was expressed by Akin Osuntokun, a former political adviser to former President Olusegun Obasanjo.

To him, “as a media practitioner, you are in a good position to answer that question. Anyone who says the security crisis in Nigeria is being exaggerated should pray for God’s forgiveness and hope that the grisly reality is not brought to his homestead as penance.
On its part, CAN asked the federal government to stop playing politics with the security challenges and wake up from its slumber and fix the problem.

The umbrella body of Christians in the country said that recent unpleasant comments attributed to some top government officials regarding the issue of insecurity in the land seemed to portray them as not being responsive to the worrisome situation.

While reacting to a statement credited to the vice president, the Special Assistant to the CAN President on Media and Communication, Pastor Adebayo Oladeji said most parts of the country have been under “the siege of terrorism, herdsmen killings, banditry, and kidnappings but the government of the day has continued playing the ostrich and blame game instead”.

“We are always in a dilemma to react to some unpleasant remarks being made by some top government functionaries in recent times because few days later, they will recant and turn around to blame the press for quoting them out of context. Here we are when the country has been under the siege of terrorism, herdsmen killings, banditry, and kidnappings but the government of the day has continued playing the ostrich and blame game instead of being responsible for the unprecedented criminal activities in the country,” he said.

“How could the Vice President, in far away country, play politics with the menace of kidnapping which some of the key members of the government like the immediate past Minister of Health was a victim? The popular Abuja-Kaduna highway and some major roads in the country are under the siege of kidnappers while states like Kaduna, Kogi, Ondo, Osun, Oyo and a few others are under unprecedented operations of these wicked beings yet the government is claiming that nothing of such is happening under its watch.

Spokesman for the CAN president said President Buhari should seek for the best hands in his second term to help address the present security crisis as well as other problems bedeviling the country.

“As the Body of Christ, we will not cease speaking truth to power no matter what until the truth prevails. Nigerians deserved the best from the government and this is why we are calling on the Presidency to look for the best hands in its second term who can get us out of this mess. But if religion, tribalism and religious sentiments are still the yardstick for the selection of those who form the next government, it means the struggle continues.

“Let there be a national government where everyone will come on board to collectively liberate the country from these economic and Security challenges. It is well with Nigeria,” he said.