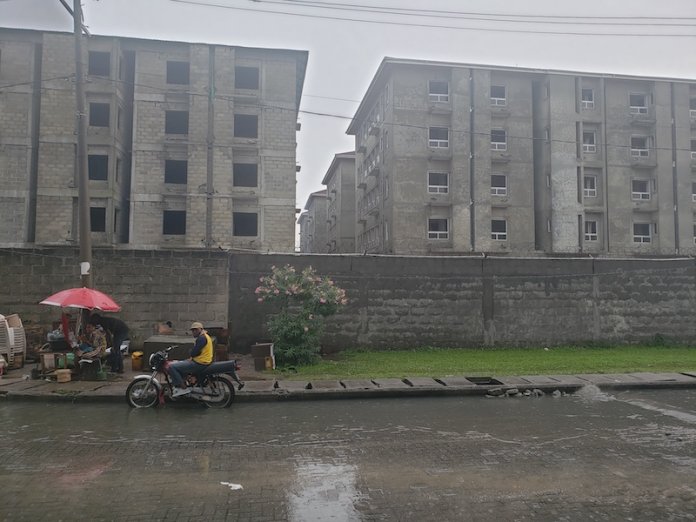 A car park turned into a housing estate in Lekki, Lagos

Some patriots in Lagos say they are committed to the orderly growth and development of the state, but believe their effort is being constrained by governance structures that, over the years, are manned by people with alleged pecuniary interest alone. Bennett Oghifo writes

Some stakeholders in Lagos believe the growth and development of the state is stunted because its masterplan, and future outlook is being inordinately altered for monetary reasons by those who stand to benefit greatly.

Between the Lagos government and some powerful residents, it is difficult to say who wants this distortion more, according to the concerned citizens that discussed the situation with journalists, recently.

Regardless, the government says it is reacting to the whims of residents, particularly of those in communities it planned for structured growth like Magodo, Lekki, Victoria Island, Ikoyi, among others.

These developments are controlled by the New Town Development Agency (NTDA), which the stakeholders accuse of complicity in the distortion of the state’s mansterplan.

The General Manager of NTDA, Mr. Wasiu Akewusola believes otherwise, and in a recent statement about the situation in Magodo alleged that the residents had already turned the area into mixed-use with illegal conversion of residential buildings to schools and offices, and that this compelled the government to review the masterplans to developmental plans.

The review of Magodo Residential Scheme II, he said was done to legalise the illegal conversion of residential buildings to other uses.

But the second vice chairman of Magodo Residents Association (MRA), Mrs. Kemi Omotoso urged the state government to stop the planned commercialisation of the estate and incursion of the wetlands to save the environment, the eco-system, as well as restore the peace in the estate.

Before Magodo, Victoria Island was planned and built as a purely residential enclave with little commercial activity, but now almost 95 per cent of the property there has been converted to commercial use.

Regrettably, Ikoyi, a model of pristine living, is losing its mind, as next generation homeowners of property, who hardly share the concept of their forebears, find the purchase offer irresistible.

Reacting to the situation in Lekki, the Chairman of Lekki Residents’ Association, Chief Kehinde Otitoju agreed that some of their members are responsible for the distortion. “They sell their property and move elsewhere.”

Chief Otitoju showed THISDAY the masterplan of Lekki, saying he was in the area before most of the structures there were built. “I have been living in Lekki Peninsula since 1999 and I have been an active participant in Lekki affair.”

On the conversion of plots for a Police Station and parking lot to other use, he said Lekki Phase I was well-planned with sites and services, including police stations and parking lots. There were designated “Police Post, access roads and parking in Year 2000 Lekki Map with Olubunmi Owa Street yet to be written. Same Area Map in August 2017. But now, as from 2018, the parking, access road and Police Post were fraudulently sold and are being developed by a Chinese construction company as housing estate, thereby creating parking problems for adjoining buildings, including the over 10-storey CBC plaza.” Owners of these buildings had banked on the 1,200 capacity car park and Police Station for parking and immediate security, respectively.

The LRA Chairman said, “I know of two police posts inside Lekki, one inside Mobolaji Johnson/Maruwa Estate and the second one along Daytona Street, off Abayomi Sonuga Street, off Fola Osibo Road. Both police posts are under Maroko Provisional Police Officer (DPO).”

Recently, concern was expressed by a resident of Lekki, Mr. James Anifowose, who said he was gravely disturbed by the distortion of the Lagos masterplan because it affects lives.

He said a city is an economic system that is guided by a masterplan, which he described as a future plan, and that with the distortion of this plan, Lagos had a big social problem, but that there would be huge benefit if the government intervened.

He called for an inquiry into masterplan abuse in Lagos state, saying its distortion is counterproductive, as it erodes the confidence of foreign and local investors. Investors, he said feel cheated when they see unauthorised changes in the masterplan that encouraged them to invest. The masterplan looks good, with schools, play area, among others and they buy the land and build, but that less than 10 years after, the area falls apart, on account of technicalities like ‘change of use’ thrown up by government officials. “There is nothing wrong with change of use, but when there are stakeholders, it must be done with the consent of stakeholders. Two things stand out for me; the irresponsibility of Lagos state government about the masterplan and the loss of integrity.”

He said the state is in big crisis, adding that regardless of whatever it was called, there will be no change in the outcome. “Both people and plan must develop and the way to develop is to look back and ask who is responsible for what; the local government has so much responsibility but they have been silenced.

According to Anifowose, Lekki has a bastardised masterplan, explaining that “Lekki was strictly a residential area with specific Central and Northern Business Districts. These are the commercial areas, but as you can see every other building is being commercialised.

Most of the stretch of Olubunmi Awa Street, on the right, is designated as public parking in the masterplan, he said and that the building specification there is each should be a minimum of 10 floors.

He said the masterplan is sabotaged by the residents/building owners and by the government, wondering who is complaining about its distortion. “The NTDA has lost control of the situation, whatever they say or do is subject to the express fiat of the governor,” describing the governor as the chief planning regulator of the state.

He said there was a huge social problem in Lagos and wondered if Governor Babajide Olusola Sanwo-Olu would be able “to step in and intervene. He should try and intervene.”

Also, he said the state’s traffic problem was in direct correlation with its masterplan, explaining that new roads attract new housing estates and new communities and that these outgrow the size of the road in no time because it was designed for far lesser number of people to use.

He said, “You cannot solve the problem of people changing their houses to commercial centres because you’re not planning for the people; you’re failing at the basic duty. Masterplan is a future plan, it is not a present plan. So, if you plan your future to fail, as Lagos state has done, what kind of success are you expecting?”

He quoted an article titled “The Developing City – Lagos, Nigeria: A Case for a Stronger Master Plan” written by Byron Nicholas and published in “Black + Urban”. He stated that “in 2017, a BBC report, A City That Won’t Stop Growing highlighted the seemingly endless population growth of Lagos, Nigeria. By 2050 Nigeria is projected to have twice the population it has today, more than half will live in cities, and about 60% of them will be under 25. If we do not intervene to solve the issues that overcrowding may cause, Lagos will be the 3rd largest city in the world with the least infrastructure than any other large cities of the world.

“Lagos, Nigeria has the potential to be an economic hub not only for Western Africa and the rest of the continent, but of the world – reaching ranks such as Tokyo, New York, Hong Kong, Paris and London,” but incessant flouting of its master plan is a problem.

Byron Nicholas wrote that “Western cities have one thing that considers them amazing places to live work and play. Each of these cities has developed some sort of ambitious master plan which they follow through. Most cities underwent a physical renovation period to modernize the city for generations to come.

“A master plan is a policy framework, in the form of a comprehensive document that envisions the physical, social and economic capacity of a city well into the future.

“Nowadays, much credit is given to city’s Master Plans for designating land uses and acting as a regulatory document to plan future development. In most developed cities great parks, bars, restaurants, apartments, houses, entertainment centres and government institutions can be contributed to a comprehensive master plan.”

Africa’s developing cities need stronger master plans. “On the contrary, many large cities in developing countries, particularly in Africa, seem to have weak master plans, mostly with western planning ideologies that do not seem to provide a detailed account of how their city should look and grow into the future, in regards to their economies, housing affordability and availability and public infrastructure. For example, there is a stereotype that Africa’s cities are not economic growth hubs, when in fact they are located in some of the fastest growing countries in the world. Their master plans/economic plans should reflect their economic potential to lure investors.

According to Mr. Anifowose, “impunity is a social vice which is being accepted as the cultural norm in Lagos. Irresponsibility and lack of integrity of state governments make it impossible for businesses to plan. Extortion, hooliganism and gangsterism of governance weigh down on the populace”. “When we got to Lekki newly, there were no transformers, no water and no roads. Most of us built our roads ourselves. Twenty years down the line, the strategic master plan we bought into has changed considerably. The problem with the Lagos Master plan is lack of integrity, social responsibility and accountability. Otherwise, how would a government turn children’s playground to shops or car park to residential houses. Anybody can wake up and build a kiosk or begin to fry “akara” in front of his house. Residential houses now have shops built into the available spaces thus leaving no parking spaces for cars. Vehicles are parked outside leaving narrow road for road users. Most people in governance do not understand the dynamics of urban planning. Lagos, a city that is over 160 years old, ought to be protected,” he said.