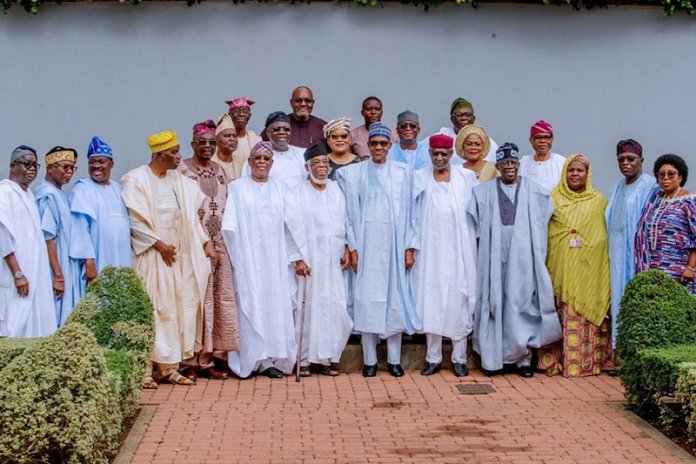 President Muhammadu Buhari on Tuesday in Abuja met with the leadership of the Afenifere, where he explained why the former Chief Justice of Nigeria, Justice Walter Onnoghen, was suspended before his voluntary retirement on May 28.

The president, who spoke extensively on the war against corruption, right from the time he was military head of state, said he reluctantly `dealt’ with Onnoghen following the discovery of huge amount of monies (both in foreign and local currencies) that were traced to him.

He said: “I will tell you as Afenifere, that was why I had to deal though reluctantly with the former Chief Justice, because there were millions of dollars, euros, not to talk of naira, which were not declared.

“I wonder what sort of conscience some of us have, how can you sit and preside and lock people up for years and even sentence some to death and yet you are not doing what the constitution says you should do by occupying that vital institution.

“On fighting corruption, you know it – again I don’t mind repeating myself even though I sound like a broken record, as a military head of state, I took everyone to prison and pronounced them guilty until they can prove themselves innocent.

“We put tribunals in all geo-political zones and they investigated those who were in charge of government money and took all of them in prison until they explained what happened to government’s money. Even I was detained, this is Nigeria.

“That was why I decided to put on agbada and see. I attempted three times up to Supreme Court and winning the fourth time thanking God and technology, I am now qualified to be a solider and a politician.

“… now what I do is when a person cannot justify what he has or fails to declare as the constitution specifies, some of them swear to almighty God that their property doesn’t belong to them until we show them their bank accounts and their companies then we have some peace.’’

The president revealed his administration was determined to recover all stolen funds and properties within and outside the country.

He said all the recovered properties would be sold and the money put in the nation’s treasury to make it impossible to return such properties to the looters in future.

“So, we are recovering as much as we can under the system and this time around I said the properties will be sold and the money put in the treasury.

“The last time they were given back their properties but this time around whoever comes after me no matter how generous he is, he cannot take money from the treasury give it to individuals, it will be impossible.

“But anybody who cannot account for what he has and for refusing to declare, we will have to do something about it,’’ he added.

Sen. Olabiyi Durojaiye, who spoke on behalf of the Afenifere, said they were in the presidential villa to rejoice with the president and the Vice-President Yemi Osinbajo on their re-election for a second term in office.

Durojaiye also commended Buhari for his recognition of June 12 as a landmark in the political history of Nigeria as well as the renaming of Abuja Stadium after late MKO Abiola.

He said: “We are proud of our contributions to your victory through the Yoruba Summit Conference held at the University of Ibadan International Conference Centre on Jan. 29.

“There, we passed a well-applauded motion urging all the people of Western Nigeria origin of voting age to vote for your re-election by virtue of your people-oriented and welfarist APC political programmes and performance. We are happy the people complied.

“We are also here to commend Your Excellency for your recognition of June 12 as a landmark in the political history of Nigeria and for naming the National Stadium in Abuja after Chief MKO Abiola, the hero of Nigeria’s pro-Democracy struggle.

“We are equally glad to note and commend Your Excellency for your efforts to empower the 36 States in Nigeria to have control of the Police as a measure of improving security.’’

He stated that Afenifere was also delighted over the giant stride of the Buhari administration in the field of agriculture, social intervention, revival and modernisation of rail transportation, continuing efforts to complete the Lagos-Ibadan Expressway among other achievements.

He, however, highlighted some major issues of paramount interest to the people of Southwest region in particular and the unity, progress and happiness of the entire country in general.

The Yoruba socio-cultural group which was led by Mr Ayo Fasanmi, made requests bordering on security, education, youth employment, power supply and agriculture.

The National leader of the All Progressives Congress (APC), Sen. Bola Tinubu, who was part of the Afenifere delegation to the villa, urged Nigerians to be united and avoid conflicts in order to ensure speedy development and progress of the country.

According to him, the Yorubas will continue to rally behind Buhari because of his track record and good will for Nigeria. (NAN)