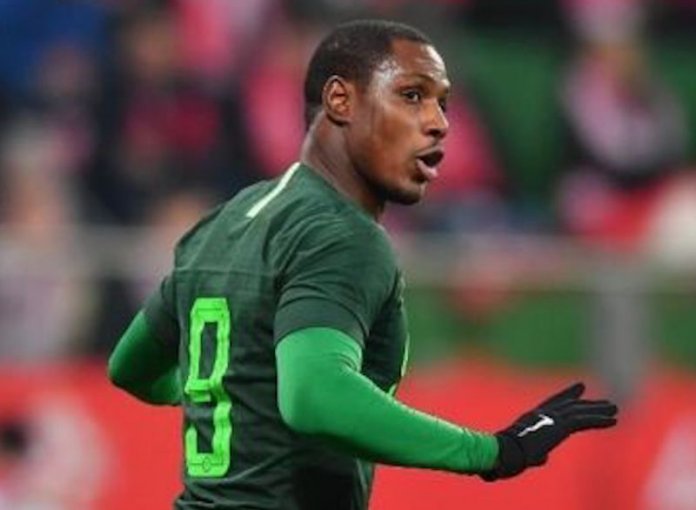 Demola Ojo
Substitute Odion Ighalo came on to net a 77th minute goal after a sumptuous back heel assist by Ola Aina to earn Nigeria’s Super Eagles a hard-fought victory over the Swallows of Burundi.

Nigeria manager Gernot Rohr raised a few eyebrows when the starting line up was revealed as vice captain Ahmed Musa, Leon Balogun and Ighalo were left on the bench, while gangling striker Paul Onuachu got a starting spot.
In a match in which the Eagles dominated possession, Burundi looked dangerous on the break and had several shots on target in the first half.

However Dan Akpeyi – chosen to man the posts ahead of Francis Uzoho and Ikechukwu Ezenwa – made a few crucial saves that will surely do his confidence no harm.

Burundi, the lowest ranked of the 24 teams at the tournament, gave a good account of themselves, and battled hard until Ighalo came on to break the deadlock, earning the Eagles three points and an early lead in Group B.

Onuachu put two headers wide of the Burundian post in the 7th and 13th minute, but a minute later, Cedric Amissi came close to getting the Itamba in front when he latched onto a well –placed pass and stung Akpeyi’s palms with a fierce, close range shot.

Onuachu’s tame shot in the 27th minute was held by the Burundian goalie, and a minute later, Samuel Chukwueze sliced a decent chance in the box horribly wide.

Gael Bigirimana, Abdoul Fiston, Amissi and Said Berahino troubled the Nigerian defence occasionally but failed to get the ball past Akpeyi.

In the second half, Musa’s introduction for captain Mikel Obi quickened Nigeria’s pace but nothing was delivered until Ighalo converted a clever pass by Ola Aina to put the Eagles ahead.

According to Rohr, the Eagles tactic of bringing in Ighalo after the opposition tired worked to perfection.
Revealing that some of the players were recovering from illness caused by a virus, he expressed optimism over the Eagles’ chances of doing well at the AFCON.

“It’s good to start slowly and come higher and higher and hopefully, we have six more games to play.”
President of the Nigeria Football Federation, Mr. Amaju Melvin Pinnick, who is also 1st Vice President of CAF and President of AFCON, dedicated the victory to His Excellency, President Muhammadu Buhari who had spoken to the players to raise their spirits two hours before the match.