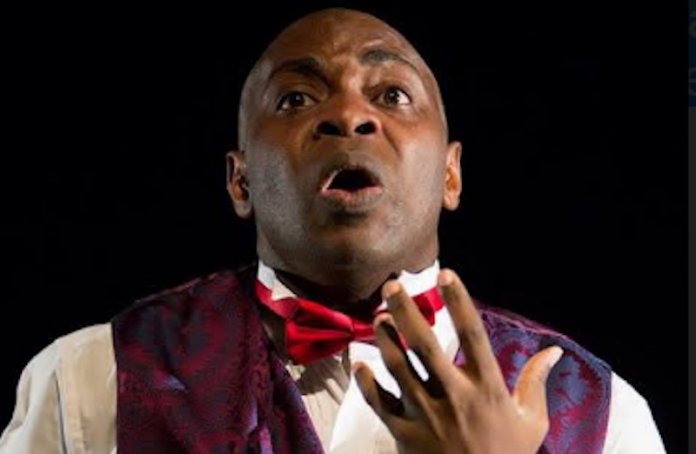 With his Comic Opera House, the tenor Joseph Oparamanuike, a. k. a. Mr Tenor, is set on turning around the fortunes of opera productions and appreciation in Nigeria, he tells Okechukwu Uwaezuoke

Of course, nature couldn’t have possibly stood still. But, to the awestruck audience, it may appeared to have done so. All eyes were riveted on the slender ebony-complexioned tenor, whose age was somewhere in the early 20s. He was effortlessly and flawlessly belting out the familiar Neapolitan song, “O Sole Mio” to the delight of the decorous gathering.

This was at a private concert, organised by a music-loving entrepreneur at his residence in the upscale leafy Lagos mainland neighbourhood, known as Ikeja G. R. A. And the young tenor, who was holding court from a corner of the two-storey building’s living room, was Joseph Oparamanuike.

So much has happened since then. The profile of the Federal University of Technology, Owerri (FUTO) graduate of chemical engineering has grown enough to make him one of the leading figures in the local classical music scene. Soon after parting ways with his engineering job to concentrate on music in 2007, he decided to sit for the Musical Society of Nigeria (MUSON) and Associated Board of Royal Schools of Music (A. B. R. S. M.) graded examination. This was from Grade 8 until he got to the Licentiate of the Royal Schools of Music (L. R. S. M.) level. In 2008 and 2009, he made the best result in West Africa in both Grade 8 and the A. B. R. S. M. diploma in singing and became the first Nigerian to sit for the A. B. R. S. M. diploma in vocal teaching and licentiate in singing in the sub-region. Thus, he was able to secure the Royal Conservatoire of Scotland (R. C. S.) Trust Fund Scholarship with the intention of studying for an M. Mus in performance singing and ended up studying for an M. Mus in opera. This was after an PGDip in performance singing.

While in Scotland, he had the opportunity to regale his audience with Nigerian songs which he performed at his recitals.
Oparamanuike, who in the classical music circles is called Mr Tenor, likens embracing music to answering to the call of the essence of his existence. Passion, he adds, is what eggs him on. Now, he can say with a sense of fulfilment and pride: “I am a full-time musician. And I am currently the MUSON head of opera, singing teacher in both MUSON Basic School and Diploma School and the founder of Comic Opera House.”

Fast-forward to 2016. He registered an opera company, which he named the Comic Opera House. This outfit, which is commonly abbreviated as C. O. H., was launched with an opera performance, titled Don Pasquale. With the company, he hopes to train more opera singers and create more awareness for the genre in Nigeria. This would be possible with adequate training given to those who are interested and gifted with operatic voices.

Even after having travelled far and wide for the cause of classical music, he is not discouraged by the fact that Nigeria still has a long way to go. He is rather consoled by the fact that “the gap has been reduced a bit with many people seeking proper music education.”
“If we can create more awareness on grass root music eduction and, also, if the government can come in, I will say the gap can be closed up more,” he adds.

Still on the government’s support, he continues: “Yes, the government has an immense role to play in music. A lot of subsidies can be put in place to help the classical music industries, the government should look more into the music departments in our universities and help equip them with good facilities and bring more qualified lecturers to add to the ones we have.”
Talking about facilities, he says that there are “very few good concert halls in Nigeria and the standard are quite good but can be better.”

Besides, he believes his efforts so far are beginning to yield fruits. “On the scale of 1 to 10, I would say we are on 7. We still have more to do in the area of having full orchestra for our productions.”
On this note, he sees a brighter future for classical music in Nigeria, declaring that “things are actually changing and I am so hopeful that things will definitely come up well.”

Already, since 2016, he has organised about 10 opera productions so far. Among the highlights of these productions was his featuring at The Switzerland Consulate General 2018 Opera Performance with the MUSON as Rodolfo in Puccini’s La Boheme and his singing as Tonio in Donizetti’s La Fille Du Regiment for the MUSON. He also sang as Tamino in Mozart’s Die Zauberflöte for Opera Abuja in December 2016 and as Nemorino in L’Elisir D’Amore for MUSON in April 2016.

At the launch of the C. O. H. in September 2016, he appeared as Ernesto in Donizetti’s Don Pasquale. This was after singing, about two years earlier, the concert version of Edgardo in Donizetti’s Lucia Di Lammermoor with the Scottish Opera Orchestra in February 2014.

In January 2018, he toured with the Chorakademie Lübeck and Bamberg Choir to Hong Kong for the production of Wagner’s Götterdämmerung with Hong Kong Philharmonic Company. Later in July that year, he conducted and directed Sullivan’s The Yeomen of the Guard. Earlier, he had conducted and directed two opera productions for MTNF/MUSON School of Music: Sullivan’s Patience in July 2016 and Mozart’s Magic Flute in July 2017.

In addition, he had made two performance tours with the Chorakademie Lübeck. These tours saw him hop-scotching through Europe to Asia and to North America in 2015. This was a year after his performance at the Commonwealth Week as part of the 2014 Games held in Glasgow (Scotland) in the presence of Her Majesty, Queen Elizabeth II and His Royal Highness The Duke of Edinburgh. He was subsequently invited to sing again at the 2014 Commonwealth Broadcasting Association Conference.

Oparamanuike’s first exposure to music dates way back to when, as an impressionable child, he would listen and watch his late father sing along in an enchanting tenor voice to the LPs of a singers like Jim Reeves. Later, in 1988, he joined the school choir of St. Peter Claver Seminary, Okpala, Imo State. “I was an alto singer,” he recalls. “In 1995, I started singing tenor and this was my first time of singing solo as a tenor with the St. Joseph Catholic Youth Choir, Ulakwo, Imo State.”

He would later become the choirmaster of both the youth and parish choirs. When he gained admission into the Federal University of Technology Owerri (FUTO) to study chemical engineering, he became a member of St. Thomas Aquinas Catholic Chaplaincy Choir (now called Golden Voices) at the tertiary institution. Three years later, he took over the reins as the choirmaster and held the first ever concert in FUTO. “I must also say I had a good musical moment with Cororosa as a member and one of the conductors.”
It was after his graduation from the university that he moved to Lagos for his National Youth Service Corps in 2002. He joined the Sir Emeka Nwokedi-led MUSON Choir the following year and later won the MUSON Talent Hunt Competition, which gave him a new breakthrough in his musical career.

As his sources of inspiration, he names Maria Aseeva (a former MUSON resident pianist), Professor Laz Ekwueme as well as the three tenors: Andrea Bocelli, Juan Diego Florez and Lawrence Brownlee, among others.