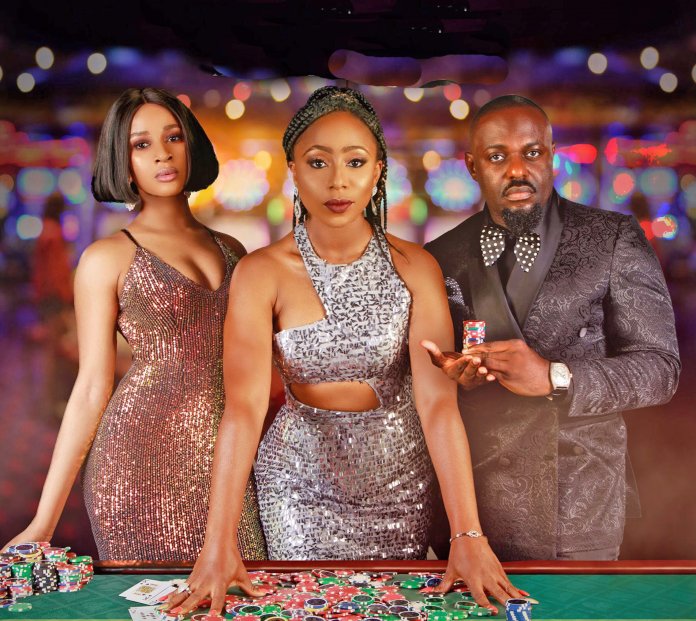 From the plot, women seem to be playing a big role in the movie, “The Set Up.” However, the surprise element really is that the movie looks nothing close to emotional. Ferdinand Ekechukwu reports

A star-studded cast, including Adesua Etomi-Wellington, Kehinde Bankole, Joke Silva, Jim Iyke, Dakore Egbosun Akande, Tina Mba, and Damilare Kuku among others, make up the pack in an upcoming movie titled ‘The Set Up’. The film is an Inkblot Productions project, in collaboration with FilmOne Distribution and Anakle Films. Inkblot is known for dishing out high quality cinema films, picture-wise, that have shaped the Nollywood film industry in recent times.

A look at its movie collection shows the Wedding Party 1 & 2, New Money, The Arbitration, The Department, Out of Luck, Up North, Merry Men, and now ‘The Set Up’, which is out in cinemas from August 9, is a thriller directed by Niyi Akinmolayan.

Here is the plot for the audience who might want to pin the lead cast to their particular role: The Set Up tells the story of Chike (Adesua Etomi Wellington) a young drug smuggler who gets more than she bargains for and is drawn into a web of deceit when she is hired by a socialite (Jim Iyke) to assist with his scheme to marry a wealthy heiress (Dakore Egbuson Akande). Other notable actors in the cast ensemble are Ayo Ayoola, Wendy Lawal, and Marie Humbert.

Touted a riveting thriller of grit, deceit, and survival, written by Naz Onuzo, a one minute teaser for The Set Up which dropped a fortnight ago leaves pulsating scenes without any voices or lines but music in the background. Even so, the teaser shows again Adesua, star of another upcoming film, Muna where she gets to play a badass killer alongside Adam Huss and Robert Miano in the long-awaited movie.

Other notable films Adesua has appeared in include A Soldier’s Story (2015), Out of Luck (2015), and Couple of Days (2016). Etomi played Shiela in the fourth and fifth seasons of Shuga, a television soap opera about HIV/AIDS prevention. She began starring as Amaka Obiora, an undercover police officer, in Yemisi Wada’s crime series, LasGidi Cops, which debuted in June 2016 on television.

Adesua Etomi, on her career strength, recently featured on the cover of Vogue Magazine April 2019 edition tagged “The Global Issue”, alongside 13 other global superstars. Her acting journey began when she joined the drama club in her primary school. At 13, she moved to the United Kingdom after briefly attending Queen’s College in Lagos. There, she got a diploma in “Physical Theatre, Musical Theatre and Performing Arts” from City College Coventry. She also studied drama and performance at the University of Wolverhampton where she graduated with first-class honours.

Speaking with Vogue, the actress revealed her love for Nollywood, “I love, love, love Nollywood,” she said during the shoot. “I feel like she’s my baby, and it’s my responsibility, along with a lot of other performers, to grow her.”

Jim Iyke is an established brand name in the industry. He bounced back, after a spell away from the scene, to star in a couple of hit movies like Merry Men and the recent steamy love film, Cold Feet. With over 150 movies, Jim Iyke comes in on the list of the leading male artists in the industry as well as one of the highest paid actors. The charming actor made his debut in 2001.

From his humble acting days, he geared off to the level of film and music production. As a film producer, Jim Iyke has produced a couple of movies in London, starring international actress Judy Shekoni and Tangerine Martins. He also went on to produce 2 Dollarz, a sequel to 1 Dollar.

From the plot and the teaser of ‘The Set Up’, women are playing a big role, just like most of Akinmolayan’s films. His artistic works deserve to be seen in the best pictures. The surprise element really is that the movie looks nothing close to emotional. The Setup is one of three different movies promised by Inkblot Productions this year and will be the 10th film from the production company which birthed in 2015.

Notably about the movie director is that he uses an idealistic approach for all movies he directs and by default, his movies are penetrating. Akinmolayan is the founder and Creative Director of Anthill Productions, a media production facility he set up in 2008. At the start of his professional career, he worked as an apprentice to Nollywood filmmakers, and honed his skills in video editing, animations and visual effects.

His debut film titled Kajola, released in 2010, was an experiment in visual effects, but was panned by filmmakers and critics alike. In 2014, he directed the Nigerian dance movie Make a Move. The movie was nominated for the 2015 Africa Magic Viewers’ Choice Awards (AMVCA) for Best Movie (Drama). The same year, Akinmolayan also directed the critically acclaimed movie, ‘Falling’, featuring Adesua Etomi,  Desmond Elliot and Blossom Chukwujekwu. The film earned him a nomination for Best Director at the 2016 Nigeria Entertainment Awards (NEA) and the lead actress, Adesua, won the award for Best Actress at the 2016 AMVCA.