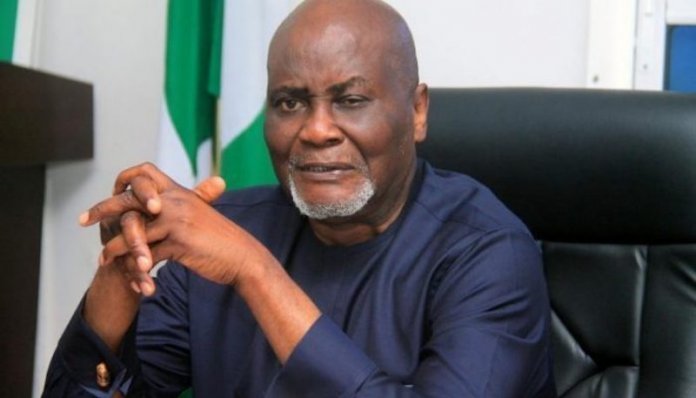 Professor Charles Quaker Dokubo, the Presidential Adviser on Niger Delta/Coordinator of the Presidential Amnesty Programme, is at home with conflict management. At the University of Bradford, he obtained a Masters Degree in Peace Studies, before continuing his doctoral degree in Nuclear Weapon Proliferation and its control. In 1985, he was awarded his doctoral degree in the same University of Bradford. He was later appointed a temporary lecturer in the department before proceeding to Nigeria in 1993.

He is the author and editor of various scholarly books and journals including, ‘Nigeria’s Security Interest in Africa’, ‘Nuclear Proliferation and the Probability of Nuclear War: The effectiveness of the Nuclear Non- Proliferation Regime’. His latest publication is the ‘Defence Policy of Nigeria: Capability and Contest’.

He was a Research Professor in the Nigerian Institute of International Affairs, Lagos, when he got his current job. And he assumed office at a time the amnesty programme was at its ‘’Reintegration Phase’’ – a phase that is hinged on training, education/knowledge and vocational/skills acquisition. Monitors of the programme said one thing stood out undoubtedly, since the inauguration of the programme to the time Professor Dokubo took over: His predecessors were only interested in education and training without option of empowerment and job placement for the target-group.

The amnesty programme — a special institution that will not only grant amnesty to the Niger Delta militants but also to oversee the human development capacity of the region, was initiated by the late President Umaru Yar’Adua om June 25, 2009 following the breakdown and the failure of all other initiatives to the growth and the development of the Niger Delta region.

The amnesty programme was created as a policy response to the menace of social agitations that had undermine insecurity and the development of the region in which the agitators were involved in seemingly destructive actions: blowing up of pipelines, kidnapping of multinational oil company’s workers and other oil infrastructures.

The success of the programme was to be determined by the disposition and keenness of the agitators to surrender their arms and unconditionally, renounce militancy and sign an undertaking to this effect. And in return, the federal government pledged its pledge to institute programmes to ‘’rehabilitate and reintegrate’’ ex-militants under a structured Disarmament, Demobilization, Rehabilitation and Reintegration (DDRR) programme.

From the design, the DDRR programmme was not the typically one frequently considered to reflect what many peace-building strategists have under the framework of ordinary peace agreement; although it drew a lot from international standards and principles that are consistent with the national context.

So far, the programme has undergone a transcendental progression through the various phases of Disarmament, Demobilization and Rehabilitation.

Many international organisations working on the Niger Delta’s projects, see the turning point of PAP under the leadership of Professor Dokubo. To be sure, on assuming office, he injected a new thinking and dimension to the programme: the introduction of job placement programmes, micro-credit, cooperatives, business support, monitoring and evaluation.

Dokubo’s projection was that for the programme to achieve its objectives, the Niger-Delta youths need to be taught to go through training and education, and be assisted to rediscover their potentials and further made to be self-reliant, as this will keep them engaged. And records show that since he took over the PAP, the number of ex-militants that have graduated has increased geometrically to over 20, 000. ‘’About 3, 243 persons are at present undergoing training while 5, 578 are at the same time awaiting training; this is because the PAP does the training in batches,’’ Professor Dokubo told journalists recently.

In the education programmes, a breakdown shows that, of 2,577 persons who are currently in schools, 1,060 persons are studying in not less than 10 universities — both private and government locally, while 1,517 are studying abroad in over 50 universities – spread across Europe, Asia, Africa and Americas.

‘’PAP is doing all this knowing that knowledge and education are key factors to the full and effective participation of youths in the processes of social, economic and political development,” the presidential adviser stated; and adding that what education does to the youth is that it gives them the knowledge, capacities, skills and ethical values needed to fulfil their role as agents of development, good governance, social inclusion, tolerance and peace.

Dokubo, who was a Research Professor at the Nigerian Institute of International Affairs, Lagos may have also recognised the fact that greater focus on universal access to education, quality education, human rights education and learning are key for young people to be able to address their aspirations and challenges, fulfil their potential, and influence current and future social and economic conditions and opportunities.

For those following the programmes of the PAP under the leadership of Dokubo, skills/vocational training is seen as another area where he has done tremendously well. The skills acquisition involves the development of a new skill usually gained through training or experience. While vocational skill is a highly useful education as its occupational content is such that the trainee acquires skills, attitudes, interest and knowledge to perform socially and economically scientific knowledge.

Also, a figures obtained from the PAP’s office suggest that 237 are receiving specialised vocational training, 217 in vocational/skills acquisition in Nigeria, and, 20 undergoing specialised training Aviation training at the Nigerian College of Aviation Technology-NCAT. This shows that the training component of the reintegration programme have had modest impact on human capacity development in the Niger Delta.

Releasing that in the Nigerian scenarios, many Niger-Delta youths and citizens do not have the financial muscles to set-up their businesses, and further recognizing that governments alone cannot provide jobs for its teeming youth population, PAP has developed programmes towards the expansion of economic activities through entrepreneurship and job placements of all trained delegates.

Already, PAP is said to be liaising with different organisations such as United Nations Institute for Training and Research (UNITAR) to help in this regards. Even although, post-training engagement for already trained ex-militants remains daunting, the presidential adviser on Niger Delta is said to have so far empowered and facilitated the set-up of small and medium scale businesses for nearly 4,450 ex-militants. ‘’Some of the many trained delegates have secured direct employment in the public and private sectors within and outside the country’’, Dokubo stated recently.

For many, the PAP Coordinator, Professor Dokubo has restructured and created the programme such that in the long run, it will proffer solution to the endemic crisis and give room to sustainable security in the region and to Nigeria as a whole. The whole ideal may be that if he gives these young men and women from the Niger-Delta favourable conditions and policies to enable them gain employment, it will be keep them busy, invariably, and they will not have time for much agitation; the youths will be properly empowered within the region; and also, a potential employer of labour, thus contributing to economic growth as well as development.

For Professor Dokubo, militancy did not end with the declaration of the PAP; according to him, that would amount to expecting that armed robbery would end when armed robbers are condemned and killed.

‘’That means training is a continuous process; rehabilitation is continuous; that is why it has been difficult to bring the amnesty to an abrupt end’’, Dokubo told a group of editors recently in Abuja.

He said that containing these former combatants is a very sensitive assignment, describing the task as ‘’a generational’’ issue that cannot be wiped away within a twinkle of an eye.

He added, ‘’As long as oil remains and as long as injustices exist in the operations of the oil companies, people will feel cheated and will continue to revolt. We must always anticipate this.

‘’Second, there is what is called economic re-integration. This implies not just the training in specialised or general skills, but the ability of the system to absorb graduates of such training at the completion of their courses. We must find jobs for the ex-combatants.

‘’Something must engage them and turn their attention away from their old lifestyle of militancy. This is a challenge that government alone cannot handle.’’

The conflict management expert explained that it is against the spirit of re-integration, when the ex-combatants—after the disarmament and demobilisation and the training are returned to the same environment and lifestyle that gave rise to militancy.

‘’Some people have often asked why we are still paying the stipends to some of the ex-combatants. This question becomes necessary because some of them have already undergone trainings and are expected to stand on their own. However, it does not end there.

The answer is this: by the rules of DDRR, those who have undergone training must be fully empowered with functional employment; they must be re-inserted into the larger society with alternative means of livelihood other than militancy. This is what rehabilitation and re-integration is all about’’, Professor Dokubo explained.

He said that payment of stipends will continue for the time being — until it is replaced with effective way of life for the ex-combatants, saying they must first be functionally re-integrated before they are left alone.

According to him, anything to the contrary will be counter-productive, as there are provisions in the re-integration process as to when payment of stipends will stop, adding that it certainly will not continue forever.

But when will the amnesty programmes winding down its operations? ‘’Amnesty is a gradual process that will be completed someday, soon and it is the federal government that will determine that,” he stated.