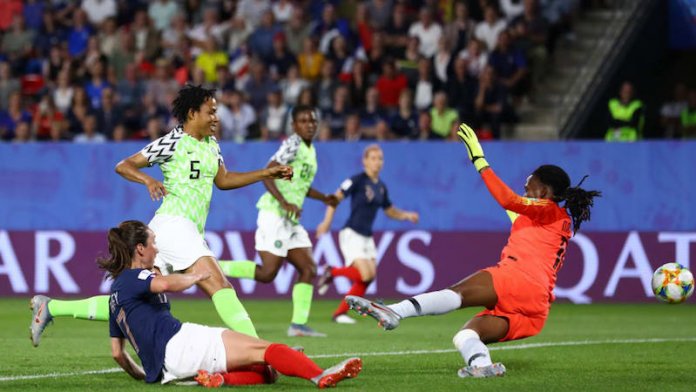 African champions Super Falcons lost their last Group A match of the ongoing FIFA Women’s World Cup in Rennes to France after a twice-taken Video Assistant Referee (VAR) penalty by Wendie Renard gave the host a 1-0 win over Nigeria.

With the victory, France topped the group on maximum nine points from three matches. Norway that defeated South Korea 2-0 is the runner up on six points with Nigeria third on three points.

The initial penalty – awarded after a VAR review for a foul on Viviane Asseyi – hit the post and rolled to the touch line.

But keeper Super Falcons’ Goalkeeper, Chiamaka Nnadozie was ruled to have moved off her line early and Renard slotted the re-taken spot kick.

Nnadozie was a victim of one of the new FIFA rules which came into effect on June 1.

That specific rule says: ‘The goalkeeper must have one of her feet partly on the goal-line (or above it if jumping) when the kick is taken. She cannot stand behind or in front of the line.’

Despite the set back, Falcons still have a big chance of making the knockout stage as one of the best third-placed teams. They are presently third in the overall Third best teams standing behind China and Australia.

With only three points from their three matches and a two-goal deficit, the Falcons’ progress to the knockout rounds for the first time in 20 years will be sealed if Argentina are unable to accomplish a handsome win over Scotland in their final Group D game on Thursday, or Cameroon are unable to defeat New Zealand by more than one goal in their final Group E duel on Friday.

China, with four points in Group B, and Australia, with three points already from two matches in Group C, look already good enough for the Round of 16.

France, meanwhile, heads to Le Havre to play a last-16 tie against, as yet, unknown opponents on 23 June.

Yesterday’s game was an unconvincing display by Corinne Diacre’s side against a team they had previously walloped 8-0 in a friendly last year.

Nigeria’s Falcons are ranked 38th in the world. France was guilty of wasteful finishing before the late drama in Rennes.

The Thomas Dennerby’s Nigerian ladies who had produced a gritty defensive performance, were on course for a deserved point when that VAR check proved Ngozi Ebere fouled Asseyi from behind.

Ebere, who had been booked in the first half, was sent off for a second yellow card before Renard’s first penalty hit a post.

However, the officials adjudged Nnadozie had left her line early and Renard duly scored from the second attempt.