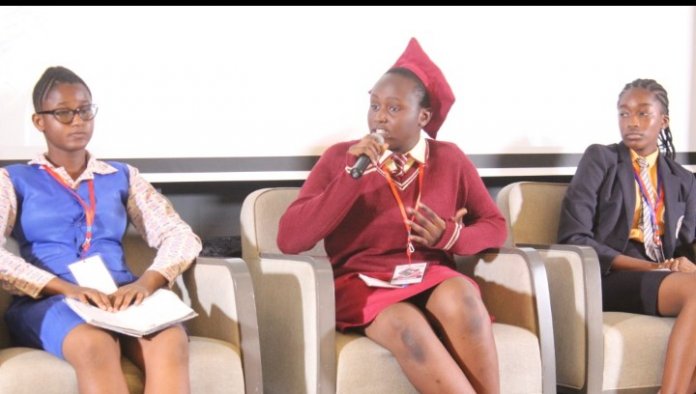 By Vanessa Obioha
Doyinsola Ogunshola who represented Vivian Fowler Memorial College  at the just concluded Teen  Development Summit, 2019 organized by Rubyplus Africa emerged the best speaker and won the grand prize of N250,000 as well as a trophy for her school. Royal college, Otta and Julliard Academy also won the 2nd and 3rd positions and were awarded N100,000 and N50,000 thousand respectively while other speakers took home consolation prizes.
The summit which aimed at engaging articulate teenagers in positive discussions had Bisola Bello as the moderator of the panel sessions and Nabila Ngalam of Juilliard Academy, Onafowokan Marian Yewande of Holy Child College, Doyinsola Maria Ogunshola of Vivian Fowler Memorial college, Okorocha Kosisochukwu Joan of Great Cambridge High school, Olatidoye Olalekan Oluwaseunfunmi of Royal College and Ezeofor P. Akachukwu as teen panelists who deliberated extensively on several topics relating to the theme of the year, ‘The African Teenager: An Endangered Specie’. The topics discussed included ‘Drug Abuse Among Teenagers’, ‘Teen Pregnancy’, ‘Teen Prostitution’ and cyber crime.
The highly anticipated annual summit organized by Rubyplus Africa is one of its kind in Nigeria and Africa as a whole. Whilst speaking to teenagers, parents, teachers, representatives of government and corporate bodies at the event, the founder and president of Rubyplus Africa, Jacqueline Emmanuel reiterated the need for African teenagers to be given a voice  on issues that affect them and their society as no one can tell their stories better. She also enjoined major stakeholders to partner with Ruby Africa to ensure that the future of African teenagers is well secured.
This year’s summit which was well attended by several participants had key personalities speak to the teenagers including Mr Babatunde Gbadamosi, the chief guest at the occasion who spoke to the teenagers on taking charge of their future and being innovative in order to become Africa’s leaders. Nigeria’s United Nations Youth Ambassador, former WOTCLEF director and Nigerian youth intervention Movement , Amb. Abayomi Mighty also delivered a keynote speech encouraging teenagers to believe in themselves no matter where they come from. Representatives of NAPTIP and NDLEA also impacted the teenagers during their speech.
A special vote of thanks which was delivered by Rubyplus Africa’s Founder, Mrs Jacqueline Emmanuel, as  recognized the support of corporate sponsors, Nasco Group and Erisco Foods as well as humanitarian sponsors which included Chief Mrs E.N Erukaye, Mr and Mrs Oguntoye and Barr. and Mrs Akintola.