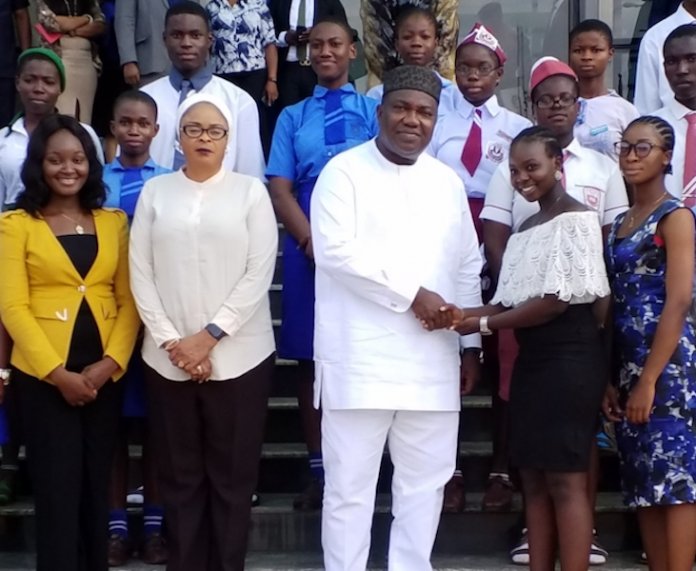 Children of Enugu State have commended Governor Ifeanyi Ugwuanyi for his remarkable contributions towards their wellbeing, stating that the state through his administration has become “a beacon of hope for destitute, abandoned and erstwhile hopeless children.”

Speaking separately when members of Enugu State Children’s Parliament led by its Speaker, Nkemakonam Oragwu, paid a courtesy visit to Gov. Ugwuanyi at the Government House, Enugu, to commemorate this year’s Day of the African Child, the children expressed gratitude to the governor for signing the Child Rights and Responsibility Act into Law.

They said they now had an enforceable law in the state with “a strong assurance that our rights and interests are protected”.

In her presentation at the event which was facilitated by the governor’s wife’s pet project, Ugo’s Touch of Life Foundation (U-TOLF), the Speaker of the Children’s Parliament, Oragwu, on behalf of the children, congratulated Gov. Ugwuanyi for his reelection and subsequent inauguration, adding that the accomplishments were “proof that the transformation experienced by the state is highly felt and appreciated by the entire people of Enugu State, including the children”.

She also thanked the governor for the domestication of the Child Rights Law in the state through the establishment of Family Courts in all the zones of the state, expressing delight that “children can freely defend their cases in these juvenile courts”.

According to her, “this action of His Excellency shows that you do not just talk the talk but equally walk your talk”.

The children also applauded Gov. Ugwuanyi for the massive construction and renovation of primary and secondary school blocks all over the state, stressing that “students and teachers can now learn and teach in a more conducive environment”.

They equally appreciated the governor for the newly renovated correctional/ rehabilitation centre for children which was recently inaugurated by his wife, Mrs. Monica Ugwuanyi, and urged him to sustain the tempo of schools renovation in the state and reinforcement of his administration’s educational programmes and policies for the children to further enhance their wellbeing.

In his response, Gov. Ugwuanyi who warmly welcomed the children and their teachers to the Government House, Enugu, stated that the “Day of the African Child” offered his administration another opportunity to renew its commitment towards improving the plight of the vulnerable children in the society, saying: “It is indeed a welcome development and a service to humanity that the welfare of our children is promoted to a wider audience”.

The governor maintained that his administration had continued in its efforts to ensure the survival, development and protection of children by ensuring that “every child benefits fully from quality education, protection against violence, exploitation, neglect and abuse as well as access to the basic necessities of life”.

His words: “We have recorded several achievements in this regard, including the passing into law of the Child Rights Bill and also enabling, training, empowering and employing skilled social workers.

“We have also set up the State Child Rights Implementation Committee, inaugurated the Family Courts and set up the ‘Oasis of Hope’ in collaboration with the Ministry of Health.

“All these have been done in a concerted effort to ensure that the wellbeing and welfare of the most vulnerable in our society are not overlooked”.

Gov. Ugwuanyi therefore, thanked Ugo’s Touch of Life Foundation for its immense contributions to the wellbeing of the children, assuring the foundation of the state government’s cooperation and determination to always uphold the rights of the Enugu Children and address any obstacle against the realisation of their noble cause.