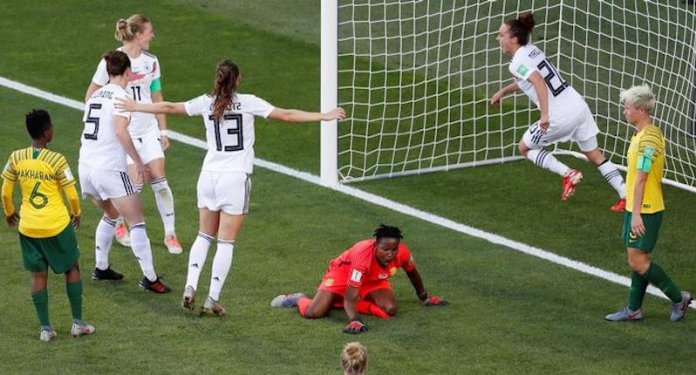 Germany punished an error-strewn display from South Africa to finish top of Group B at the Women’s World Cup.

The two-time winners had ample chances to score more than four against debutants Banyana Banyana, who leave France having failed to earn a point.

Melanie Leupolz headed in the opener, then an awful error by keeper Andile Dlamini gifted Sara Dabritz a tap-in.

Wolfsburg’s Alexandra Popp nodded in a third before the break and Lina Magull added another from a yard out.

Germany, one of the favourites for the title, had only found the net twice in their previous two group games, but against a brittle South African defence they ran riot.

They will now play a third-placed team from either Group A, C or D in Grenoble for a place in the quarter-finals.

South Africa’s coach Desiree Ellis will likely have been disappointed with her side’s poor first-half display, highlighted when Dlamini flapped at a low cross from Verena Schweers which led to Dabritz’s goal.

Her keeper did improve after the break, making a brilliant point-blank save from Dabritz, while pacy substitute striker Thembi Kgatlana was denied a goal in a one-on-one situation by Germany’s Almuth Schult.