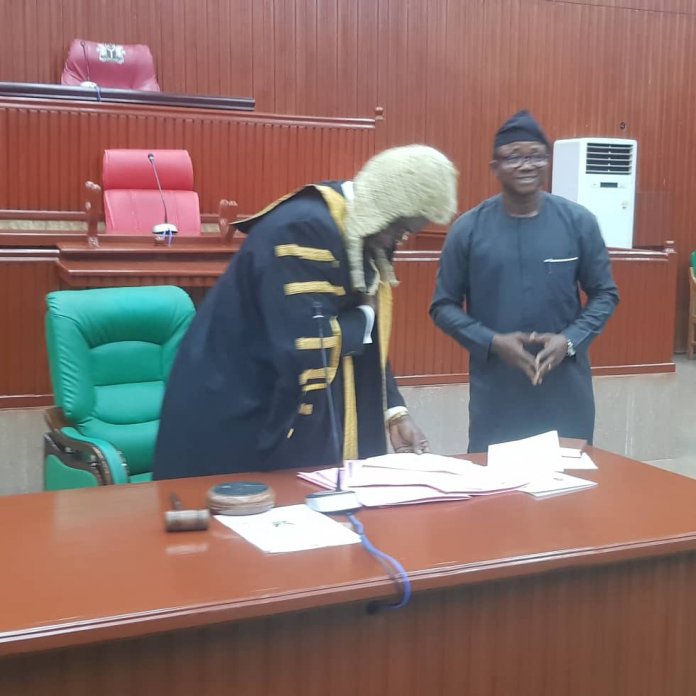 The much-anticipated inauguration of the Edo state House of Assembly took place in Benin City at around 3pm, on Monday, June 17, 2019.

The Clerk of the Edo House of Assembly, Alhaji Audu Yahaya Omogbai, ushered the members-elect into the chamber and read out the letter of proclamation transmitted to the office of the clerk by the Executive Governor of Edo State, Mr Godwin Obaseki.

After reading the letter, the clerk proclaimed the House and the members-elect began the process of electing the House leadership, with Rt. Hon. Frank Okiye of Esan North East Constituency I, emerging the Speaker, while Hon. Yekini Idiaye of Akoko Edo Constituency I, was elected Deputy Speaker.

Upon completion of the process of swearing-in, the Speaker, Rt. Hon. Okiye took charge of proceedings and thanked all the members-elect present for the confidence reposed in him, promising that he would work for the people of Edo State.

He also called on members-elect who have not satisfied the process of swearing-in, which includes the completion of the asset declaration form, to do so speedily so they could be inaugurated to undertake the task for which the people elected them.

The speaker also declared that the lines of communication with the executive arm of government and all other organs of government officially open.

According to him, “It is with the deepest sense of humility that I receive this call to serve the people and I assure that I will do all in my power to serve their best interest at all times. I congratulate my colleagues and fellow members who are today inaugurated and urge other members-elect who are yet to meet up with the requirements for inauguration to do so without delay so they can join this honorable house in the discharge of its responsibilities.”

The motion for adjournment was raised by the Speaker and the House was adjourned till July 17, 2019.

The reason for the long period of adjournment, it was gathered, was to make room for logistics for their allocation of accommodation, offices, vehicles and other materials to make for smooth legislative activities.

A legislative committee was set up to superintend over the logistics of the allocation to ensure a smooth exercise. The committee was chaired by Hon. Roland Asoro of Orhionwon South Constituency