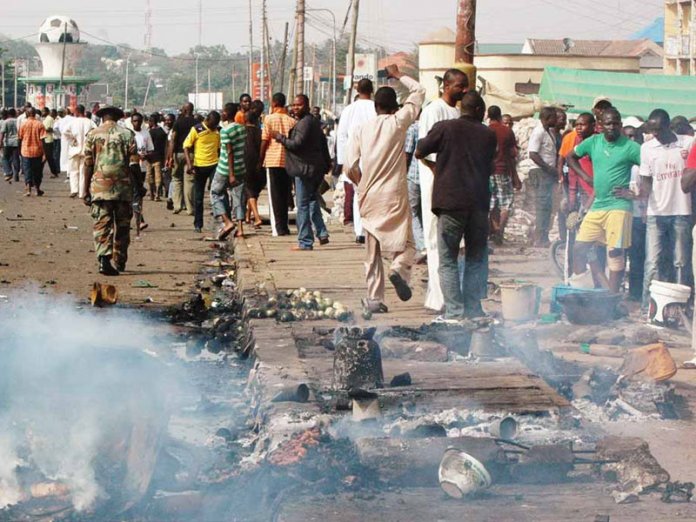 Two people were killed and several others injured as bandits suspected to be herdsmen attacked Tudiri community on the outskirts of Jalingo, Taraba state capital, on Sunday night.

Several houses were equally razed by the bandits just as several vehicles and tricycles were vandalised by irate youths protesting the attack.

But the state police command said nobody was killed in the attack despite journalists having pictures of those that were burnt to death in their houses by the attackers.

While the attack raged, Kona youths, who were predominant residents of Tudiri, blocked and set up bonfires on the Jalingo-Yola road at Nukkai and Kasuwan Bera areas and attacked several unsuspecting motorists to protests the attack on their community.

In a statement issued by the state police command which was signed by the Police Public Relations Office (PPRO), David Misal, the command stated that several shops were looted by the youths.

It took the intervention of a combined team of soldiers and mobile policemen to dismantle the the bonfire and bring the situation under control even as gunshots continued to rent the air till late into the night thereby causing serious apprehension among residents of Jalingo.

According to the police, “at about 1800hrs, heavily armed bandits on motorcycles invaded Tudiri Village via Jauro Yinu ward, Ardo Kola LGA who set houses ablaze.

“Three vehicles, two motorcycles and three Tricycles were burnt, but with the timely intervention of security operatives,the situation was brought under control.

“No death was recorded and the situation is closely being monitored by the security agencies in a bid to forestall any further breakdown of law and order.”

While normalcy is gradually returning to the state capital, some residents in the affected areas were seen moving their valuables to other areas.

Meanwhile, Senior Special Assistant on Media and Publicity to the state governor, Bala Dan Abu, allayed fears of residents of the town of further attacks saying government has mobilised and reinforced security in the town.

Dan Abu, who briefed newsmen in a telephone interview, urged the people of the state to go about their normal businesses and assured of them of government’s commitment to their security.