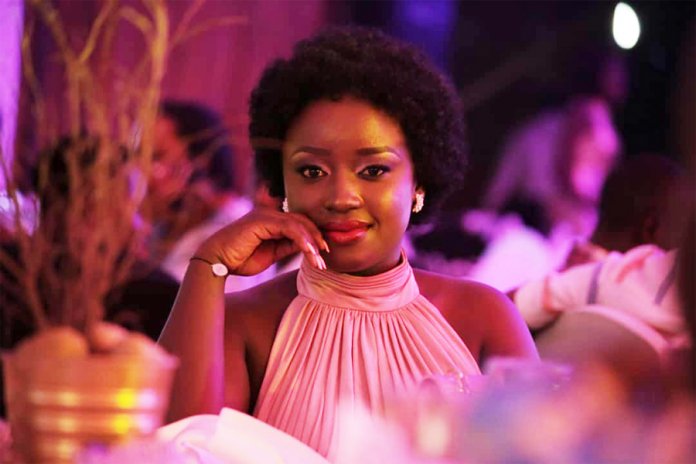 Ugandan actress Joan Agaba  comes off as the girl next door. Truly,  she is. Though scholarly minded with a combination of brain and beauty, this ‘girl next door’ is thousand miles away in Kampala, Uganda where she shines as a screen star. With a slew of movie roles to her credit, the 2018 AMVCAs Best Actress nominee talks about her ambition, career journey, her industry back home in Uganda with Ferdinand Ekechukwu

How long have you been acting?

I started acting in 2015, it came as a joke I had actually escorted a friend for auditions, and I kept laughing at her that she was crazy. As I stood out waiting for her to get done with her auditions, they kept pairing characters, so he came and begged me to pair with him. I laughed, it was crazy… He was willing to help me with the basics, so I gave in. And we auditioned together. In the auditioning room, the director asked him to step aside and asked me to monologue alone. I almost told him I wasn’t interested. After the auditions, we had to wait for results. I was the first person they called and my heart skipped. I did not know why, after all I wasn’t interested. I was told I had passed on probation. I felt bad, so embarrassed and I promised myself I was never going back to such things. My friend kept calling me to join in for rehearsals; at times I would be bored at home… I started going and that was how I became part of the pack. It was not easy for her to get me to go for rehearsals.

Before this experience what were you doing?

Before all this, I was in school doing Bachelors in Human Resource Management at Makerere University in Uganda. At the same time, I had a women’s cloth shop in the City Center located in Kampala (on Kampala Road). I basically had some little pocket change on me. I’m currently completing my Masters at Makerere University Business School.

How big is your movie industry compared to Ghana, Nigerian or any other country you can think of in Africa?

Is there any government support whatsoever, maybe in terms of funding or subvention to your industry?

Oh sure, the Uganda Communications Commission (UCC) is doing a great job in elevating the film industry; it’s the same body that organises the famous film festival in Uganda every year – the Uganda Film Festival.

So far how many movies have you featured in and any acting offer outside your country?

In 2016, I was given an extra role in the movie Freedom which overwhelmed awards in the Uganda Film Festival. In 2017, I was given a lead character in the movie ‘Torture’ in which I won Best Actress in the Uganda Film Festival and FESTICAB award winners in Burundi. In this same movie, I was nominated in the Best Actress category ay the 2018 AMVCA in Nigeria. In 2018, I was nominated Best Supporting Actress for my role in the movie ‘94 Terror’. I have a TV series, called Mistakes Galz Do (airing since 2017). I have not yet done work beyond boarders, its every actors dream.

Tell us how you feel coming to Nigeria the first time for the AMVCAs awards last year  and what was the experience like?

Honestly my first visit to Nigeria caught me off guard. Nigerians love themselves a lot.

Was your AMVCA best actress nomination feat convincing enough for you to see acting as a thing you would want to grow with professionally or something you have just got your hands doing at the moment pending?

I discovered I was meant to be an actress before I even scooped my AMVCA nomination. The rate at which I fell in love with acting was at a very high speed, I love acting and i’m certain i’m not giving up soon. I dream of being Uganda’s Meryl Streep of my generation… to me it (acting) just comes naturally.

How much of interest do you have in Nigeria film industry?

The Nigerian industry has grown compared to Uganda’s, however my greatest interest is seeing the African film industry rise to greater heights. I would love to work in Nigeria as much as I would love with any other African country.

Which Nigerian actors easily come to your mind and would you love to be on set with?

I love Mercy Johnson, she’s natural, she embraces her character roles to my satisfaction. She’s amazing too.

Culturally what do you think is the most interesting thing about your country that would interest a first time visitor?

Uganda being the pearl of Africa the environment alone is fascinating; the people are lone and so welcoming. The green all over my country is beautiful, the people too.

Tell us about your family back ground and your childhood memories while growing up?

I am from a very humble Christian family under the care of a loving mother who I was blessed with as an only child and my dad’s first born. My mother is South Sudanese and my dad is Ugandan. My parents don’t own any titles. I was always next to my mom. We played together. She was always my big sister.

What other form(s) of art appeals to you?

I love music; people say I have a good voice; however I have not put my attention to it.