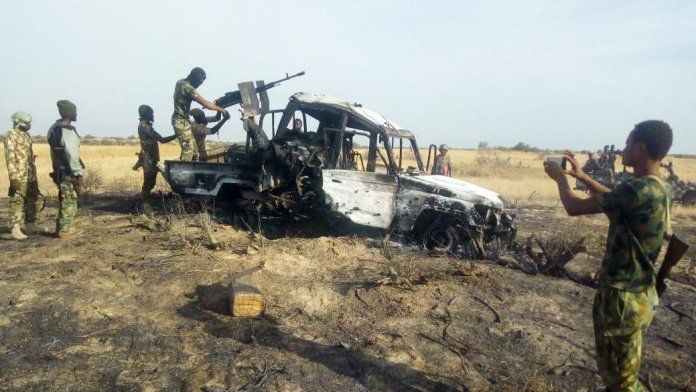 The Commanding Officer of the 158 Battalion of the Nigerian Army, Lt. Col. Azubuike, and several of his troops have been killed by fighters of the Islamic State of West Africa Province (ISWAP).

The gallant soldiers fell during an attack on their facility located at Kareto village, in Mobbar Local Government Area, north of Borno State, on Wednesday.

ISWAP had, in the last three days, laid siege on parts of Borno State, killing scores of soldiers. According to sources, the terrorists had taken the soldiers by surprise, and were unable to make needed resistance.

A top military source, who confirmed the incident, told our correspondent on telephone that the attackers were not repelled, and that troops at the location were dislodged by the rampaging terrorists.

The source said: “On 12 Jun 2019, BHTs/ISWAP elements attacked troops of 158 Battalion located at Kareto Village, Mobbar LGA of Borno State. Attack was not repelled and troops at the location were dislodged.”

The source said details of the attack were scanty but that the Commanding Officer (CO) of 158 Battalion, Lt Col Azuibuke was reported killed in action (KIA).

He said further details were being expected from the military authorities in the area, even as he revealed that after the attack, members of the ISWAP or Boko Haram, withdrew to Fuchimiram Village, about six kilometres west of Kareto.

The top military source, noted that it was likely that the terrorists were still in the location.

He said there was need for air strikes on Fuchimiram and other locations around Kareto to ward off the terrorist believed to be hibernating there.

The source further lamented that the Lake Chad axis had been under attack of the terrorists in recent days, pointing out that in the last one week, the terrorists had attacked troops at Gashigar and Kareto, both in Mobbar local government area of Borno State.

He expressed concern that the attacks might continue for some time, given the level of desperation shown by the terrorists.

The army chief stressed the urgent need to put all units in the axes covering Damasak, Mallam Fatori, Magumeri, Gubio on high alert, as the Boko Haram terrorists usually launched attacks during the rainy season.