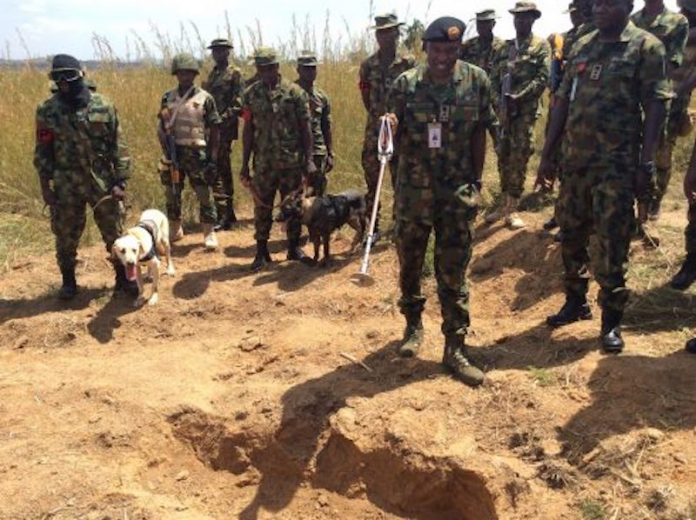 Kingsley Nwezeh in Abuja and Laleye Dipo in Minna

Troops of the Multinational Joint Task Force (MNJTF) have killed 64 Boko Haram terrorists and captured eight others after a fierce gun battle in the Lake Chad area.

The terrorists, however, killed 18 people, comprising 10 soldiers and eight civilians, according to a statement yesterday by the multinational troops.

This came as news broke yesterday that the death toll in the attacks on eight villages in Niger State, which began on Sunday, has risen to 57.

Over 1,000 others were displaced in the attacks on the eight villages in Shiroro Local Government Area of Niger State.
The MNJTF, in a statement by its spokesman, Col. Timothy Antigha, said the battle, which lasted several hours between troops of Sector 1 of the MNJTF and 300 Boko Haram fighters, occurred, on Tuesday in Darak, Northern Cameroon.
The MNJTF confirmed yesterday that 10 of its personnel were killed while eight civilians also died.
It said three Boko Haram boats were destroyed while many people were wounded.

“For the record, two days ago, about 300 heavily-armed Boko Haram terrorists invaded Darak. However, they were met with stiff MNJTF resistance resulting in a bloody gun battle, which lasted for several hours.

“At the end of the fire-fight, the following statistics were recorded: 10 MNJTF personnel killed in action; eight wounded and evacuated for medical attention; eight civilians killed and one wounded,” MNJTF said in the statement.
The statement added that “64 Boko Haram terrorists were killed while eight were captured and several wounded.
“Three Boko Haram boats were destroyed and several arms and ammunition confiscated.”

“This bold and ruthless response by the MNJTF is in keeping with the resolve of the force to make the Lake Chad Area untenable for terrorists of whatever persuasion, Antigha added.

MNJTF has, however, accused some local and foreign media organisations of slanting their stories to depict Boko Haram as winning the insurgency battle.

It said the casualty figure given by AFP in the Darak attack was unfortunate.

He stated that the emerging pattern of international and local media coverage of the crisis in the Lake Chad suggested sympathy and support for Boko Haram activities and narrative, at the expense of the efforts being made by a coalition of the armed forces of countries of the Lake Chad Basin.

“This pattern of coverage has been observed over a period, but the recent report of the clash between Sector 1 of the MNJTF and Boko Haram Terrorists in Darak in Northern Cameroon, which portrayed Boko Haram as being dominant, has called for serious concern.

“In this instance, the casualty figures quoted by the AFP and slant given by its local collaborator the News Express (online) are very unfortunate.

“The MNJTF understands that the news business thrives on timeliness. However, it is always desirable to ensure that facts and accuracy are not lost in the quest for urgency, in order not to give the impression that evil is favoured over good,” MNJTF added.

Antigha said the military task force was prepared to provide and confirm information within its area of operation.
“To facilitate the need of accuracy, the MNJTF is always ready to respond to requests for verification or confirmation of information on occurrences within its Area of Operation. The media is therefore urged to keep faith with a key tenet of the profession, which is the sanctity of facts”, he said.

Also yesterday, Senator David Umaru, representing Niger East Senatorial District in the National Assembly, briefed reporters in Minna on the attacks on the eight villages in Shiroro Local Government Area, which began on Sunday.
He said the death toll had risen to 57.

So far, at least 40 of the bodies have been recovered, according to the spokesman of the Niger State Emergency Management Agency(NEMA), Mr. Ibrahim Audu Hussein.

The bandits, who rode on motorcycles, fired indiscriminately at residents of the Niger villages and stole cattle.
However, Umaru’s death toll conflicted with that of the state police command, which put the casualty figure at 18.
Umaru said in the last six days, no fewer than 57 people had been killed while over 1,000 were displaced. Scores of other villagers were also injured.

Giving the report in Minna, the senator said 19 people were killed in Kwaki village, 14 in Barden Dawaki village while eight died in Ajatawyi village.
In addition, seven died in Gwassa, five in Ajayin Bataro, four others in Bwailo, three in Baton village and two in Giji village.

According to him, the injured are being treated at public and private hospitals within and outside the affected local government area.
Umaru called on President Muhammad Buhari to “come to the rescue of the innocent villagers by deploying military men in the area.

“I am also calling on the General Officer Commanding (GOC) of 1 Division of Nigeria Army, Kaduna, to deploy more personnel to save the villagers from the onslaught of the bandits,” he added.
The police, on their part, did not give details of villages where the casualties occurred but said only 18 people were injured.

The police spokesman in the state, Muhammad Abubakar, a Deputy Superintendent of Police(DSP), told THISDAY that normalcy had returned to the areas with the deployment of armed security men in the troubled communities.

The state Deputy Governor, Alhaji Ahmad Mohammad Ketso, has visited the injured at the hospitals where they were receiving treatment and assured them of government’s determination to secure lives and property.
Ketso who was accompanied by various heads of security agencies in the state, said the government would track down the perpetrators and also bring them to book.