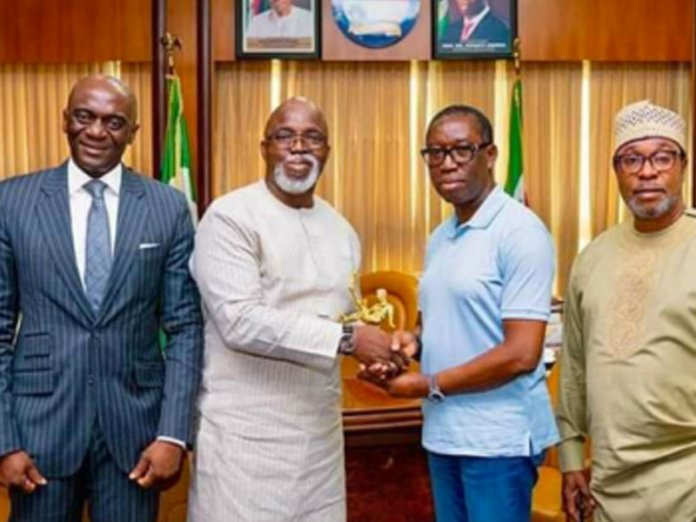 President of the Nigeria Football Federation, Mr. Amaju Melvin Pinnick on Wednesday in Asaba presented the award of Football Friendly Governor of the Year to Governor Ifeanyi Arthur Okowa of Delta State.

Governor Okowa won the award at the sixth edition of the Nigeria Pitch Awards held in Asaba on Saturday, but neither the Delta State number one citizen nor the NFF supremo were present at the occasion.

Pinnick, also the 1st Vice President of the Confederation of African Football, was summoned to France as a result of some issues related to CAF, and left Asaba on the eve of the awards, which held at the Golden Tulip Hotel hours after the Nigeria/Zimbabwe pre-AFCON 2019 sendforth friendly at the Stephen Keshi Stadium. NFF 1st Vice President, Seyi Akinwunmi represented Pinnick at the event.

“I am happy to present this award to Your Excellency, knowing that you are fully deserving of the gong going by what you have done for Nigerian Football in the past one year,” Pinnick said as he presented the award trophy and certificate to Governor Okowa.

The amiable governor has also handsomely rewarded players and officials of the Super Eagles on more than one occasion. His administration also sponsors several Clubs in the various Leagues in the country – a channel for youth empowerment.