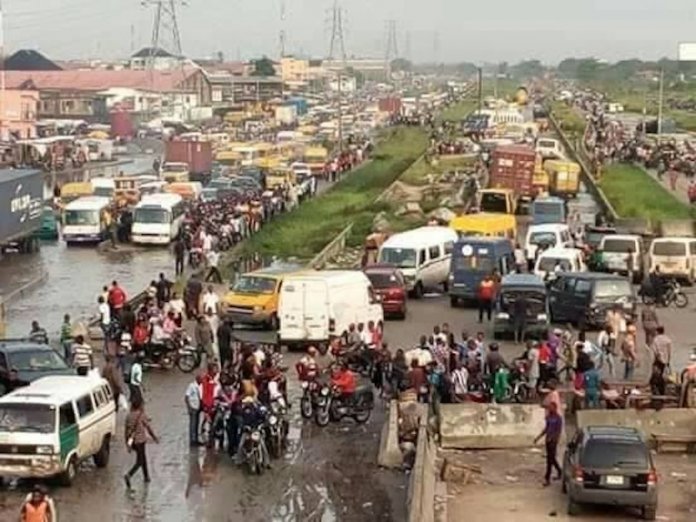 As the new Lagos State Governor, Mr. Babajide Sanwo-Olu, settles down to govern, bad roads and refuse are part of the areas residents urgently want him to address, writes Davidson Iriekpen

It was jubilation for Lagos residents who daily ply the Lagos-Badagry expressway as the state Governor, Mr. Babajide Sanwo-Olu, last week announced that work would soon commence at the Maza Maza-Iba junction up to Okokomaiko end of the road. He made the announcement when he toured the Badagry road and other areas to see the level of dilapidation and what the people are suffering in the course of moving from one place to the other.

This axis of Lagos, like most other parts of the state, was completely abandoned in the four years of former Governor Akinwunmi Ambode. This made residents to suffer untold hardship moving from one place to the other.

Sanwo-Olu said there would be a major clean-up of the road from National Theater to Maza-Maza, urging the traders who display their goods on the road to desist from doing such. He expressed dissatisfaction with the environmental situation in the area characterised by the huge pile of refuse, saying a task force would be constituted to carry out massive clean-up in the area.

The governor said he would “ensure that the commerce in the Western axis of Lagos come back; that is why we have come here. We should be able to complete the road from Maza-Maza to Okokomaiko before the end of the year or beginning of next year with the needed funds to do it.”

He disclosed that the state government would work with the federal government on the Okokomaiko, Agbara to Seme Border section of the road. He also visited the Lagos Homes in Igando and Iyana Ipaja to Abule Egba for inspection of construction works not yet completed and promised to complete them.

Also speaking with Muslim faithfuls at Lagos House, Alausa, Ikeja to mark 2019 Eid-el-Fitri, Sanwo-Olu informed the gathering that his government will soon release emergency hotlines to the public to call the state public works for immediate fixing of potholes and roads that need urgent repairs.

Knowing how Lagosians crave for good roads, the governor, a day after his inauguration, had signed an executive order, directing the state Traffic Management Authority (LASTMA) to run at least two shifts and work till 11p.m and the state Public Works Corporation to commence patching and rehabilitation of bad roads to address the perennial problem of traffic in the state. He said the order would also ensure the attainment of zero tolerance for environmental abuse, including illegal and indiscriminate dumping of refuse and construction of structures on drainage points and setbacks.

No doubt, bad roads and refuse are going to be two areas where Lagosians are going to constantly rate the performance of the Sanwo-Olu government from the time to time. In these two areas, the immediate past administration of Ambode was adjudged to have done abysmally. Apart from the Airport, Berger and a few others areas, the former governor neglected a large part of the state, particularly the suburbs.

All over the world, one of the indices of visible development are motorable roads but in Lagos and other parts of the country, not only are the roads bad, they are death traps. From expressways to the inner roads, it is a tale of neglect and abandonment, promises delayed or even out rightly forgotten, as Lagosians groan under dilapidated roads littered with crater-sized potholes and gullies.

Mushin-Isolo-Ikotun Road is a long and narrow stretch connecting commerce and residential areas in the state. Come day or night, weekday or weekend, the road is perpetually on lockdown. Repair works that were recently carried out in between Ile-Iwe Metta, Aye and Ire-Akari had been washed off. Same for Kogberegbe junction, Pako Roundabout, Jakande-Gate, NNPC Junction, Iyana-Ejigbo, Powerline bus stop, Agodo, Ile-Iwe and the descent inwards Ikotun roundabout. The narrative is not any different commuting from Ile-Iwe Ejigbo inwards Oke-Afa and Ajao Estate.

The ever-busy Ikorodu Road and Western Avenue are not spared. Failed portions dot most bus-stops, hindering free flow of traffic and causing accidents.

From time to time, people have questioned the whereabouts of the state government and even the local governments.

In the past, while the state government concentrated on major roads, local governments were given the task of fixing some inner roads. Under the immediate past government, the two tiers of government went to sleep, leaving the people to suffer. Lagosians spent more time constantly repairing their vehicles due to the state of roads in city.

So bad are roads and other infrastructure in the state that The Economist Intelligence Unit and World Bank in their 2018 Global Liveability Index recently, ranked it the third worst city for humans to live in the world. The state was ranked 138 out of the 140 cities considered for the ranking. This, however, was a slight improvement from the 2017 ranking, where the country was ranked 139th out of 140 cities on the index.

According to the ranking, Lagos only outperformed Dhaka in Bangladesh and Damascus in war-torn Syria. Out of an overall score of 100, Lagos was rated 38.5 points.

The ranking was based on social stability, healthcare, education, culture and environment and infrastructure. Other African cities that featured on the index were Dakar (Senegal), which was ranked 131 out of 140; Algiers (Algeria) – 132; Doula (Cameroun) – 133; Tripoli (Libya) – 134 and Harare (Zimbabwe) – 135.

Vienna, the Austrian capital, was ranked the most liveable city in the world, as Melbourne finally lost the title after a seven-year reign. The Japanese city of Osaka was adjudged the third most liveable city.

To know that the state government gets about N50billion monthly from both internally generated revenue and allocation from the Federation Account, yet the roads are bad is most annoying to residents.

Initially, to divert attention and exonerate itself from the accusation of incompetence leveled against it, one of the dummies the state government sold to the people was to designate some roads as federal roads and regularly blame the federal government for neglecting the state. This narrative has since been defeated with the All Progressives Congress (APC) controlling the federal and state governments and a former state Governor, Babatunde Fashola leading the Federal Ministry of Works.

When Ambode assumed power in 2015, his first task was to complete the road projects which his predecessor failed to complete before leaving, immediately winning the hearts of Lagosians. Such road projects were Ago-Palace road up to Cele Bus Stop and others. Soon after, he embarked on flyovers in Ajah, Abule-Egba, Pen Cinema. In no time, the governor was hailed as a messiah. But all the praises showered on him soon vanished as Lagosians found it difficult to drive through even less busy roads. That was when it dawned on them that he had failed. Today, some portions of these same roads cause motorists nightmare.

Lagosians feel that one of the reasons why Ambode failed was his total disconnection from the people. They allude to the fact that he was hardly seen and felt by the people. This is why beyond releasing emergency hotlines to the public to call the state Public Works for immediate fixing of potholes and roads that need urgent repairs, Lagosians feel that Sanwo-Olu should frequently visit every nook and cranny of the state to see things for himself and what the people are suffering in order to address them.