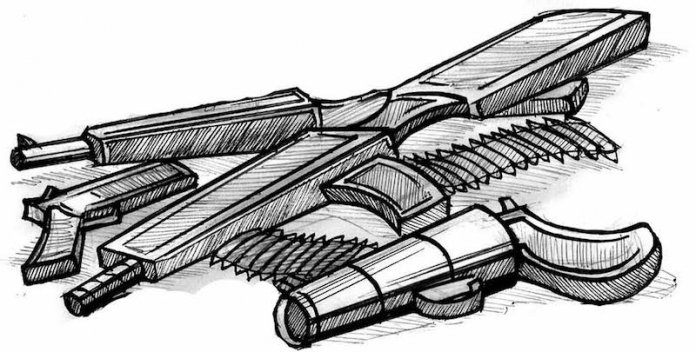 The order to retrieve registered firearms is ill-advised

In a nation where guns are flowing everywhere in the hands of ethnic militia men, armed robbers, kidnappers and sundry other criminal cartels, President Muhammadu Buhari has signed into law an executive order to remove, revoke, banish all firearm or shotgun certificate or licence. Going by snippets from the executive order which is yet to be made public, no private person in Nigeria will be allowed to legally own or carry prohibited weapons or gun. The pertinent question is: If people who legitimately own and registered their firearms are dispossessed while criminal gangs roam freely with guns, what exactly is the motivation behind this law?

A presidential order withdrawing existing gun licenses is a lazy approach to controlling gun related criminality. Nigeria, according to most reports, accounts for at least 70 per cent of the illegal small arms and light weapons (SALW) circulating within the West African sub-region. A few years ago, the then Chief of Army Standards and Evaluation, Major-General Shehu Abdulkadir said that “it is estimated that over 70 per cent of eight to 10 million illegal weapons in West Africa are in Nigeria.” There is nothing to suggest that the situation has changed. If the executive order is therefore informed by concern over rising insecurity, the president needs to rethink his strategy.

Nearly all the gun violence at the heart of our insecurity has nothing to do with licensed guns. We are under siege from unlicensed arms in the hands of bandits. That happens to be the position of the House of Representatives which has asked the president to immediately rescind his decision because it contravenes the law since an executive order cannot override an act of parliament. “The danger is that it will make all of us very vulnerable to attacks. We are pushing the society into chaos. If the government wanted to do anything new, it should have been re-certification, if there is need. If Mr. President wants all of us to be killed, I think he can take that decision, otherwise he should rescind it,” said Hon Chika Adamu from Niger State.

In order to rein in armed criminals, government in fact needs to reinforce existing gun legislation. What we need to tackle is illegal possession of the kinds of weapons being used to make the country difficult to govern. Under such a revised gun law, militia men and other sundry gunmen ought to qualify for lengthy prison terms on the mere basis of the illegality of such possession. Use of such illegal weapons to commit a crime should increase the penalty.

It stands to reason that with access to abundant illegal weapons the rogue elements in our midst have become more fortified and hence less amenable to entreaties to make peace. Yet it was such easy access to SALWs by some unscrupulous elements that resulted in total breakdown of law and order in some of the failed states in Africa of which Somalia is a prime example. The danger in the proliferation of weapons is that when they fall into the hands of non-state actors such as Boko Haram insurgents (or even the former Niger Delta militants before they were disarmed), they become objects of terror by people who have no regard for international laws and conventions.

As matters stand today, there are far too many guns out there that we need more than revision of licensing rules. Nigeria now needs a comprehensive nationwide arms decommissioning programme. We should start with a mass voluntary arms surrendering programme with incentives. This should be followed by whistle blower-assisted arms recovery process. Following from that, the authorities can then enact a comprehensive gun law as we seek practical solutions to the challenge of insecurity in our country.