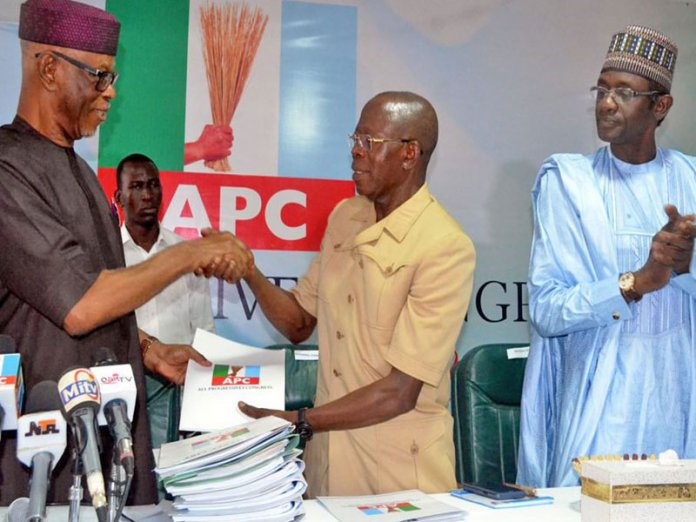 With the National Chairman of the All Progressives Congress, Comrade Adams Oshiomhole and his predecessor, Chief John Odigie-Oyegun locking horns and Senator Lawal Shuaibu calling for party chair’s head, the future of APC looks bleaker than brighter, Shola Oyeyipo reports

After the All Progressives Congress (APC) fumbled and wobbled to a second term victory at the general election, only a few were not expecting a spark soon after. That spark, however, came a penultimate week from the least expected quarters.
First, it was the Deputy National Chairman of APC (north), Senator Lawal Shuaibu, who fired a shot at his boss, National Chairman of the APC, Adams Oshiomhole via a letter.

Senator Shuaibu’s petition demanded Oshiomhole’s resignation. It took the APC national chairman to the cleaners, accusing him of being responsible for virtually every misfortune that has befallen the ruling party since the last general election.

Oshiomhole immediately sought protection from his kinsmen, the chairmen of APC in the six states of the South-south zone, who issued a statement expressing support for him. However, the South-south APC state chairmen in an attempt to exonerate Oshiomhole from possible blame for the loses recorded by the party that accused his predecessor, Chief John Odigie Oyegun of laying landmines that precipitated the APC pre-election crisis.

Senator Shuaibu had said in his letter dated May 27th, 2019 and titled: “APC: Its Fortune and Misfortune, Time to Act!”, that Oshiomhole lacked the requisite capacity to effectively run the affairs of the party, adding that the national chairman was always acting unilaterally, attacking and alienating prominent party men from the affairs of the ruling party.

He also accused Oshiomhole of diverting official meetings of the National Working Committee (NWC) to private residences, outside the national secretariat. Even more indicting was Shuaibu’s assertion that under Oshiomhole, most of the decisions purportedly reached were not backed by minutes of the meeting and that “where minutes were taken, they were doctored”.

He therefore regretted that the respect APC usually commanded among its members and sympathizers had been completely eroded, while its goodwill had equally evaporated with the type of attitude of threats to members that Oshiomhole often deploys, including senior members like governors, senators, ministers and other government officials whose functions do not fall within his jurisdiction.

“In advanced democracies, people, who fail to add value or build on what they met on assumption of duty normally resigns honourably. In that connection, therefore, I want to advise you to take the path of honour, to step aside and allow the party to embark on the onerous task of reconstruction and rehabilitation in those states that were weakened by the way and manner the last primary election exercises were conducted.”

Perhaps, Shuaibu’s letter was a response to Oshiomhole’s move to probe anti-party activities against some party bigwigs and stakeholders for their alleged roles in causing crisis during the party primary elections and the general election. The five-man committee was headed by the Deputy National Chairman (South), Otunba Niyi Adebayo.

Everyone had expected that some of the weighty allegations contained in Shuaibu’s letter would attract immediate response from Oshiomhole or the party, but there was studied silence at least for a one week.
It was the chairmen of the state chapters of APC in the South-south zone, where the former Edo State governor comes from that rose in defence of Oshiomhole and attacked Oyegun. In the process, it triggered what has now turned to a war of attrition between two brothers, former governors of the same state, Edo and also former activists in their own rights.
In a resolution jointly signed by the six South-south APC state chairmen, the zone passed a vote of confidence on Oshiomhole and blamed the electoral losses suffered by the party in some states on the alleged landmines created by Oshiomhole’s predecessor, whom they said were bent on destroying the party before departing.

The South-south state chairmen said they were surprised that Senator Shuaibu was just realizing the issues he raised barely a few days after the NWC set up a committee to “look into petitions against the highly placed party stakeholders, who were involved in anti-party activities that were responsible for the loss of the number of states mentioned in his letter”.
Those who signed the resolution were Hon. Ini T. Okopido, (Akwa-Ibom), Hon. Amos Lalabunafa (Bayelsa). Mr. John Ochalla (Cross Rivers). Others were; Prophet Jones Ode Erue (Delta State), Aslem U. Ojezua (Edo State), and Hon. Ojukaye Flag Amachree (Rivers State)

The chairmen, who held an emergency meeting in Abuja to consider issues raised by the deputy national chairman, said they did not find anything untoward in the stewardship of the party’s national chairman.

But there is an aspect of the statement by the South-south chairmen that angered Oyegun and woke up the tiger in him. It was where they accused him of laying the foundation for the present crisis that led to the misfortune of the party in the just concluded 2019 general election.
Reacting to the allegation that he laid landmines for the Oshiomhole-led national executive, Oyegun described it as “ludicrous and infantile and an attempt to dream up justification for the failings of the party under the Oshiomhole Chairmanship”.
In a statement issued last Sunday by his Public Affairs Adviser, Chief Ray Morphy, Oyegun said Oshiomhole failed, because he lacks the temperament required to run a big political party like APC.

Regarding the brewing crisis of confidence and the misfortune the ruling party witnessed at the last general election, the former chairman said the crisis in states arose out of sheer incapacity on the part of the current chairman.
“He engages his mouth before engaging his mind, so he offends party members, so how does that constitute booby traps by Oyegun, the erstwhile chairman.”
Oyegun said part of the poor sense of judgment Oshiomhole committed was when he gave the states the freedom to choose their methods of picking candidates for elections.

“How would you not have crises in states with the confusion that Oshiomhole created when he gave the states the freedom to choose their methods of choosing candidates for elections? Much of the crisis in states arose out of sheer incapacity on the part of the current chairman. How does this Oshiomhole’s incapacity become traps by Oyegun?

“Only a bad carpenter quarrels with his tools. Indeed Oshiomhole is degrading and de-marketing the party. Rather than seek to bring more people on board, he is chasing people out of the party with his agbero style of engagement,” Mr. Odigie-Oyegun said.
As if endorsing the position taken by the South-south state chairmen, the National Publicity Secretary of the APC, Mallam Lanre Isa-Onilu, quickly fired back at Oyegun, accusing of condoning impunity during his reign as national chairman of the party.

In a statement debunking the allegations made against Oshiomhole and his leadership style, Onilu said the new leadership of the party is much focused and has purged its ranks of bad eggs and trying to instill discipline amongst its ranks.

“I would put the painful outcomes broadly under two reasons. One is indiscipline on the part of some members of our party in most of the states. The second reason is that the party leadership did not do much between 2015 and 2018 to move the party from being an amalgam of different political parties to become a truly blended progressive political party.

“We expect members, who have different agenda to join their kind in PDP. We will welcome with open arms, those who share our progressive ideals, so that by 2022, we will have a party whose members are truly progressives.”

On the Oyegun-led NWC, Onilu said the past leadership of the party accommodated impunity, adding that certain members were superior to the party. He therefore countered Oyegun’s position, saying the immediate-past National Working Committee lacked the courage required to confront the pockets of political despots, who could not operate by the party’s rules.

“The resultant effect was widespread indiscipline across party ranks, lack of respect for party supremacy as witnessed in the 8th National Assembly leadership and its overall inability to align the varying interests of the legacy parties that came together to form the APC in 2014.”
Issa-Onilu blamed the loses recorded by the APC at the state levels on the actions of some of the state governors, whom he said acted against party’s instructions and had to pay dearly for their indiscipline.

At the moment, there seems to be no end in sight to the brewing crisis in the APC. It has been the same blame game coming from the stakeholders and unless something is done to call the warring parties to order, the situation might deteriorate further and become utterly injurious to the collective interest of members.

For now, all attention are focused on President Muhammadu Buhari to see what he can do to stop the infighting among the APC leaders and this, he has indicated interest to do.

For Oshiomhole, it would be instructive to note that Senator Shuaibu was part of a similar move to oust Oyegun during the time his NWC was tinkering with the idea of tenure elongation. The Zamfara state-born politician with the active support of ex-governor Yari, the former Imo State governor, Rochas Okorocha played out the script endorsed by one of the national leaders of APC, Asiwaju Bola Tinubu to ensure that Oyegun didn’t get a day added to his four-year tenure.

No doubt, the ongoing altercations amongst the leaders of the APC are not what the party bargained for, neither were they the best behaviour to expect of a party in power at the national level, whose primary role should be to provide the right energy and stable polity to enable its administration to deliver good governance. The party, no doubt, needs to buckle up or be ready to face the consequences of its obvious lack of direction.