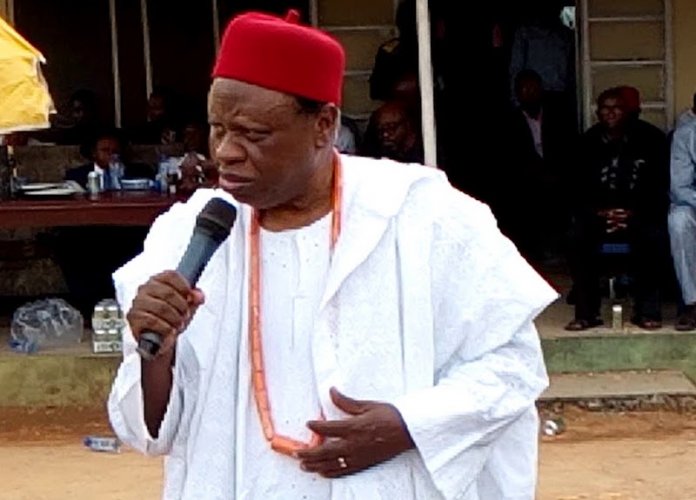 To many, Hyacinth Enuha will feel greatly relieved if his party, the All Progressives Congress, APC, triumphs in Delta State.
But Society Watch gathered that Enuha, a former director with the defunct Intercontinental Bank Plc, will be more relieved and even go to bed with his two eyes closed only if he is able to emerge victorious in an ongoing legal battle.

He may even need to embark on ceaseless prayers, as a Federal High Court sitting in Ikoyi, Lagos is hearing a suit he instituted against the Assets Management Corporation of Nigeria, AMCON. In the suit, the plaintiffs – Enuha, his wife, Carol and company, CINCA Nigeria Limited- are claiming that they are not indebted to AMCON to the tune of 7.500, 227,634.61.
However, the defendants – AMCON and Intercontinental Bank (now merged with Access Bank) – are urging the court to dismiss the claims of the plaintiffs as being “frivolous, vexatious, and completely unmeritorious”.

The respondents also prayed that the court award substantial cost against the plaintiffs.
In a statement of claim filed before the court on behalf of the plaintiffs by Olatunde Adejuyigbe ,SAN, it was alleged that CINCA Nigeria Limited, in October 2006, applied for and was granted a term loan in the sum of N2bn to purchase shares of blue-chip companies in Nigeria.

Though the bank was said to have traded with the shares and received full payment for the sale, it allegedly failed to disclose any information in respect of the transactions to CINCA.
Enuha stated that the total amount realized from the sale of the shares was well over N8bn, which was more than enough to liquidate the credit facilities granted to the company together with the accrued interest thereon.

The plaintiffs further claimed that the purported indebtedness of the company assigned to AMCON by the bank emanated from the manipulation of the proceeds of the company’s shares sold by the bank and for which no account was presented by the bank to the company.
Society Watch gathered that, in view of the spurious and illegal assignment of CINCA’s account to AMCON, it was included in the list of Top 100 AMCON debtors published by AMCON in various media platforms, with the plaintiffs’ names as directors of the company.

In a letter dated June 5, 2017, AMCON made a demand on CINCA for the sum of N7, 500,227,634.61, which is said to be the indebtedness of CINCA to AMCON.
The plaintiffs contended that the demand made by AMCON is “unlawful, baseless and unwarranted”; hence, they are seeking a declaration that the demand made on CINCA by AMCON, via a letter dated June 5, 2017, for payment of the sum of N7, 500,227,634.61 was “wrongful, illegal, null and void.”
The plaintiffs are also seeking an order restraining AMCON from making further demands on the plaintiffs for the payment of N7, 500,227,634.61 or any sum at all.
However, the bank, in a statement of defence filed before the court by Paul Usoro and company, denied almost all the claims of the plaintiffs, saying they represented absolute distortion and misrepresentation of facts.

In specific response to the statement of claim of the plaintiffs, the bank alleged that CINCA approached defunct bank and was granted a loan in the sum of N2bn for the purpose of financing its capital projects and assets acquisition, which the company had “willfully failed, refused and neglected to pay till date.”
It claimed that the offer was accepted by Enuha on behalf of the company as its Executive Chairman.
The bank denied that it was responsible howsoever for the utilization of the N2billion, as the term of the loan placed the control of the loan firmly in the hands of the company.

It also stated that prior to the application by the company for the loan and subsequent disbursement of same by the plaintiffs, it had been involved in several dealings in the bank’s shares as well as the shares of other companies, which were carried out through their appointed portfolio managers, Intercontinental Securities Limited, ISL
In purchasing IBPLC shares, it also stated that the company took unfair and unethical advantage of privileged insider information it had on shares of the bank through Enuha, who was a director in both IBPLC and CINCA Nigeria Limited at the time.

CINCA, under Enuha and his wife were said to have taken advantage of the insider information it had access to about IBPLC’s shares, which was bought at very cheap rates and later sold at sums equivalent to more than 300% of the purchase value.

In specific response, the bank, however, averred that CINCA was granted N850 million share loan for the purpose of financing the purchase of 50million of the now defunct Bank PHB shares made available for public subscription.

The offer was said to have been accepted by Enuha on behalf of the company, as its Executive Chairman on December 28, 2007.

It was gathered that the company did not meet all the conditions precedent to the granting of the loan, but Enuha, the alter ego of the company, used his status as a director of IBPLC in ensuring that the N850million share loan was granted without adequate documentation and prior satisfaction of the condition precedent.

According to the defence, “IBPLC was licensed to carry on banking business , so it did not possess stock broking license and could not have traded in the shares of the company or that any other persons.

“By virtue of 23rd of December, 2008 roll over consolidation offer, the tenure of repaying the outstanding sum of N2,821,838,736.45 was fixed at six years with 12months moratorium at 22.5% interest per annum and was to be repaid from the proceeds of sale of shares by the company and other cash flow.

“The roll over and consolidation offer was accepted by Engr. Enuha on behalf of the company as its executive Chairman on December 30, 2008.

“The bank shall, at the trial of this suit, find and rely on the said offer letter.”