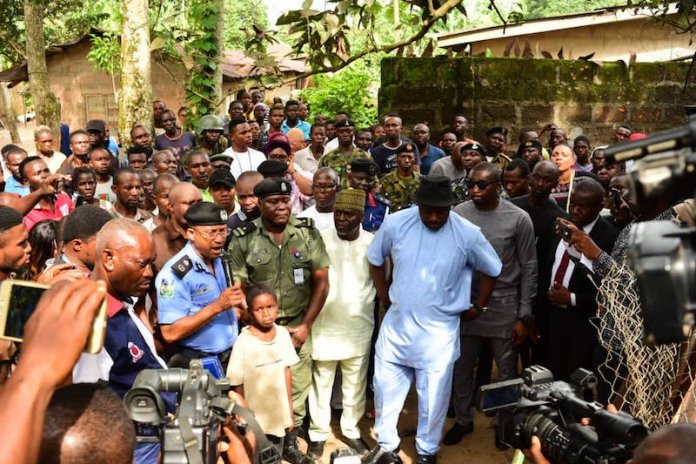 Imo State Deputy Governor, Hon. Gerald Irona yesterday visited Eziorsu community in Oguta Local Government Area of Imo State to commiserate with the families of those that lost their lives in Thursday’s bomb explosion that claimed the lives of three.

Speaking during the visit, Irona condoled with the people of the area over the incident, assuring them of the state Government’s support.

“The Governor of Imo State, Hon. Emeka Ihedioha sent me to, on behalf of himself and entire people of Imo State, condole with the Eziorsu community and Oguta LGA at large over the unfortunate incident that claimed the lives of three citizens of your area. The bomb blast is unfortunate. We will take steps to ensure that this does not happen again.”

Describing the incident as an accident, Irona urged people of the area not to take the laws into their hands, appealing that they remain peaceful He commended security agencies in the state for their swift intervention in the matter, urging them not to relent.

Speaking during the visit, Imo State Commissioner of Police, Rabiu Ladodo explained that the incident occurred when a scrap dealer engaged the services of one of the victims, who, in trying to compress an iron was killed, following the explosion of the Iron.

“He was hitting the hammer on the Iron, trying to compress it, before it exploded. The two other victims- one a passerby and another standing beside him were unfortunate.”

“On behalf of the Inspector General of Police, I advise people of Imo State to watch it. If you suspect any iron, don’t rush to it. Report to the Police. Everyone should be careful with Iron. I have arranged for a meeting with the Scrap Iron Union in the state. The meeting targets people in this line, but, this is a call on all to be careful with everything Iron.”

Reacting to the visit, President General of Eziorsu community, Prince Emmanuel Ukado thanked the State Government for coming to condole with them over the incident.

“Thank you for coming to see my people. We are consoled. We are glad that this government has remembered us. Your visit has given us hope. Your coming to sympathize with us shows that you have us at heart. It shows us that this new government will not abandon us.”

Speaking earlier, during a visit to his Palace, Traditional Ruler of Eziorsu community, His Royal Highness Eze Victor Ijeoma expressed appreciation to the Imo State government for the gesture, describing it as a sign that government is now closer to the people.

The delegation also visited the homes of the direct victims of the blast, where the State Government made cash donations in support of the families of the victims. A Similar support was extended to a survivor of the blast, Godbless Adieme.

It would be recalled that a bomb exploded last Thursday in Eziorsu community in Imo State, when a victim, ignorantly attempting to compress a rod (not knowing that it was a bomb) lost his life and those of other two following the explosion of the Bomb.

Responding to questions from newsmen during the visit, the Deputy Governor, Rt. Hon. Gerald Irona reiterated the determination of the present administration to respect the principle of separation of powers, while assuring Imo people of their commitment to securing lives and property in the state.

He also assured people of the area that the era of sharing funds meant for development of the area through the Imo State Oil Producing Areas Development Commission-ISOPADEC is over, saying, “we shall ensure that ISOPADEC works for the people.”