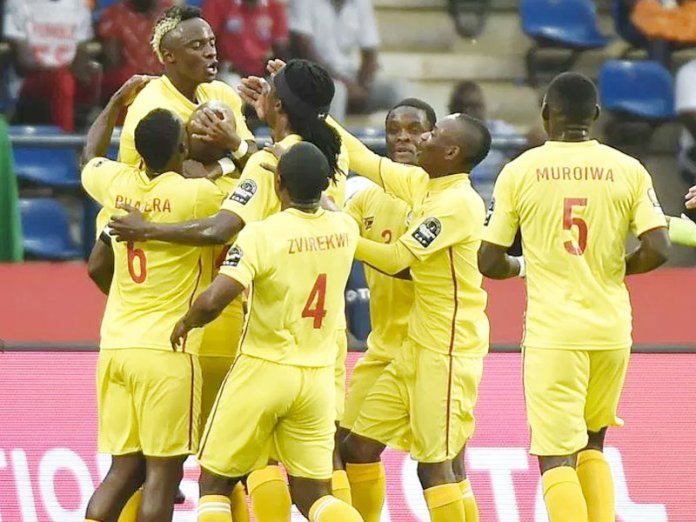 A 26 –man delegation of the senior national team of Zimbabwe, known as Warriors, will land in Nigeria on Thursday night aboard a South African Airways flight, ahead of Saturday’s pre-AFCON sendforth international friendly with the Super Eagles.

Thenff.com learnt the Zimbabwe delegation will spend Thursday night in Lagos, and fly to Asaba on Friday morning. On Friday evening, the Warriors will hold their official training session at the Stephen Keshi Stadium, venue of Saturday’s encounter that begins at 6pm.

Zimbabwe will campaign in Group A of the 32nd Africa Cup of Nations finals taking place in Egypt 21st June – 19th July, alongside host nation Egypt, Democratic Republic of Congo and Uganda. Nigeria is the seeded team in Group B that also has Burundi, Guinea and Madagascar.

The Warriors will actually kick off the tournament against hosts Egypt at the Cairo Stadium on the night of 21st June.
Meanwhile, three –time champions Nigeria have fully settled down in Asaba for the match, which is the first of their two remaining games leading up to the AFCON. Their last match is against Africa’s number one –ranked team, Senegal in Ismailia on Sunday, 16th June.

Of the 25 players invited by Technical Adviser Gernot Rohr for the final phase of the preparations, only defender William Ekong is expected to arrive on Thursday.

Defender Abdullahi Shehu and forwards Ahmed Musa and Alex Iwobi arrived the team’s Golden Tulip Hotel just before lunch on Wednesday, while forward Odion Ighalo, top scorer in the entire qualifying campaign, was expected on Wednesday night.
After Saturday’s game, the Nigeria contingent will fly to Egypt on Sunday aboard a chartered aircraft, for another week of intensive strategy and tactics perfection.

The NFF must submit the final list of 23 players to the Confederation of African Football by Tuesday, 11th June.