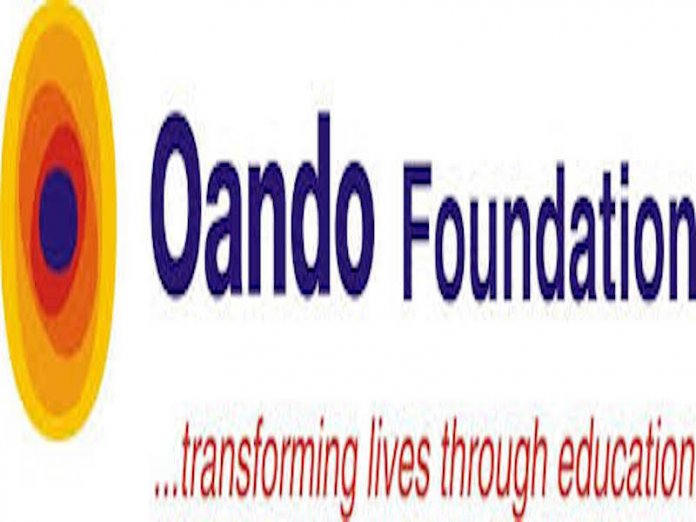 “Decrepit classrooms with broken down desks and chairs was what we used to have at LEA Bungha Gida Mangu Primary School, Mangu Local Government Area, Plateau State”, said the Headmistress, Mrs. Priskila Solomon-Dakai, as she described the pathetic condition of the school to journalists before Oando Foundation’s intervention.

She said the school was established 43 years ago, but was neglected by successive governments until 2017 when help came through the foundation.

According to her, “the school was established in 1976, now with a population of the school 305 pupils. I was worried that the government seems to have abandoned the school to its fate. When I came to this school in 2015, there was no collection of PTA levy then, so I called the attention of the community to collect levies to maintain the structure and enhance the classrooms, even some teachers contributed willingly towards it, but then the wind storm came and blew away the roof. Through community effort, we had to fix the school roof again in 2017, yet another windstorm came and pulled down the entire structure.

“We had to call on the education secretary, who took photographs of the dilapidation, went to the State Universal Basic Education Board (SUBEB) office where we were linked with the foundation. When they came they saw that the building was in pathetic condition and they came in to assist the school in 2017.”

The foundation recently inaugurated various infrastructure consisting of two blocks of six classrooms, furniture, boreholes, toilets and wash bays, as well as completed other projects across its five other adopted schools within the state, with the objective of addressing all the critical, but deplorable conditions necessary for improving academic standard in public schools.

The event was jointly organised by the Plateau State government and SUBEB, in collaboration with the foundation.

The Programme Manager for Oando Foundation, Ms. Tonia Uduimoh reiterated its commitment to improving learning environments across adopted schools in the country, saying, “we understand that the immediate environment where learning takes place is crucial to the overall learning outcomes of pupils, hence the reason we have heavily invested in ensuring that pupils in adopted schools learn under the right environment that will further enhance their learning capabilities.

“Infrastructure development is a key driver for progress across the African continent and a critical enabler for productivity and sustainable economic growth. It contributes significantly to human development, poverty reduction, and the attainment of the Sustainable Development Goals (SDGs).”

She stressed the importance of community participation for school improvement process, saying, “we saw support at the SUBEB level and we said to ourselves that whatever we can do to support learning in this school we will. This is the only school that serves quite a number of children within the community. We have provided two blocks of six classrooms which is still not enough. Now that there are proper structure, more children are coming, we build teachers’ capacity and develop ICT. You can see from the faces of the children, they are happy that something positive has come to their community.”

Uduimoh appealed to government and other corporate bodies, private sector in areas they operate to ensure that the needs of the teachers and learners are adequately met for better learning outcomes.

In his remarks, the Deputy Governor of Plateau State, Professor Sonni Tyoden, who commissioned the project, expressed delight about the foundation’s effort in the education sector within the state, saying that it will help drive efficiency and effectiveness in the process of teaching and learning. He appealed to the teachers, pupils and members of the community to be cautious in handling them so they can last for a longer time.

“Let me use this opportunity to appeal to the traditional rulers across the state to take interest in the management of public primary schools in their domain. They can assist in the monitoring and supervision of teaching, learning activities and report any unwholesome situation(s) to the relevant authorities for necessary action”, he said.

The Chairman, Plateau SUBEB, Professor Matthew Nshim Sule opined that the foundation’s initiative may have been predicated on the high rate of out-of-school children in the country, as well as the restricted school access which public school offers to the teeming population of the lower socio-economic status children.

He explained why there has been no government presence in the community over the years, saying that it is due to overwhelming demand to public education, limited fund and dwindling resources.

He said he believes that the Public Private Partnership (PPP) initiative will go a long way in enhancing socio-economic and political development of the country.

“Indeed, the participation of the private sector in the task of building a virile nation is imperative, as government does not have all the resources to deploy for the overall development of the nation. Thus, it has continually invited the private sector and particularly development partners to collaborate with it for the purposes of improving on the quality of education at different levels.”

Sule commended Oando Foundation for the intervention, while promising that the adopted schools will not be neglected, but accorded attention in the areas of capacity development of school facilitators, consideration of school officers and teachers for periodic training, support of PTAs and SBMCs by the board’s social mobilisation officers, among others.

The Education Secretary, Mangu, Mr. Usman Mohammed said education is the responsibility of all and that government alone cannot do it, adding that there are so many schools that need intervention.

The House Committee Chairman on Education, Honorable Idris Ahmed said, “it is a welcome development from Oando Foundation worthy of emulation by other private organisations and individuals. What they are doing is to complement the efforts of the government in ensuring a conducive environment in our public schools. Though there are so many dilapidated structures in most of our public schools, the state is doing its best.”

The Chairman, Nigeria Union of Teachers (NUT), Mangu chapter, Mr. Isaac Dapul said, “as a teacher, we do not only press home our demands concerning our salaries, our concern mainly also to touch the lives of the pupils which is determined by the environment in which they learn. So we ensure that we put on government’s notice that schools can be seen as a second home when they come to learn.

He said the union usually encourages the PTA and SBMC to ensure that schools that are dilapidated are repaired so that pupils can learn in a conducive environment.

“In all our schools, you will discover that there are a lot of projects embarked upon by the SBMC and PTA,” he said, while appealing to them to sit up. “You will also discover that since establishment, there has been no government presence in some public schools. The government should identify such schools and give them a helping hand so that they can have good structures.”