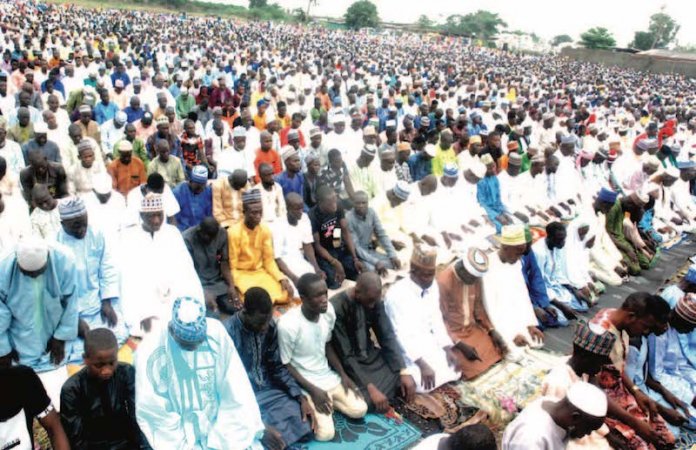 As Nigerian Muslims celebrate Eid-el-Fitr to mark the end of Ramandan fasting, a cross session of state governors yesterday including Imo State Governor, Chief Emeka Ihedioha and the National Chairman, Peoples Democratic Party (PDP), Prince Uche Secondus felicitated with Muslim faithful on the successful completion of the Ramadan fast, wishing them a joyous Eid-el- Fitr, and urging them to promote peace, tolerance and patriotism.

Ihedioha noted that Eid-el-fitr, which marks the completion of one month Ramadan fast, is characterised by charity, love, worship, and forgiveness, adding that it is a period of total detachment from pleasure in pursuit of spiritual rebirth and upliftment.

He admonished the Muslim faithful to use the occasion to reflect on the lessons of Ramadan to move the State and Nigeria forward.

On his part, Secondus,urged Nigerians to use the period of Eid-el-Fitr to reflect on the situations in the country and pray fervently for the survival of the nation.

He said in a Sallah message to mark the end of the 30-day Ramadan fasting period by the Muslim faithful, that the situation in the country was still dicey and discomforting, hence needs God’s intervention.

In a statement from his media office, signed by Ike Abonyi, the party’s national chairman said that after four years in the hand of the ruling All Progressives Congress (APC), all indicators point to the fact that Nigeria as a country is under severe pressure that need prayers and commitment of all to survive.

The PDP boss said that everything points to it that President Muhammadu Buhari’s administration has failed woefully in harnessing the abundant human and material resources in the country and has instead resorted to various undemocratic acts to thwart the will of the people.

Yobe State Governor, Alhaji Mai Mala Buni, has enjoined Muslims all over not to neglect the needy but show them compassion.

“Ramadam fasting strengthens in the Muslim community the values of love of justice, equity and unity among other cherished virtues.”

Okowa Felicitates with Muslims on Sallah

Delta State Governor, Senator Ifeanyi Okowa, has felicitated with the Muslim community on the celebration of the Eid-el-Fitri, saying that though Ramadan fast is over, it is important that the lessons of the season are sustained and replicated in their daily lives for the good of society.

He congratulated all Muslims for successfully completing this year’s Ramadan fast.

In a Sallah message yesterday in Asaba, Okowa urged the Muslim community to pray for the unity and peace of the nation as they celebrate. He urged Nigerians to promote religious tolerance, adding that such virtue would ensure peace across the country and enhance national development.

“I will like to remind Nigerians of the importance of respecting the faiths and beliefs of all and enjoined all Muslim faithful and Nigerians in general to use the occasion of the celebration for sober reflection and pray for peace, unity and progress of the nation,” he said

Bauch State Governor, Senator Bala Abdulkadir Mohammed, has called for tolerance and peaceful coexistence among the various ethno-religious and political communities in the state.

The governor who made the call in his Sallah message to the people of the state signed by his spokesperson, Dr. Ladan Salihu assured that “Government will continue to work for the peaceful coexistence amongst the various ethnic groups and individuals in the state.”

Mohammed added that the protection of lives and properties of the entire people of Bauchi State is paramount to his administration.

While thanking the people of Bauchi State for giving him the mandate to serve them, he reiterated his pledge to provide basic amenities in order to improve their general wellbeing.

The governor also called on people to make necessary sacrifices and reflect on their spiritual commitments during Ramadan as well as help the less privileged.

Ekiti State Governor, Dr. Kayode Fayemi, has congratulated Muslim faithful in the state and in the country in general on the celebration of the Eid-el-Fitri, which marks the end of the Ramadan period.

The governor in his Eid-el-Fitri message, in Ado-Ekiti yesterday, congratulated Muslims on the successful completion of the Ramadan fast, stressing that witnessing another Eid-el-Fitri is a special privilege from the Almighty Allah and not by power or might.

Fayemi said the 30-day spiritual exercise had drawn the faithful closer to Allah. He, therefore, urged them to put all the lessons learnt during the holy month into good use, especially in their daily dealings with fellow citizens.

He said current situation in the country and in the world at large has made it imperative for Muslims and adherents of other religions to live in love, peace and harmony with one another so that they can collectively confront and arrest the menace of violence and banditry.

Governor Mohammed Inuwa Yahaya of Gombe State has called the Muslim Umma in the state to sustain the tempo and momentum of the supplication, devotion and prayers for the peace, security and prosperity of the state and Nigeria as a whole.

The governor made the call during his first Sallah goodwill message to the state in a release signed and made available to newsmen by his Senior Special Assistant on Media and Publicity, Imaila Uba Misilli.

Yahaya enjoined the Muslim faithful to replicate in their daily lives, the lessons learnt in the holy month of Ramadan.

The statement quoted the governor as saying, “As we celebrate the Eid-el-Fitr festival, I want to admonish us to learn from the good lessons of Ramada which connotes piety, obedience, and selflessness. We must all imbibe the tenets Islam which promotes peace, tolerance, modesty and love.”

Governor David Umahi of Ebonyi State has commended the Muslim faithful on peaceful cohesion in the state while he stressed for continuous prayer, supports, collaboration for more development in the state.

Umahi made the commendation in Abakaliki when Muslim communities in the state paid a Sallah homage to the governor.

The governor, who was represented by his Deputy, Mr Eric Igwe acknowledged the fact that Muslim communities in the state contributed to the successful 2015 and 2019 general elections in the state.

“The state government attests to prayers of the Muslim communities during elections.

“We encourage you to continue in the peace existing and also grateful for remaining resolute.

“We appreciate your supports and collaboration to ensure peace in the state,” Umahi said.

Nasarawa State Governor, Abdullahi Sule, has implored all Muslims in the state to remain steadfast in applying the virtues of Ramadan through sustained supplication, hospitality and good neighbourliness.

The governor stated this in his Eld-el-Fitr message in Lafia, the state capital, adding that the spirit of sharing in the daily activities of the people should be sacrosanct.

He said: “All good citizens of Nasarawa State should continue to pray for the peace, security and economic prosperity of the state. Let me reiterate my call to the people to be law abiding and live peacefully with one another.

“Government will not condone any acts capable of breaching the existing peace in our society and will deal decisively with any individual and group whose stock in trade is to perpetuate crime and fan embers of disunity among the diverse ethnic nationalities in the state.”

The Emir of Kano, Alhaji Muhammadu Sanusi II, yesterday urged political leaders in the country to give attention to female education as they did with their male counterparts.

Sanusi spoke in Kano shortly after he led the Eid prayers at Kofar Mata Central Eid Ground, adding that “The people need to prioritise their commitment toward the education of females just like their male counterpart”.

The emir who met face to face with Governor Abdullahi Ganduje for the first time since the creation of four additional Emirates in the state, said there was need for Nigerians to continue to pray for peace and progress of the state and the country at large.

The emir also advocated for the rights of the girl-child to education and urged Muslims to fear God in all their activities, reminding them that each and every one of them must give account of his or her deeds hereafter.

Imo State Governor, Chief Emeka Ihedioha, has felicitated with Muslim faithful on the successful completion of the Ramadan fast, wishing them a joyous Eid-el- Fitr, while urging them to promote peace, tolerance and patriotism.

hedioha noted that Eid-el-fitr, which marks the completion of one-month Ramadan fast, is characterised by charity, love, worship, and forgiveness, adding that it is a period of total detachment from pleasure in pursuit of spiritual rebirth and upliftment.

He admonished the Muslim faithful to use the occasion to reflect on the lessons of Ramadan to move the state and Nigeria forward.

“Let me reiterate the commitment of my administration to good governance, due process, inclusive government, transparency, overall wellbeing of the citizens and religious harmony

“The task of rebuilding our state involves all, irrespective of religious affiliations. And in line with the policy of our government, we will give religious adherents a conducive atmosphere for a peaceful practice,” he stated.