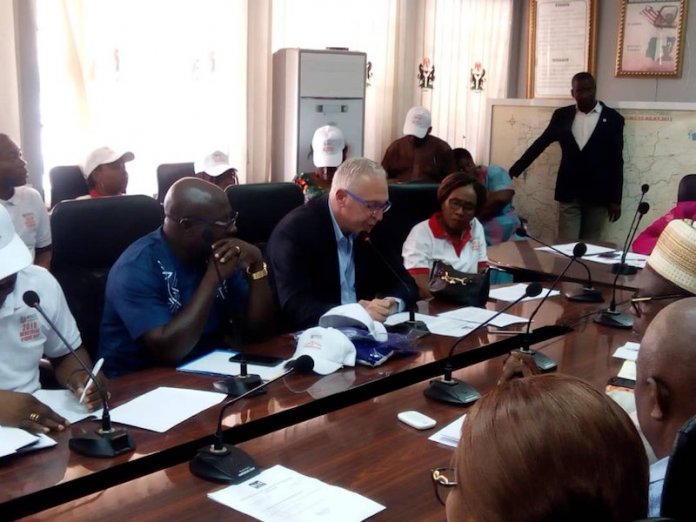 The federal government has urged parents to educate their children on the need for them to maintain proper sanitation and hygiene during menstruation as these reduce the risk of infectious diseases.

The WASH Ambassador, Engr. Ebele Okeke stated this in a good will message during the inauguration of Menstrual Health Management (MHM) Technical Working Group (TWG) by the Minister of Women Affairs and Social Development, Aisha Abubakar.

The event, which was in commemoration of the 2019 Menstrual Hygiene Day, organised by the FMWASD in collaboration with the Water Supply and Sanitation Collaborative Council (WSSCC), Action Against Hunger, UNICEF, WaterAid and other stakeholders.

She said WSSCC believes that no one should be left behind and that menstrual hygiene management should be brought to the attention of the girl child and women. She recalled that WSSCC in collaboration with the FMWASD successfully took a memo to the National Council meeting of the ministry held in Lagos in July 2018 and this resulted in institutionalising MHM at the federal and state ministries of Women Affairs.

She added that it was important to appeal to everyone to break the silence and create adequate awareness on MHM.

The meeting took place at the Minister’s conference room, Federal Ministry of Women Affairs and in attendance were the Minister of Women Affairs, the Permanent Secretary, Directors and Assistant Directors, the WASH Ambassador, members of the NTGS, including the Ministries of Environment, Water Resources, National Orientation Agency, Youth WASH, WASH Media, WSSCC, UNICEF, Action Against Hunger, JICA, and WaterAid, among others.

Minister thanked WSSCC for the bold stride especially in the bid to collaborate with the ministry in the institutionalisation of MHM in her activities nationwide. She also commended WSSCC for the bold step of building the capacity of the WASH sector in the just concluded Training of Trainers workshop in March this year and most importantly for making the ministry take the lead in championing MHM cause in Nigeria. She lamented over the unaffordability of menstrual products due to excessive cost and lack of sanitation facilities in institutions and communities for the dignity of women and girls which she believes infringes on their human rights. She admonished the ministry to continue raising the awareness and driving the campaign for affordable menstrual products and sanitation facilities in institutions and implored all development partners to continue supporting the cause of women and girls. She concluded it’s high time the government, media, development partners, private sector and civil societies stand up and advocate on polices, and dialogues and break the silence on menstruation. She pledged her support and thanked all for coming.

This was followed by the inauguration of the technical working group committee on MHM to scale up the activities of MHM in Nigeria by the Minister. She admonished the committee to work towards achieving its goal and drive the campaign on MHM nationwide. The committee comprises of a fifteen man team drawn from line ministries, development partners, WASH media and youth WASH.

The Permanent Secretary, Mrs. Ifeoma Anagbogu said it was disheartening to note that majority of women across the world do not have access to disposable sanitary towels and as such use pieces of cloth and toilet paper to manage their menstruation.

She applauded the inauguration of the TWG, saying the initiative would provide much needed direction in the design and implementation of relevant programmes/activities aimed at scaling up response on MHM good practices.

Also in his message, the Chief of WASH (Water, Sanitation and Hygiene) for UNICEF commended the FMWASD for the great stride of the institutionalisation of MHM and also said his organisation is committed to supporting the drive of the MHM campaign and pledged their support both technically and financially.

Furthermore, the representative of the Ministry of Education conveyed the message of his minister, saying that every 28th May globally, every year, MH day is celebrated to draw the attention of the general public to the plight and stigma women and girls face during menstruation. He said this day calls for advocacy and sensitization on how to break barriers surrounding menstruation. He concluded by calling on all stakeholders to join hands with the ministry of Women Affairs in the provision of WASH facilities, support capacity building of staff and to implement behavioral changes that will bring about positive attitudes towards personal and environmental sanitation including MHM. Finally he implored all to join hands with girls, women and mother because menstruation is their pride.

Subsequently, the representative of the Minister of Water Resources in convening his message said, her ministry acknowledges the challenge of the provision of safe water and is committed to pursuing the collaborative efforts required in addressing the issue. She also stressed the importance of dialogue and education at home and in school to foster engagement with this issue.